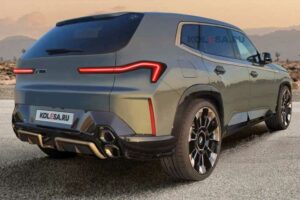 The M1 follow-up is far from being a direct successor since the mid-engined coupe has been completely transformed into a plug-in hybrid SUV. At about 2,700 kilograms (5,952 pounds), the heaviest car BMW will ever make is also going to be the most controversial (to date) in terms of design. The luxobarge is debuting in production guise later this year, but recent spy shots of a barely disguised prototype have largely revealed the wild exterior.

The spy shots have now served as the foundation for what we believe is an accurate (but still unofficial) rendering of the 2023 XM. Don’t expect the road-going model to look significantly toned down compared to last year’s namesake concept. The huge kidneys (or should we call them nostrils?) will remain virtually intact, and so will the unusual split headlight we’re already seeing on the new 7 Series / i7 and the X7 facelift.

The imposingly large SUV will ride on 23-inch wheels, which are the largest ever fitted by a BMW on a production car. Their design will be borrowed from the Concept XM and housed within glossy black wheel arches. From the side, the XM is going to look truly sporty, with hints of Lamborghini Urus if we might add.

Even in the lesser configuration that will be available at launch, the XM will become the most powerful production BMW ever. The base model – if we can call it that way – will make do with “only” 644 horsepower and 881 Newton-meters (650 pound-feet) of torque whereas the Competition version arriving later in 2023 is going to pack a mighty 750 hp and 1,000 Nm (737 lb-ft).

Let’s face it. The XM certainly won’t be the car enthusiasts had been hoping in 2022 on the M division’s 50th anniversary. Seeing the glass half full, there are juicy rumors of an M4 CSL-based special car with a manual gearbox, 600 hp, and retro styling derived from the 2015 Hommage concept. Capped at just 50 cars, it’ll reportedly be called “3.0 CSL” and cost more than €700,000.