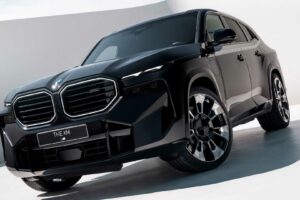 “Extravagant” and “distinctive” are the words used by BMW to describe the boldly styled XM. The plug-in hybrid SUV returns in a complete gallery with no fewer than 180 photos showing the sporty beast from every conceivable angle. What caught our attention is the black version without the gold accents while retaining the 23-inch wheels. The dark look hides the main headlights even more and also makes the large front grille less intrusive.

Touted as having a “compromise-free design,” the 2023 XM is wider than any other BMW on sale today, at 2,005 millimeters (nearly 79 inches). Although we’ve already seen the split headlights on the 2023 X7 and 7 Series, they still look polarizing. Having individual clusters for the upper daytime running lights and low/high beams behind a darkened panel positioned below is unusual.

The kidneys are smaller compared to what the 2021 Concept XM had and feature an illuminated contour to stand out furthermore. You’ll notice a charging port on the front-left fender, mounted below a prominent XM gold badge. An even bigger logo has been installed on the tailgate where there’s no BMW badge. Instead, there are two roundels in the upper corners of the rear glass as a nod to the mid-engined M1.

Extremely wide taillights lend the XM’s derrière a dominating presence while those hexagonal stacked exhaust tips flanking a massive diffuser are a first for a BMW M model. It’s worth pointing out that the electrified SUV has the same wheelbase length as the X7 but will be sold exclusively with two rows of seats. The gently sloped roofline follows other high-end SUVs beaten with the coupe stick, including the Lamborghini Urus and BMW’s very own X6 M.

The XM is unquestionably a sight to behold and looks substantially different than the current crop of fully fledged M SUVs. BMW projects its main markets will be the US, China, and the Middle East but the high-performance luxobarge will also be sold in Europe and other regions. It’s certainly not the M1 successor enthusiasts had hoped for the M division’s 50th anniversary.

With wealthy people enamored with high-end SUVs, it looks like Munich has another great seller on its hands. A low-volume supercar would’ve been a great way to celebrate half a century of M, but it’s not happening. However, BMW will unveil a 3.0 CSL in November as a modern equivalent of the original E9 CSL. It’ll combine a manual gearbox with rear-wheel drive in a retro-styled body while having slightly more power than the M4 CSL upon which it’ll be based.