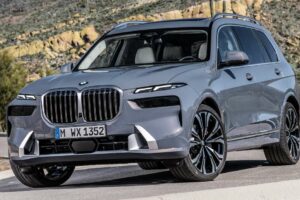 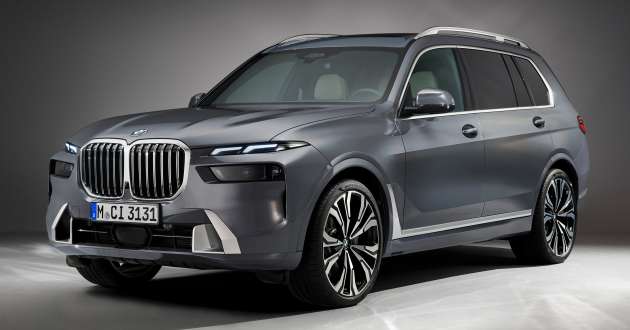 Here it is, the newly facelifted G07 BMW X7. The brand’s largest Sports Activity Vehicle (SAV) first burst onto the scene back in 2018 to take on the Mercedes-Benz GLS, and after approximately 3.5 years, it has now been given a significant refresh to continue that mission.

The most obvious changes are seen on the outside, where the X7 sports a much bolder appearance than ever before. The grille is still as large as you remember, and it now comes with new vertical bars that not only have a bi-colour look and chrome elements. Additionally, it also be specified with the Iconic Glow package so it’s illuminated with cascade lighting that can be switched off via the iDrive menu if being discreet is important.

Joining the tweaked grille are horizontally split LED headlamps, where the slim upper portion is for the daytime running lights and indicators, while standard adaptive matrix LEDs takes their place at the bottom. This stacked setup doesn’t leave much room for corner intakes, so small, vertical slits are carved into the bumper just beneath the primary lighting unit.

The bumper itself also gets reprofiled to have contours that guide air into those side inlets, and the lower apron gets prominent angular structures that frame the lower intake. While the face of the X7 has changed dramatically, the sides remain largely familiar and BMW says you’ll get roof rails with an aluminium satinated finish as standard, with a choice of chrome or aluminium trim for the strips that run from the air breathers to along the side skirts and towards the rear. 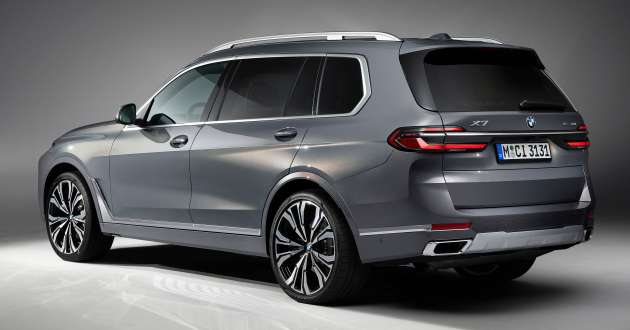 It’s a similar story when viewing the SUV from the rear, with the only notable revision being new L-shaped taillights that come with 3D sculpting, horizontal indicators and side graphics – the two light units are linked by a chrome bar enclosed within a glass cover.

It should be noted that what’s been described so far is the look of Design Pure Excellence styling package that is now standard for the X7, but if it’s too “boring” for your liking, there’s always the M Sport route.

With the M Sport package, the X7 appears more menacing thanks to a larger lower air intake at the front, which is complemented by trim on the outer edges of the air curtains in high-gloss black. The finish is also applied on the roof rails, side window surrounds, air breathers and the adjoining trim strips, while the rear gets an inlay in Dark Shadow and trapezoidal exhaust tailpipe finishers.

BMW also offers an M Sport package Pro that adds on extended M Shadow Line trim, so the kidney grille surround is finished in matte black and the tailpipe finishers in Black Chrome, along with M Sport brakes with black calipers. Wheel sizes start from 20 inches and go all the way up to 23 inches, with the latter being made available as a factory-fit option for a BMW model for the first time. Of course, there are plenty of customisation options available depending on your budget.

Inside, the X7 gets the BMW Curved Display which is already found in other BMW models like the i4 and iX. Part of the default Live Cockpit Plus system, in the big SUV, the setup is made up of a 12.3-inch digital instrument cluster and a 14.9-inch touchscreen, both powered by BMW Operating System 8.

Just like in the i4, the favourites row has been omitted, and small panel beneath the touchscreen simply houses basic media controls, the hazard light button and defogger controls. The air vents have also been reshaped too, with those located in the centre of the dash being a lot slimmer than before. They are joined by an illuminated ambient light bar on the passenger side with an X7 or M graphic depending on the specified styling package.

Elsewhere, the centre console now comes with a small switch to change gears instead of a conventional lever, with everything else like the drive mode buttons, iDrive controller and other vehicle controls being the same as before.

The X7 continues to come with three rows of seats in a 2-3-2 layout (seven seats), or a 2-2-2 arrangement (six seats) when specified with two individual seats in the second row. With all seats in place, there’s 326 litres of boot space, which can be expanded to 2,120 litres when the second and third row are folded down. 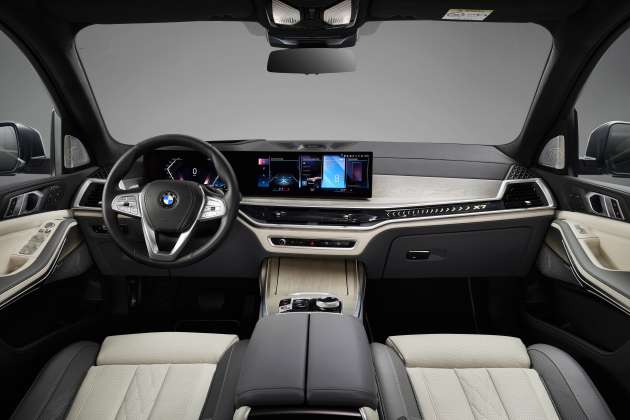 The split tailgate is still here, but it now allows for hands-free opening as part of the Comfort Access package that comes standard. On that note, BMW says the X7’s default kit list also includes heated comfort seats for front passengers, a three-section Sky Lounge panoramic glass sunroof as well as a ten-speaker hi-fi speaker system.

Naturally, there are plenty of options to bring up the price tag, including a 16-speaker Harman Kardon or 20-speaker Bowers & Wilkins sound system; a Travel & Comfort System for more USB ports; accessories for the quick connectors on the backrests of the front seats; a bevy of trims and upholsteries; and a host of M Performance Parts.

Moving on to the mechanical bits of the X7, all engines being offered come with a 48-volt mild hybrid system that squeezes an electric motor rated at 12 PS (12 hp or 9 kW) and 200 Nm of torque into the housing of the also-standard eight-speed Steptronic Sport automatic transmission (with Launch Control and Sprint functions) – xDrive all-wheel drive is also standard.

According to the German carmaker, the battery for the mild hybrid system is in the engine compartment and is charged via energy recuperation during coasting or braking phases. It supplies the electric motor to provide an output boost depending on the driving situation, and in the xDrive40i, also allows for pure electric driving at very low speeds.

Beyond the engines, adaptive two-axle air suspension with electronically controlled dampers comes standard to manage the X7’s heft and allows for a ride height adjustment range of 80 mm. Rear-wheel steering (Integral Active Steering) and active roll stabilisation (Executive Drive Pro) are also included with the M60i xDrive along with M Sport brakes, but these are options for other variants. 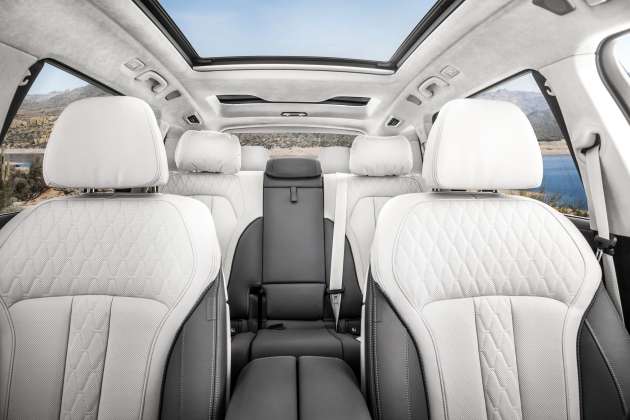 Finally, safety and driver assistance systems have been improved in the X7. For instance, the front-collision warning system now also reacts to oncoming traffic and warns the driver of pedestrians and cyclists approaching the vehicle parallel to the road from the front or rear when turning left or right.

To help with parking, the optional Parking Assistant Professional improves the Reversing Assistant so that it can store steering movements for distances of up to 200 metres (up from 50 metres) and then reproduce them in reverse.

The new X7 will be produced at BMW Group Plant Spartanburg, in the state South Carolina in the United States, with the worldwide market launch for model set to begin in August this year. The pre-facelift X7 we have here is locally assembled (CKD) in Malaysia and is available with a xDrive40i powertrain and in the Design Pure Excellence specification.