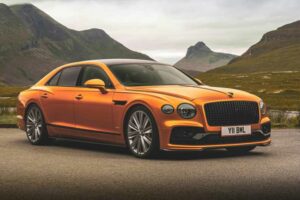 With Bentley on track to go all EV in 2030, its iconic W-12 has an expiration date, we just didn’t know until now exactly when that is. The 2023 Bentley Flying Spur Speed will be the final vehicle with a new W-12 engine from the band at Crewe. Fortunately, it looks to live up to the voracious performance this unique engine is made for thanks to more power, more torque, and a refined ride that includes Bentley’s “Dynamic Ride” and electronic all-wheel steering systems as standard. Even with all of that performance, the luxury the Flying Spur is known for won’t be lost.

The 2023 Bentley Flying Spur Speed is set to return as the top model of the Flying Spur lineup. It’s going to let you know it as its 6.0-liter twin-turbo W-12 engine comes with 617 hp and 664 lb-ft of torque, which is 84 hp and 96 lb-ft more than the V-8-powered Flying Spur S gets. (Keep in mind that Bentley used to offer the W-12—with less power, of course—in the regular, non-Speed Flying Spur, but dropped the option; that makes the Speed the only way to get the twelve in Bentley’s sedan.)

That extra power is good for 0.4 second chopped off the Flying Spur’s 0-60 mph time and a top speed of 207 mph, according to Bentley. Oh, and if you want to reach the Speed’s maximum, er, speed (207 mph), you’ll only use up to sixth gear; seventh and eighth are overdrive gears for “economic grand touring,” according to Bentley.

As on regular Flying Spurs, the big sedan’s agility is aided by Bentley’s Dynamic Ride, which uses a 48-volt system that manages the stiffness of the anti-roll bar for better body roll control. Further cornering augmentation comes in the form of Bentley’s brake-controlled torque vectoring and electronic all-wheel steering system that works with the AWD system. Finally, the Flying Spur Speed shares two items from the Continental GT coupe: The ZF dual-clutch eight-speed transmission, which offers the driver direct control of the shifting in manual mode, and the 16.5-inch iron front brake rotors, which share the title of the largest of the type fitted to a production vehicle with the Conti.

The standard Flying Spur Speed comes with dark finishes on the front grilles, head and tail lights, and comes with signature “Speed” badges on the lower portion of the front fenders, just behind the wheel wells. These elements are also joined by two unique 22-inch wheels, the standard Dark Tint “Speed” option and the Gloss Black and silver-accented Sport style.

Even with all of that performance, the luxury that defines the Flying Spur line isn’t lost on the Speed. The cabin uses Dinamica Pure—a suede-like material—for most interior touchpoints. Dinamica Pure is different from standard Dinamica used by Bentley, as it’s made of 73 percent recycled polyester. The standard version uses new polyester over recycled materials.

Buyers also can choose from 15 color options on the leather surfaces and four veneer options, from the standard Piano Black to no-cost Crown Cut Walnut, Dark Stained Burr Walnut, or Dark Fiddleback Eucalyptus. To remind you that you’re not driving a standard Flying Spur, the Speed comes with a set of sports pedals, “Speed” badges and emblems, and illuminated “Speed” inner and outer treadplates. The driver is also greeted with new performance infotainment graphics that look similar to luxury watches. The seating in the Flying Spur Speed comes with the comfort specification standard for front and rear passenger seats with 24 way adjustment for the fronts and 14 way in the rear. All seats also have heating, cooling, massage, and two memory positions.

While Bentley provided images of the European model, there will be 2023 Flying Spur Speeds sold in the U.S. The configurator is live on Bentley’s site, but official pricing has yet to be announced. You should probably anticipate bringing a large sum of cash for one of the final vehicles equipped with the Bentley W-12, though.