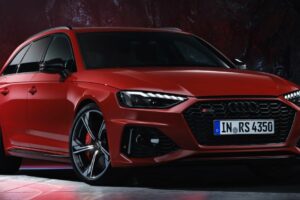 It appears that Audi is planning to widen the A4 range with the next-generation B10 model. Set to go on sale starting 2023, the BMW 3 Series and Mercedes C-Class rival will reportedly be crowned by a petrol-powered RS model, as well as a fully electric RS e-tron variant, Autocar reports. The move is part of the automaker’s plans to introduce 20 new fully electric cars by 2025.

Now, the combustion-engined RS4 will continue to be powered by the existing 2.9 litre V6 engine, but outputs will be boosted via electrification to go above its current 450 hp, 600 Nm mark. Since Audi will no longer develop new petrol and diesel engines, it will modify its existing range of engines to meet Euro 7 emissions standards, meaning regular A4 models (MLB-based) will still be offered with familiar combustion engines, albeit electrified.

In terms of transmission offerings, the A4 range will no longer be offered with a manual transmission, a decision seemingly made to reduce parts complexity. Instead, a seven-speed dual-clutch or eight-speed torque converter automatic will be offered, delivering maximum efficiency and the lowest possible emissions.

Audi R&D head Markus Hoffmann said: “We already have electrification modules today, from mild hybrids to plug-in hybrids – and we will be focusing even more intensively on electrification in the cars that follow.” The PHEV A4 could get a larger 14.4 kWh battery that offers up to 72 km of range, but it’s still shy of the new W206 C-Class PHEV’s 25.4 kWh battery with 100 km range. Sold alongside them is the A4 e-tron model, said to be based on the Premium Platform Electric (PPE) architecture (co-developed with Porsche). Styling will be broadly similar between the two, but as per usual e-tron affair, it will get a blanked out grille and other zero emissions-specific design traits.

Base models will get a single motor RWD setup, while more powerful quattro variants will get two motors. Crowning the fully electric A4 range is the RS e-tron model from Audi Sport, with reports saying it will pack up to 476 hp and 800 Nm of torque. By comparison, the top RS e-tron GT makes 598 PS (440 kW) and 830 Nm, or 646 PS on overboost.

For footprint, the new A4 is said to be slightly larger and will arrive in the same sedan and wagon body styles. A range of new digital and connectivity features are said to be included as well, such as the NFC-enabled function that’s jointly developed by Audi and Huawei. This allows contactless payment for refuelling, charging, tolls, parking, drive-through dining or other services, all via the MyAudi app.