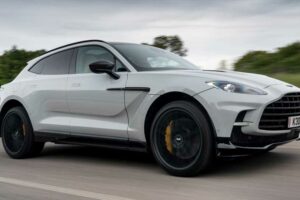 The 2023 Aston Martin DBX707 represents “a new level for the brand.” So said Andrew Tokley, senior manager of vehicle engineering, the morning journalists gathered in advance of being turned loose upon the unsuspecting denizens of Sardinia, Italy, in the storied brand’s new 697-hp SUV. We were crammed around two video monitors as Andrew and Aston CEO Tobias Moers explained what it took to transform the “regular” 550-hp DBX into the veritable monster that some of us had traveled more than 24 hours to drive. But thoughts drifted back to the previous evening’s dinner at the fantastic Hotel Cala di Volpe, where I happened to be seated across from Tokley, who introduced himself as Andy. I asked Andy how much of the DBX707 can be traced to the fact that Moers is now running the Aston show. Andy smiled and nodded.

“We protected the platform from the beginning for a high-horsepower offering,” he said. “But Tobias got us to turn it from nine up to eleven.” That quote alone was worth a seven-hour layover in Rome. To tie it back to Andy’s opening statement, the DBX707 represents what Aston Martin now stands for: beautiful machines with ultra-luxurious innards that offer “class-leading performance.” That last quote is from the man himself, AMG’s ex-CEO Moers, who was brought into the Aston fold by billionaire owner Lawrence Stroll to—once again—save the company from the ever-looming maw of bankruptcy. Before Moers’ arrival, it was hard to explicitly state what Aston precisely stood for beyond pretty cars. Cynics could and will argue that Stroll bought the storied British brand simply so his son could go F1 racing, but Moers is taking the opportunity and riding the gift horse straight down the throats of the competition. He’s doing the one thing he knows how to do in this business: make mean machines that beat up all comers.

To wit, the DBX707. You can tell a lot about a vehicle by learning what vehicles were chosen by the development team as benchmarks. When I first drove the Lamborghini Urus prototype, that company’s then vice president of R&D Maurizio Reggiani asked me what my favorite high-powered SUV was. At the time I thought the best of the breed was the second-generation BMW X6 M. He smiled and widened his eyes. “That’s what we thought, too.” He then let me drive an X6 M around the Nardo handling circuit to see all the ways Lambo had bested M’s ridiculous and ridiculously talented product. And bested it Lambo had. Similarly, Aston benchmarked the Urus, as well as the physics-defying Porsche Cayenne Turbo GT. The latter much more so, as Aston felt the Porsche had superior handling dynamics, though the Urus provided the yardstick in terms of acceleration.

The Aston’s thrust comes courtesy of the most powerful version ever of the AMG-sourced M177 4.0-liter twin-turbo V-8, which pumps out 697 horsepower at 6,000 rpm and 664 lb-ft of torque at a fairly low 2,600 rpm. Yeah, the SUV is called the 707 because it makes 707 metric horsepower, or PS, which is 697 ponies to you and me. The fascinating part is that the DBX707’s iteration of the M177 makes more power than any AMG version. Yes, the power-mad GT Black Series engine cranks out 720 hp, but that’s the M178, a dry-sumped, flat-plane variant.

Remember that when the regular DBX launched, it made “just” 550 hp, and yet the same engine in the less expensive GLE63 spun out 602, never mind the GT63’s 627. How did Moers get Mercedes-AMG to agree to let the most potent M177 live inside an Aston Martin? No clue. The result is that the DBX707 now produces more power than anything in its class, beating the 641-hp Urus and possibly even the as-yet-undetailed refreshed Urus, which is likely to include an Evo version with about 680 hp. Moers’ secret weapon is a man named Ralph Illenberger, who worked with Moers for 16 of the latter’s 26 years at AMG. Illenberger is now the head of powertrains at Aston Martin. “Ralph knows how to get the most from this engine,” Moers said with a twinkle in his eye.

While not always true, I tend to feel the best-driving vehicles have a personality attached to them. What would a Porsche GT product be without Andy Preuninger’s guiding hand? Or a Lamborghini not infused with Reggiani’s room-illuminating smile? We’re getting ready to ask this very question of Mercedes-AMG, as the GT Black Series is the last car Moers signed off on. As for Aston Martin, if the DBX707 is any indicator, I can tell you what the not-so-distant future looks like, but let’s have one more Moers anecdote first, to set the scene.

I was standing next to him during the design phase of the presentation, as our group had walked outside to have Sam Holgate, Aston’s chief SUV designer, show us all the body changes the DBX707 treatment necessitated (the grille is 27 percent larger, the biggest front opening ever fit to an Aston). When Sam got to the rear and began pointing out the rather extreme-looking carbon-fiber rear diffuser—it looks like something off a TVR from 20 years ago—a subset of journalists began pointing out that it would be impossible to tow with this supposed SUV. Moers turned to me, his eyes wide with annoyance. I said, “Canadians.” As a reply, he said, “Just drive the f*cking car!”

And we did. Aston prepared a wonderful, six-hour route that took advantage of Sardina’s fantastic roads. Glass-smooth and ever changing, the hundreds of miles showed us everything the DBX707 has to offer a driver. Even though the SUV we drove was on laughably large 23-inch Pirelli P Zero meats (285/35 front, 315/30 rear), the ride quality was quite lovely. Tokley told us that due to all the suspension changes, Aston felt the ride quality had been improved over the base DBX. Obviously, I didn’t believe him. Six hours later, I did. The front suspension has been stiffened, but the rear has been softened, and I can report the DBX707 rides rather well. Full luxury? No. It maintains a sporty, “up on its knuckles” athletic vibe, but it certainly doesn’t beat you up. What a world.

Now for the exciting part. Damn, can this thing boogie. Just knowing the numbers, I suspected acceleration would be elemental. You can’t point to a single thing—it’s not just the shortened, carbon-fiber, single-piece driveshaft; or the tweaked transmission on which Illenberger undoubtedly worked his tradecraft, too; or the mighty twin-turbo V-8—but this combination is cracking, as the Brits say. Not just from a dead stop, either, though the dead-simple launch control (have Sport or Sport Plus mode active, put a foot on brake, put the other foot on throttle, release brake, and go!) does impress. Indeed, the raw, furious power awes and astounds in every situation. Aston’s 0-60-mph claim of 3.1 seconds is probably conservative—we know an Urus can hit 60 mph in 3.0 seconds—and I’m sure the 193-mph top-speed claim is at least close to accurate, though I only saw 140. Ferocious is the best way to describe all aspects of how the DBX707’s accumulates speed.

Then there’s the handling. I really love the Lamborghini Urus. I did 10 laps around WeatherTech Raceway Laguna Seca last year in a Verde Manits (obnoxious green) example, and I giggled like a fool the entire time. It’s silly, stupid fun in SUV form. I haven’t had as much seat time in the arguably better to drive Porsche Cayenne GT Turbo, but I remember thinking, man, this Porsche isn’t like other SUVs after driving one. It may be even better than the Urus. Well, friends, I think Aston Martin has beaten them both at the physics-defying super-SUV game. All three of these brutes, and really any sporty SUV, can be made to turn in quickly. The trick is when you get down to the apex of a corner and the braking is done and it’s time to roll back on the power, every single fine-handling SUV plows a little bit. There’s just a bit of push, a touch of understeer, a moment to let you know, “Hey, jerky, you’re rocking an SUV. Calm down.” Even in that impressive Porsche, after a few laps or a few minutes of hard driving, the tires get greasy and the front end succumbs to reality. It’s nothing to be harsh about, but it always happens; we’re talking about 5,000-pound SUVs. Magic isn’t real, you know.

Except that maybe with the DBX707, it is. There’s no sensation you’re piloting a big SUV other than being seated higher off the ground than you ought to be. When you stop and think about what you’re experiencing, it’s spooky. When you don’t stop and think—and some of us have made a pretty decent career out of doing just that—this Aston is a ballistic pleasure to drive. And I mean drive hard. Left-foot trail-braking into and through corners, holding the power until redline, shifting in manual, rinsing, repeating. Never, not for a moment, did the DBX707’s front end falter.

Aston claims one of the ways its team was able to improve things so much was to force the rear tires to do more during cornering. One way was increasing the rear track by 16 mm (0.63 inch). Then there’s the front end itself, where everything from the steering box to the bushings to the sheer plate has been hardened. The damper valving has been reworked all around, as has the Active Roll Control, which lets the DBX707 yaw more around corners. Finally, the Aston’s claimed weight distribution is 52/48 front to rear (the regular DBX is 53/47 on our scales), whereas the mechanically similar Urus and Cayenne GT are both 58/42. (The third of the VW Group’s big-time SUVs, the Bentley Bentayga Speed, basically splits the difference at 56/44.) Moers pointed out that those imbalances are the drawbacks of platform-sharing. As far as the Aston goes, the results of all this engineering, if not outright wizardry, is certainly some sort of alchemy.

At dinner that evening, I was seated next to Moers. Not one for small talk, he promptly pressed me for driving impressions. I told him everything I said above but added that I wasn’t a fan of the way the brakes engaged. They worked fine, I explained, and had the appropriate amount of stopping power. I just wasn’t a fan of how deep you had to go into the pedal to get the huge, 16.5-inch front and 15.4-inch rear carbon-fiber binders to bite. I braced myself for some form of argument or admonishment and was surprised when Moers said he agrees with me about the brakes. It’s the brake booster, and the day before he’d been testing out a DBX707 with the stiffer brake booster from the regular DBX fitted. This made the pedal firm enough, and by the time the 707 is on sale  this summer, this will be fixed. Phew! I mean, exactly right. Carry on.

Can I definitively say the new Aston Martin DBX707 is the grand poobah of the super-SUV segment? No. One thing I’ve learned over the years is that until you get all the players together and drive them back to back on the same roads on the same day, you’re talking in generalities, not specifics. I’m a touch, a skosh, a farthing more than halfway positive that Aston’s done the near impossible and beaten the best in industry (the Volkswagen Group) at their own steroidal SUV game. Our man in Greenwich, Angus MacKenzie, agrees with me. With a future comparison test comes certainty. Until then, know that Aston Martin thinks the DBX707 will account for 70 percent of all DBX sales, which, considering a starting price of $239,086, displays confidence in its own product. More important for fans of the brand, this new chapter in the book of Aston is a good one. Imagine this powertrain in a non-SUV. Something with two doors and that blustery engine behind the driver’s head. Maybe call it the Vanquish? I can’t wait.