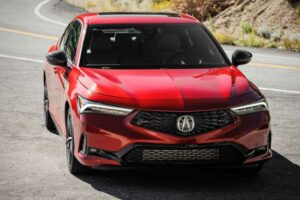 The nostalgia-infused Integra will apparently go down in history as Acura’s gasoline-fueled epilogue as everything after it won’t have a combustion engine. Automotive News is reporting that the rebirth of an icon serves as the ICE’s swan song for Honda’s premium division. Emile Korkor, assistant vice president of Acura national sales, believes buyers of the Civic-based liftback will “be ready for the next generation, whatever iteration it might take.”

He went on to mention the 2023 Integra will help Acura consolidate its loyal customer base prior to embracing electrification. The plan is to skip hybrids altogether and focus solely on battery-powered EVs, the first of which will be an SUV related to the 2024 Honda Prologue. The duo will utilize General Motors’ Ultium bespoke platform, with plans for both to be allegedly built by GM.

In the meantime, Korkor told AN that the ILX replacement has been well-received by fans and Acura believes most of the production will be represented by the high-end A-Spec with Technology Package. It costs just under $37,000 or about $5,000 more than the base trim level. The new arrival represents a change in strategy as the bulk of the sales for previous models was represented by the lesser configurations whereas the Integra is expected to generate most of the volume in the more expensive specifications.

Knowing enthusiasts would go for the six-speed manual gearbox, Acura decided to install a clutch pedal only in the top-end trim without making the car too expensive. Since it rides on the same platform as the Civic, the company was able to spread the development costs and keep the Integra attainable even in fully loaded guise. The fact it’s also built in the US rather than being imported has also helped keep pricing in check.

Emile Korkor added that “positioning the Integra is really an important thing, as a true gateway to the brand, and a worthy successor of the original Integra.” Production at Honda’s Marysville Auto Plant commenced at the beginning of the month and Acura dealers will have cars up on display from early June.