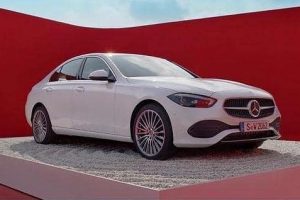 So this is it, folks – the 2022 W206 Mercedes-Benz C-Class before we’re supposed to see it. These images, posted on The Automobilist Facebook page, give us the clearest view yet of the all-new C-Class inside and out, ahead of the planned official reveal event on February 23.

There’s nothing surprising here, of course, with plenty of revealing spyshots and teaser images already available. This particular unit looks to wear the Avantgarde trim, different to the AMG Line in the official teaser images. The front grille here goes without the rather garish three-pointed star chrome pins on the sportier model.

As is tradition at this point, the W206 C-Class apes the latest W223 S-Class in looks. From the slim headlamps to the sharp taillights, the C-Class carries the same mini S-Class styling but on a more compact, sportier package. It’s a strategy that has worked for a few successive generations now, so I guess there’s no reason to change it.

It’s the same story inside, with the W206 having a largely similar layout as the flagship limo. The air-con vents, however, are more rounded rather than rectangular here – a nice continuation of the excellent W205 cabin design. Personally, I’m not quite convinced by the large centre touchscreen in terms of its general ease of use, but I’ve also been proven wrong many times before.

Overall, I do think that the W206 looks a little underwhelming so far. It doesn’t quite have the same wow effect as the groundbreaking W205 back in 2013 for me, and no, I’m not just saying it just because I’ve owned both a W205 and a C205 Coupe. Seriously, there’s not even a hint of jealousy here. None whatsoever!

We’ll see and know more in two days, so do check back here soon. For now, what do you think of these leaked images – does the W206 look like a G20 BMW 3 Series-killer? Do comment below, as I head down to my (now old) C-Class and cry.