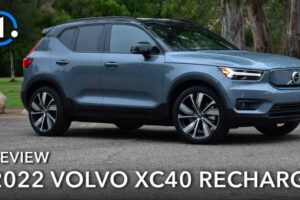 If someone asked you which Volvo model had the most torque, you’d probably assume it would be the sporty V60 Polestar or the flagship XC90, right? That’s what I would’ve thought, and I’d be wrong. The torquiest vehicle wearing the Iron Mark is actually one of the smallest – the fully electric 2022 Volvo XC40 Recharge, which ties its coupified C40 Recharge sibling with 486 pound-feet courtesy of an electric motor on each axle.

While EVs based on existing internal-combustion platforms are inherently compromised – and an unimpressive 223 miles of EPA-rated range reflects that – the Volvo XC40 Recharge is nonetheless a lovable offering. Although it competes with the Ford Mustang Mach-E and mechanically similar Polestar 2, the XC40 Recharge is perhaps most impressive weighed against its gasoline-powered sibling. With tons of added power and a low center of gravity courtesy of its 75.0-kilowatt-hour lithium-ion battery pack, the electrified XC40 keeps the gasser’s nippy personality while adding some genuine performance.

Zero tailpipe emissions are an added bonus to all that performance. And with the same clever interior features and storage cubbies as the standard XC40, the Recharge feels appropriately “Volvo,” giving the compact crossover EV space a little offbeat, Nordic variety.

A vehicle’s ratings are relative only to its own segment and not the new-vehicle market as a whole. For more on how Motor1.com rates cars, click here.

In contrast to the similarly styled Volvo XC60 and XC90, the XC40 family has always marched to the beat of its own design drum. Common to both the Recharge and its ICE equivalent is a clamshell hood, wheels-at-the-corners stance, upkicked side glass, and wraparound taillights that give the XC40 plenty of personality. The Recharge differentiates itself only slightly; there’s a body-color grille panel, and a gloss-black rear diffuser replaces the gasser’s tailpipes and silver bumper trim.

The XC40 looks sleek in my tester’s Thunder Grey Metallic color, a $695 option, but the youthful bodywork demands a bit more flair – the equally priced Sage Green or Fusion Red perhaps? Adding to the Recharge’s interesting design is a standard black roof, and all Ultimate trims like the one I drove get stylish 20-inch wheels, with 19s appearing on the base Core and mid-level Plus.

Inside, the XC40 Ultimate gets an attractive combination of microfiber and leatherette seat upholstery. The suedelike material on the seat centers is partially made from recycled PET plastic, while the “Microtech” synthetic leather on the bolsters feels premium and supple. A vegan interior this is not, as leather still appears on the steering wheel. But as with the gas-powered XC40, the Recharge feels premium and posh, with nice materials throughout. The carpeted door pockets are an especially nice touch, replacing what would likely be a slab of hard, scratchy plastic otherwise.

Unfortunately, that carpet is only available in black, unlike the gas XC40’s optional orange or the related C40’s optional Fjord Blue. The only bright spot, figuratively and literally, is the dashboard’s aluminum-look trim, whose geometric inlays are backlit to coordinate with the ambient lighting. Otherwise, the XC40 Recharge is a bit monotonous and funereal inside, but a smart design and good materials soften the blow.

Based on Volvo’s Compact Modular Architecture (CMA), the XC40 Recharge has a stiff structure and a well-damped ride to go along with its high-quality interior. The automaker produces some of the most comfortable seats in the industry as well, and the front row provides plenty of support and a healthy level of cush for long-distance driving. Ditto the rears, which benefit from the XC40’s upright stance and boxy roofline to offer a comfortable seating position with lots of headroom.

Before you ask, yes, the 2022 Volvo XC40 Recharge does indeed have a frunk. It’s a shallow affair measuring 1.0 cubic foot, but it’s enough space for the on-board charger, tire inflator kit, and perhaps a few odds and ends – your muddy hiking boots will feel right at home. Cleaner, less smelly cargo goes under the rear hatch, which reveals 25.0 cubic feet of cargo space with the seats up or 46.0 cubic feet with the seats down. The XC40 also has clever interior features like a deep armrest cubby with a removable waste bin and an accessory hook for purses or backpacks on the passenger side of the center console.

In terms of the tape, the XC40 comes up short relative to competitors like the Ford Mustang Mach-E, Hyundai Ioniq 5, and Audi E-Tron. Nowhere are the XC40’s shortcomings more evident than in the cargo area. The cabin rarely feels cramped for even adult-size passengers, but space behind the seats might run out for families with strollers and diaper bags and kids’ diversions. Only the Polestar 2 and its sedan/hatchback/crossover form factor do worse than the Volvo.

Like the fastback C40 crossover, the XC40 Recharge gets a new Google Automotive operating system for 2022. Displayed vertically on a 9.0-inch touchscreen, the new software is an improvement over Volvo’s old infotainment suite, with special thanks going to built-in Google Maps. Just as it would on a smartphone, the embedded navigation app provides intelligent traffic routing, and it’s optimized in the Recharge to provide range estimates and charging options for different routes.

Even with the new software, the Volvo’s infotainment isn’t extremely touch-responsive or easy to parse. Adjusting the climate control temperature is a particular nuisance, requiring a tap of the lower corner of the screen and then a brief wait while a temperature slider pops up. But it’s nowhere near the worst in this segment, and minor frustrations subside with familiarity.

The Recharge also boasts a standard 12.0-inch digital instrument cluster that’s extensively reconfigurable, with beautiful graphics that display a full-screen map, driver assistance, electric range and energy consumption, or a mix of the above. It’s a better setup than the minimalist Mach-E’s candy bar–sized instrument cluster or the not-that-customizable Kia or Hyundai’s display.

XC40 Ultimates like the one I drove come standard with a 13-speaker Harman Kardon audio system kicking out 600 watts. An air-cooled subwoofer helps reduce energy consumption, but that doesn’t mean it can’t kick out some pretty bitchin’ noises. The optional Bowers and Wilkins audio found on Volvo’s 60-series and 90-series cars isn’t available on the XC40 Recharge, but I didn’t miss it one bit.

By now, most folks understand that EVs can not only be green, but they can be fast as hell too. Nevertheless, the XC40 Recharge pinned me to my seat far more aggressively than expected. The effortless power and torque is also available at any speed, making genuine fun of quick passes and merging maneuvers. Volvo quotes a sprint to 60 miles per hour in just 4.7 seconds, which is just a few ticks off from the far more aggressive, plug-in hybrid V60 Polestar Engineered. Since it lacks that car’s adjustable Ohlins dampers and Brembo brakes, the XC40 Recharge isn’t nearly as sporty, but the sheer thrust is impressive.

Still, it has a decent amount of poise to go along with its speed, thanks to the battery’s low, central placement under the floor and in the “transmission” tunnel. Weight is up to 4,741 pounds, nearly half a ton more than the gas-powered XC40, but the Recharge’s front axle only carries 52 percent of that, compared to 58 percent on the T5 AWD. That means a manageable amount of understeer in spite of the weight gain, and balancing the Recharge in corners is simply a matter of smoothly adjusting the accelerator – lift off to tuck in the nose and apply power to make a hasty corner exit.

Speaking of, Volvo might have the best one-pedal programming in the industry. At freeway speeds, for example, the regenerative brakes slow the vehicle only slightly, mirroring the coasting of a gas-powered car. But at slower speeds, motor-generators provide more resistance to slow the car all the way down to a complete stop. Recuperation increases as speed decreases, making it easy to flow with traffic with none of the herky-jerkiness of lesser one-pedal driving systems, where lifting off the throttle completely results in maximum regen.

To no one’s surprise, the 2022 Volvo XC40 Recharge comes loaded with active and passive safety equipment. Every trim comes standard with full-speed automatic emergency braking with pedestrian detection, lane-departure prevention, and blind spot monitoring. The Ultimate trim adds adaptive cruise control and hands-on Pilot Assist, which manages speed and lane positioning to keep the XC40 centered and well-spaced from traffic. It works well and unobtrusively enough to encourage the driver to keep all the systems active.

Although it hasn’t been officially rated by the federal government, its gas-powered sibling earned a five-star overall score. And the IIHS calls the XC40 Recharge a Top Safety Pick+ thanks to solid crashworthiness in all the agency’s tests, an advanced active safety suite that avoids rear-end collisions and prevents pedestrian injuries, and good-rated headlights.

A few years ago, any EV that exceeded 200 miles of range warranted some praise, but nowadays, the Volvo XC40 Recharge’s 223-mile EPA range estimate is near the back of the class. A 150-kW charge rate at a DC fast charger is adequate, jolting a dead battery to 80 percent charge in 40 minutes. A 0-100 percent charge on a 240-volt outlet takes eight hours, perfect for folks with charging facilities at home or work.

But there’s no denying that many of the XC40 Recharge’s cheaper alternatives do better, as seen in the table below. Or spend a bit more cash on the more spacious Tesla Model Y and get 303 miles and access to the automaker’s widespread Supercharger network.

With a base price of $52,795, the XC40 Recharge exists in a tweener space – more expensive than the non-luxury Mustang Mach-E and Ioniq 5 but cheaper than the upmarket Audi E-Tron. Stepping into the Ultimate trim level demands $59,245, adding premium audio, Pilot Assist, heated rear seats, a surround-view camera, and a heat pump that improves range in colder temperatures.

A loaded Mustang Mach-E with all-wheel drive and the extended-range battery is cheaper at $55,745 (if you can find one, as 2022 order banks are now full). The Hyundai Ioniq 5, whose flagship Limited AWD trim costs $56,245, is also a bit less expensive, even fully loaded.

The XC40 thus becomes a lifestyle decision, rather than a logical one. Its modern, spare interior design and polished driving dynamics help make up for middling range and a smallish cargo area, and I enjoyed turning around to look at the Recharge every time I parked it. It may be flawed in some ways, but there’s no denying the charm of a handsome Swede with plenty of muscle.

Is the Volvo XC40 Recharge electric?

Is the Volvo XC40 Recharge efficient?

The Volvo XC40 Recharge can travel 223 miles per charge. The XC40 Recharge does its best to help with an excellent one-pedal driving mode that’s very easy to get accustomed to, allowing drivers to recuperate energy that would be wasted on braking.

How fast is the Volvo XC40 Recharge?

Thanks to two electric motors (one on each axle), the Volvo XC40 Recharge can accelerate to 60 miles per hour in an estimated 4.7 seconds. It feels very fast, thanks to its instantaneous torque delivery, and it is a lot of fun to drive.

How long does it take to recharge the all-electric Volvo XC40?

Using a 240-volt household wallbox, the Volvo XC40 Recharge takes eight hours to fully replenish an empty battery. At a DC fast charger, the XC40 will recharge from 10 to 80 percent in about 40 minutes.