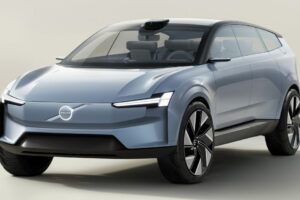 Say hello to the new corporate face of Volvo’s upcoming electric car range. The Volvo Concept Recharge was just announced at the automaker’s first ever Tech Moment conference, which touched on several key technologies and features that it plans to implement on its cars in the next few years.

First and foremost, the Concept Recharge is the new flagship model that is set to be introduced next year. The SUV, as the company calls it, will be based on a completely new platform, the details of which have yet to be released. It won’t be known as the XC90 or XC100, because Volvo will be adopting an entirely new naming convention moving forward. It’s a new era, it says.

The photos may deceive you at first, but the SUV is substantial. By removing the engine and replacing it with a full battery pack under the flat floor, Volvo managed to stretch the wheelbase, lower the roofline, and reduce the height of the bonnet as well. The A-pillars are more steeply raked, all of which work in tandem to create a smooth surface for air to glide over. Other compelling design traits include the shorter front and rear overhangs, the near vertical rump, the massive wheels with aero covers, and of course the hallmark “Thor’s Hammer” full LED headlights. These are now much slimmer, and there’s a clever trick that splits the DRLs to reveal the main lighting elements that are made from Volvo’s latest high-definition tech. The front grille is completely closed off, and in its place is a clean, backlit Iron Mark logo.

In continuing its “less but better” approach, the Concept Recharge’s vertical tail lights are slimmer than they have ever been. There is also a set of wings that extend at higher cruising speeds to further improve overall aerodynamics.

The cabin design is also all new, with the cockpit deliberately designed so as to not distract the driver with a bombardment of information. That explains the slim digital instrument display. Only vital information such as driving speed, GPS navigation and charge levels are shown – the rest are taken out but can be optionally displayed on the floating head up display. Again, less but better.

In the middle rests a gigantic 15-inch touchscreen display, which rests vertically on the floating centre stack. It will be powered by Android Automotive OS with Google Assistant, Google Maps and Google Play built-in. The operating system will be skinned with the brand new VolvoCars.OS, featuring a simplified user interface that is more intuitive to use than before. A dedicated smartphone app will make this experience more unified and seamless, too.

If you can’t tell by now, the cabin is Volvo’s latest Scandinavian design interpretation. There’s a lot of natural materials used throughout the cabin, with clever use of diffused LED mood lighting under the dash and door trims. The flat floor helps create more space for all occupants, and like current Volvo SUVs, the rear passenger seats are positioned higher than the front seats for better outward visibility.

Volvo Cars design head Robin Page said: “Inside the Concept Recharge, we create a truly Scandinavian living room feeling. The interior integrates our latest user experience technology with beautiful, sustainable and natural materials. Each part of the interior is like a piece of art and could stand alone as individual furniture in a room. We use the latest technologies but not for their own sake. We always focus on the benefits that technologies can bring.” As previously reported, the new flagship model will get LiDAR sensor as standard throughout the range. This highly precise imaging system developed by Luminar works exponentially faster than the typical stereo camera system, which Volvo believes will help save even more lives. This is an industry first, and the LiDAR system costs US$1,000 apiece.

This, combined with Nvidia Drive Orin system-on-a-chip, will enable a higher level of automation (Highway Pilot). In fact, the self-driving system can be continuously updated over-the-air, so it will only get better over time. It’s supposedly safe from cyber attacks as well, so you won’t have to worry about your self-driving vehicle being hijacked by some random hacker. However, Highway Pilot can only be used where legally permitted, and Volvo says it takes full responsibility for any mishaps that happen during unsupervised driving.

So, what do you think? Are you excited for the new era of Volvo Cars? There’s a lot to unpack, so watch this space for more updates!