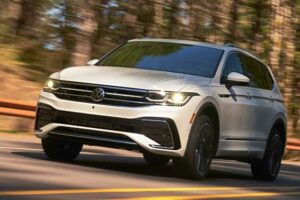 The customer is always right, right? Right, says Volkswagen. The refreshed-for-2022 VW Tiguan is proof-positive someone’s taking notes at its hosted focus groups, as much of what is either new or now standard in VeeDub’s hottish-selling compact crossover ostensibly comes straight from the complementary-coffee’d mouths of market research participants.

That’s some rather old-world thinking in an industry beset by startup culture and forced innovation. See, if you listen to enough Silicon Valley VC types present at tech summits and trade conferences, you’ll catch occasional repackaged snippets of Steve Jobs’ infamous quote pertaining to what the customer knows—or doesn’t know—when it comes to designing desirable products. If the feedback on your upcoming project is too scattered and/or too predictable, just make it up as you go and label it as innovation. Stick the drive mode selector on the center touchscreen! Replace the steering wheel with a yoke! Be an agent of chaos!

Or keep it simple and listen to customer feedback on what they actually want, even if the data you scrape is occasionally contradictory. Research told VW that even those sliding in the base Tiguan S would like toasty buns, so heated seats are now standard across the range. Ditto a digital gauge cluster and LED headlights, each of which are now plopped in a Tiguan of every style. Nice.

If we were in VW’s market position, we’d take the safe and reliable route, too. Even for such an established name, Volkswagen still has ground to cover in every segment it occupies. At least on the hypercompetitive compact crossover front, things are good. As it happens, the Tiguan is its best-selling nameplate both on the domestic and global scale, shifting 300,000 units since 2018 when VW shoved a fistful of Vehicular Growth Hormones down the Tiguan’s fuel fill neck and bumped it up a segment in size for its second generation. The Tiguan’s growth spurt from the Euro-sized first-gen subcompact crossover to the current “LWB” second-gen paid immediate dividends; sales waxed from 46,983 in 2017 to a winning 103,022 in 2018 with the new generation, a sales pace that continues even in 2021. See? The customer is always…something or other.

Some of what made it through to production isn’t good, though. Specifically, it seems the average driver does not share our distaste for touch controls, a point made clear by the Tiguan’s conspicuous inclusion of optional capacitive controls for climate functions. As we experienced both in the fresh Tiguan and the new GTI, operating these touch-capacitive interfaces bounces between fine and “oh my god, please just do what I want,” but we’re not ones to stand in the way of personal taste.

That’s it for new gripes, really. The rest of the Tiguan is either slightly new or unchanged, with the most significant visual changes landing on the exterior. Minor tweaks to the front fascia give it a modestly more aggressive face—think the difference between a two-month-old kitten to a three-month-old kitten—while new wheel designs and two new colors give buyers a dollop of extra personalization. Also of note is the redesigned VW badge up front and back, complemented by the “Tiguan” script now centered on the rear decklid à la Atlas, GTI, and Taos.

So, aside from winking at both curious and returning customers, 2022 brings the Tiguan visually in step with the rest of the VeeDub lineup, at least in the States. The cabin is requisitely futzed with as well; you’ll recognize the steering wheel from baby bro Taos, sitting pretty alongside the aforementioned 8.0-inch digital gauge cluster that’s the go-to in all models save the SEL R-Line, which dazzles—or dizzies—drivers with a bigger, 10.3-inch unit.

If those new standard heated seats have you approaching the boiling point, you’ll have to dish out for the range-topping SEL R-Line for its exclusive ventilated seats to keep that rump frosty. Unless you skimp and stick with the base Tiguan S, all trims arrive with Apple CarPlay and Android Auto, so you’ll have plenty of media and app integration to take your attention away from those goofy capacitive buttons. Not enough newness for you? Well, a new brown leatherette color is available on top trims. (Ask for your seats in Noisette; tell ’em MotorTrend sent you, they’ll know the drill.)

Mechanically, it’s the same 2.0-liter EA888 turbo four-cylinder song-and-hustle we’ve prodded in the prior Tiguan. The eight-speed automatic transmission also continues to handle gear swaps, and the optional 4Motion all-wheel-drive system is here, too. Interestingly, the three-row Tiguan is no longer available with 4Motion, VW reps citing a low take rate for that combination.

We put the 2022 VW Tiguan’s new clothes to the test on the sunny and Botox’d roads that slither through Malibu, California. Hosting a drive event of a mass market, non-performance car in Malibu sends one of two distinct messages; either you’re confident the car or SUV in question can handle the vast network of tight roads that crisscross the Santa Monica Mountains, or you’re absolutely sure the invited parties will stick to your medium-well drive route that routes you onto some of the milder streets.

We did a little of column A and column B. Remember, this is mechanically identical to the outgoing Tiguan, so these drive impressions are less about what’s new, and more a memory refresh on what we do and don’t like on VW’s big seller. On the straight and wide highway-ish portions, it’s quiet, comfortable, and as easy to commute in as any other crossover of this ilk. Don’t expect any mind-sublimating revelations in this situation on your first test drive, but the exact same can be said of every single compact crossover on the market.

Staffers here at MT are split on the Tiguan’s iteration of the ubiquitous VW 2.0T; prior drives and tests of the compact crossover concluded the powertrain clunky and sluggish, returning an 8.6-second 0-60 mph stroll and a middling 45-65 mph passing time. This writer found the updated Tiguan’s same 184 horsepower and 221 lb-ft more than enough for school shuttles, coffee cruises, and dinner dashes. The eight-speed auto fades into the background—as it should—and when smacked with a huge stick, fires off respectably quick manual shifts when trying to hustle.

We’re more conjoined when the subject turns to the suspension and handling. Not that Tiguan customers are remotely concerned with how their new workaday three-row rips through the canyons, but hey—it does. Even when driven like a total moron, handling and grip is beyond adequate for its intended purpose. We’re not going to go into the particulars of exactly how it carries itself through the more Miata-minded corners, because let’s be honest, who really cares—but this innate sure-footedness translates to confidence during some of the more tricky maneuvers you may potentially encounter on a day-to-day basis. Think emergency lane changes, quick brake stops, and making an almost-missed turn, all handled with less of a cortisol spike.

When you’re not acting the fool—as we did, and do often—it’s a nice day-to-day conveyance. However, while we’re glad to see the digital gauge is now standard on all trims, the updated interface is more restrictive than the older design, and looking too closely at the screen’s resolution reveals it’s lower than the latest and greatest units in other cars.

Also, while some trims provide second-row passengers with access to a set of USB-C ports for device care and feeding, the unfortunate souls crammed into the optional third row won’t have time to appreciate the small cupholders provided; they’ll be too focused on their cramped muscles due to the contortions required for average-size people to fit.

Modern Volkswagens have never occupied the bottom portion of the pricing bracket, but the updated Tiguan appears nicely equipped for the price. We split our time between the $29,495 front-wheel-drive SE and an all-wheel-drive $30,995 SE, and we felt no appreciable need for a buyer to jump to the SEL aside from the lack of navigation on the front-wheel-drive model.

So, if you’re one of the participants who sucked down free granola bars and coffee at one of Volkswagen’s many market research clinics, you’d better put your money where your mouth is—the 2022 Volkswagen Tiguan hits dealers by the end of this year. Enjoy your standard heated seats.