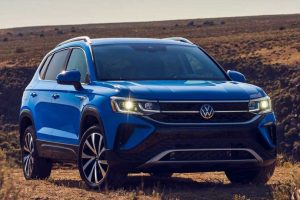 More space and a slight increase in size should keep new customers happy.

While we mourn the loss of the Volkswagen Golf, the German manufacturer is surging on with a don’t-call-it-a-replacement replacement: the 2022 Volkswagen Taos. VW would rather we don’t think of the Taos as the Golf’s successor, but even the automaker’s reps say “there will be a lot of overlap in the use case.”

Can this overlap retain disaffected Golf shoppers? That seems likely, although more importantly the Taos expands the reach of VW’s crossover lineup. At the moment, the company’s entry level high-rider, the Tiguan, starts at nearly $25,000. The smaller Taos should drive that number down, perhaps below the last Golf’s $23,195 price. This crossover should be a win for consumers, even if it lacks the compact-hatchback charm of the Golf.

Taos Interior And Exterior Dimensions Are A Win

The MQB-based Taos’ size feels just right for consumers. It splits the difference between the outgoing 167.6-inch Golf hatchback and the popular, 185.1-inch Tiguan, at 175.8 inches in length and riding atop a 105.9-in wheelbase. What does that mess of numbers mean? The Taos is bigger than the Golf, but should be nearly as easy to place on the road as your average compact – it’s 9.3 inches shorter than VW’s compact Jetta, after all.

The design, both inside and out, is familiar. VW scaled down the look of the Tiguan and melded in some of the flair of the not-for-North America T-Roc. The light-up strip that connects the headlights with the badge in the grille is bold, and the details of the headlights feature shades of Arteon. A cute side grille is Atlas-like, while the profile is clean and unfussy – a more aggressive rake to the D-pillar and a faster rear window would have created visual panache. We guess Volkswagen did it this way to leave the door open for a Cross Sport trim.

The cabin is less modern than the redesigned Golf or the incoming GTI, but the digital instrument cluster and 8.0-inch touchscreen make for a clean aesthetic. We have questions about material quality, considering both our experience with US-market VWs and the expansive section of shiny plastic trim on the dash, although the seat upholstery looks neat and premium. Judging by the images, there’s ample second-row legroom, too.

While Volkswagen Senior Vice President of Product Marketing and Strategy Hein Schaffer said, “We believe that the American customer wants a well-equipped car,” the company isn’t giving stuff away.

For example, all the active safety gear, like automatic emergency braking (AEB), is optional. This disappointing decision on VW’s part comes as Nissan, Honda, and Toyota offer active safety free of charge. AEB with pedestrian detection is standard on the base Rogue Sport, for example, while the class-below Toyota C-HR includes the full Toyota Safety Sense suite on every trim.

The Taos won’t include any standard active safety equipment.

The optional IQ.Drive safety suite is comprehensive at least, featuring forward collision warning with automatic emergency braking, blind spot monitoring, lane keeping assist, full-speed adaptive cruise control, and automatic high beams. Provided the Taos undercuts pricier rivals and VW avoids charging an arm and a leg for IQ.Drive, the lack of standard safety equipment may end up as a small shortcoming instead of a glaring one.

Disappointments aside, there’s some exciting gear on this compact CUV. Volkswagen confirmed that its Digital Cockpit system is available on certain trims, replacing the physical instrument cluster dials with a reconfigurable 12.3-inch display. On top of that, the Taos can function as a WiFi hotspot and is available with a wireless charge pad. All but the base model will feature an 8.0-inch touchscreen and the latest MIB3 infotainment software.

Taos Horsepower And Fuel Economy Should Be Balanced

Like the Golf, Tiguan, and Jetta, the Taos relies on a standard turbocharged four-cylinder engine. The new 1.5-liter unit packs 158 horsepower and 184 pound-feet of torque – VW hasn’t revealed the Taos’ weight, but those figures outdo the 141-hp Nissan Rogue Sport. Even with the help of a turbocharger, though, the 1.5-liter four-cylinder can’t hold a candle to the larger engines in the Jeep Compass (175 hp/184 lb-ft) and new Hyundai Tucson (190 hp/182 lb-ft).

The Taos’ turbocharged engine works alongside one of two gearboxes, depending on where the power goes. Front-drive models feature an eight-speed automatic, while the 4Motion all-wheel drive partners with a seven-speed dual-clutch transmission. Fuel economy figures aren’t available yet, although the 1.5-liter’s total output is similar to the Jetta’s turbocharged 1.4-liter – we don’t expect a big change from that model’s EPA fuel economy ratings of 30 miles per gallon city, 40 highway, and 34 combined.

When Can You Buy A Taos?

While Volkswagen is still months away from announcing pricing – we’re expecting prices to start between $21,000 and $23,000, and top out at roughly $30,000 – the automaker confirmed that its newest CUV will arrive in dealerships in the summer of 2021. Expect additional info regarding the cost of ownership in the coming months.