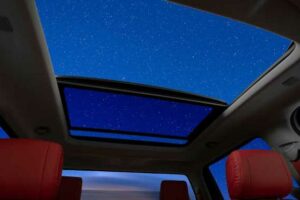 Update 7/13: The first photos of the 2022 Tundra have leaked from a dealer meeting, and after a teaser of the truck’s new face was released, Toyota also has given a glimpse of the interior—including its massive new panoramic sunroof. This story has been updated with that photo above and more below.

Other good news, besides the Tundra’s upgrade from an available moonroof to an available all-glass roof: A brief video clip depicting the panoramic sunroof shows a solid glass rear window. What’s special about that? The current Tundra pickup offers a roll-down rear window, instead of the more common sliding central panel favored by pretty much every other truck on the market. Not only does this retracting glass afford Tundra owners more wind-in-their-hair fun, combined with the big new sunroof in its open position, the disappearing rear window should allow for an almost open-topped feel.

From what we can see with the rest of the cabin, the new Tundra’s interior boasts a large, landscape-orientation display flanked by air vents. The only other detail that stands out is a red stripe stitched into the top of the steering wheel rim, a sporty touch. The original story regarding the front-end styling is below.

The next-gen Toyota Tundra is nearly here, so naturally the slow-drip reveal of its basic appearance and details has begun. Toyota is kicking off the run-up to the new full-size truck’s debut with a full-frontal look at the Tundra’s front end. It’s about time: The current Tundra has been on sale in much the same form since 2008.

Yes, the image (and accompanying video, below) is smokey, and yes, the truck is backlit like it’s testifying against organized crime—if there were any sound attached, we bet it’d have that voice-garbler robotically altering the Toyota’s engine sound. Even so, one thing’s for sure: The 2022 Tundra will have a lot of interesting front-end lighting. As we predicted, based on spy photos and artists’ renderings, the new truck adopts small, L-shaped headlights and what appears to be a huge, gaping grille.

There are lights everywhere, from a trio of Ford-F-150-Raptor-style amber marker lights at the leading edge of the hood to corner markers on the fenders to a pair of slim LED fog lamps down low. There is even a huge LED strip glowing from what appears to be the center of the grille opening. This being a teaser, it’s unknown whether that central lamp is really just backlighting for a “TOYOTA” badge or if it’s an off-road-style light bar.

So far, that’s all we got. If we were bettin’ folks, we’d say the truck pictured here is likely a top-dog Tundra TRD Pro, Toyota’s off-road-focused trim level also found on the smaller Tacoma pickup and the 4Runner SUV. Look for more previews and teasers in the coming weeks.