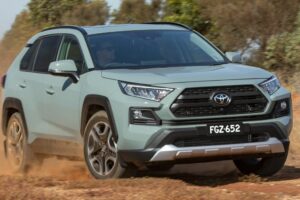 Toyota Australia has announced a small update for the 2022 RAV4, which sees every model in the line-up, including petrol and hybrid models get styling and tech upgrades. Production of these models will begin in December 2021, but expect prices and photos to be revealed soon.

Now, all variants will get upgraded with LED fog lights as standard, while hybrid models will sport a new headlight design that ‘enhances’ nighttime vision. Petrol models, on the other hand, will now ship with the engine start-stop system as standard, and there are also new alloy wheel designs for most variants.

Inside, the RAV4 Cruiser variant gets added with an eight-way adjustable front seats, including a three-stage ventilation function and digital rear view mirror as well. The door switches on the GXL, Cruiser and Edge models will be also illuminated for the first time.

At the top of the line is the RAV4 Edge, which benefits from a safety upgrade with the addition of parking support brake. This goes on top of the existing rear cross-traffic alert system.

A six-speed manual transmission is offered for the base model, but otherwise they all get a CVT. Only the top 2.5 Edge variant gets an eight-speed auto. The hybrid is available solely with the 2.5 litre engine, which produces 218 PS in 2WD models or 222 PS in AWD models.

Toyota Australia vice president sales, marketing and franchise operations, Sean Hanley said: “The RAV4’s mix of style and practicality, and in particular, its hybrid powertrain, really resonates with buyers and these upgrades will add to that appeal.”

“While these updates won’t arrive until early next year, Toyota is committed to keeping its customers aware of upcoming improvements and we encourage our customers to speak with their preferred Toyota Dealer about the upgrade on any oders placed,” he added.