2022 Toyota GR86 makes its official debut in the US – paultan.org 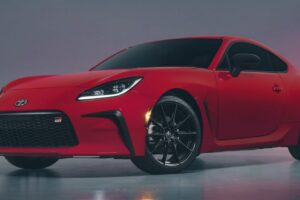 Alongside the Toyota Corolla Cross, the GR 86 has also made its debut in the United States, nearly two months after the successor to the 86/Scion FR-S was revealed in Japan. Set to go on sale later this year, the company has yet to provide official pricing, although we do get a proper spec sheet.

One of the more significant changes is the use of a 2.4 litre naturally-aspirated flat-four petrol engine, which produces a more substantial 231 PS (228 hp) and 249 Nm of torque. The figures represent an increase of 23 PS (23 hp) and 37 Nm from the previous 2.0 litre unit, and are identical to the US-spec Subaru BRZ, but a little less than what Japan gets.

The added grunt of the new engine is certainly a plus point, but more importantly, peak torque now comes in at 3,700 rpm instead of 6,600 rpm, which is certainly more practical in terms of usage. As before, drive goes to the rear wheels and it’ll take 6.1 seconds instead of seven seconds to complete a sprint from 0-96 km/h (0-60 mph).

That time is with a six-speed manual transmission, but with the optional six-speed automatic, it’s 6.6 seconds instead (down from eight seconds). Toyota says both transmissions have been updated to handle the increased torque output and deliver a more enjoyable driving experience. A Torsen limited-slip differential is also standard at the rear, and the sports car retains its front MacPherson struts and double wishbone rear suspension. The GR 86 will come in base and Premium grades, with the latter being equipped with black 18-inch forged alloy wheels and Michelin Pilot Sport 4 tyres. The lesser option makes do with a set of 17-inch units instead, paired with Michelin Primacy HP tyres. Both wheel sets are backed up by brake discs that measure 295 mm at the front and 290 mm at the rear. Design-wise, the GR 86 represents a significant evolution from its predecessor, with highlight cues being the teardrop-shaped headlamps with C-shaped LED DRLs, functional side vents, C-shaped taillights, a ducktail spoiler and slightly revised dimensions. Compared to its close sibling, the BRZ, the GR 86 gets its own “Matrix G Mesh Grille” and bumper design.

Inside, both cars share the same dashboard layout and 2+2 seat configuration, the former sporting a shelf section ahead of the front passenger, piano-key/dial switches and redesigned air vents. Other changes in the cabin include a new centre console design, along with revised door cards and handles.

Seven exterior colour options will be offered to customers, including one named Track bRED, and the asking price will also come with a complimentary one-year membership to the National Auto Sport Association (NASA). Benefits with the membership include one free entry to a High Performance Driving Event (HPDE) and discounted admission to NASA-sanctioned events.