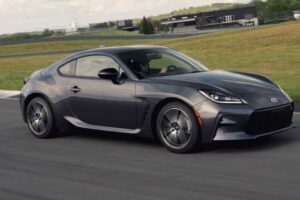 We had one question in mind as we sat strapped into the 2022 Toyota GR 86 and waited for our turn on the track: Did Toyota screw up one of our favorite cars? Once we received the go signal, we revved the engine, let out the clutch, and charged into the first sharp right-hander to find out.

We turned in aggressively and lifted off the accelerator abruptly, and the GR 86 brought its pert little rear end around as neatly and gently as you could want. We caught it with some opposite lock and were away. In that instant, we had our answer: Toyota most definitely did not screw this up.

Welcome to the all-new 2022 Toyota GR 86, successor to the Toyota 86 and Scion FR-S before it. The formula is the same—a moderately powered 2+2 that emphasizes handling over power—but the new GR 86 addresses most of the old car’s faults, both real and perceived, without introducing any new ones. This new GR 86 is everything the old car was and then some, and we think it will attract a new generation of fans without alienating the old ones.

The New GR 86 Is All-New But Instantly Familiar

A lot has changed from old to new—this is, after all, a wheels-up redesign, for which Toyota once again partnered with Subaru, who is launching its own second-generation BRZ sports car. The engine is bigger but still not massive, while the torque curve is meatier but not so much that it overwhelms the tires (or the driver). The styling is neater and more contemporary inside and out, and the ride is better. The back seat is still useless, but the basic character of the car is intact—and that is the most important thing.

For our dive into the details, let’s start with the styling. The new GR 86 loses the gangly adolescent awkwardness of the old car, trading it for a tighter, smoother shape with styling cues that remind us a lot of the 1993-98 A80 Supra (and taillights that remind us of the previous-generation Honda Civic coupe). We think it’s a better-looking car than the outgoing 86—the new model’s additional GR letters stand for Gazoo Racing, Toyota’s in-house tuning outfit—and one that is completely different in the details yet pleasingly familiar in overall shape.

Under that skin, the basic layout is much the same: The suspension is by struts up front, a multilink setup out back. But the wheelbase is slightly longer, the body shell has been braced and stiffened, the suspension mounting points optimized, and the spring and shock rates rethought. The hood is made of aluminum, as in the old car, and now the roof and fenders are, too. Incremental weight losses throughout the car help lower the center of gravity by 0.06 inch (every little bit helps!) even as the 2022 GR 86 is slightly heavier, by 20 to 40 pounds.

The four-cylinder boxer engine has been enlarged from 2.0 to 2.4 liters, and it now delivers 228 hp and 184 lb-ft of torque, up from 205 and 156 in the old manual car. (Automatics used to lose 5 hp and 5 lb-ft, but that deficit has been eliminated.) The difference in the engines—and perhaps the biggest difference overall between the old car and the new one—is how that power is delivered: The torque comes on sooner and stays longer. The six-speed manual has been reworked for better shift action, and the six-speed automatic gets the steering wheel paddle shifters it so badly needed.

Inside, the Toyota GR 86 presents a modernized take on the previous interior layout. Switchgear placement is mostly the same, but the switches themselves look better and up to date. The instrument panel has been replaced by an LCD panel that displays a round tachometer circling a digital speedometer until you select Track mode, which swaps in a horizontal ribbon-style rev counter that is easier to read at a glance.

Not that the tach display matters that much, mind you. We did the bulk of our driving on the track, where Toyota had assembled an array of new and previous-generation cars for us to compare and contrast. So long as you keep the engine between 3,000 rpm and the rev limiter, it really doesn’t matter what gear is selected, as the engine pulls strongly and cleanly, far more so than did the old 2.0-liter. In fact, it behooves GR 86 drivers to pay attention to their shift points: The 2.4 doesn’t race to its redline like a turbocharged engine, and its unhurried demeanor and the fact that it doesn’t trail off at high revs means we were taken by surprise a few times when it suddenly hit the rev limiter.

Although the engine still isn’t powerful enough to melt the tires like butter, its newfound grunt does make power sliding easier—just select Track mode to turn off traction control and loosen the reins on stability control, shift to a lower gear, give the steering wheel a good flick, and bury the throttle. It’s tough to spin the GR 86, and even outside of Track mode, the stability control system allows a surprising amount of oversteer before stepping in to help you correct, which is a refreshing surprise from a Toyota.

We were pleased with the addition of paddle shifters for the automatic GR 86 but dissatisfied with their implementation. The shift logic is way too conservative, and it seemed like every time we called for a downshift, we instead got a beep telling us the shift was denied until the engine had dropped off its torque  plateau. The only way to keep the revs up was to leave the transmission in Sport mode and keep the throttle buried. That was one of the few real disappointments from our first drive experience: With its emphasis on handling over power, we never thought the automatic transmission was too much of a detriment in the old 86. In the GR 86, it is. We hope Toyota will reprogram that shift logic, and quickly.

We’d also like to see a bit more feedback from the steering. The ratio, effort, and weight of the steering is just about perfect, allowing for sharp, precise turn-in and easy adjustment of our line. But the feedback feels muted, as if we were wearing gauze gloves, and understeer was something we sensed more with our ears and butts than our hands.

One of our complaints about the old Toyota 86 was its ride quality. On our brief drive on the relatively smooth public roads surrounding the Monticello Motor Club, the new GR 86 did seem more compliant and comfortable, with no loss in handling agility. We’ll have to wait for our First Test on our home turf in Los Angeles, but we’re optimistic that the GR 86’s ride/handling trade-off will be no trade-off at all.

Truth is, our brief street drive was every bit as delightful, if not more so, than our extended track time. Out on public roads, the GR 86 puts it all together: It accelerates eagerly, tracks straight and true, flows through the curves, and follows orders with admirable accuracy. It’s quick—Toyota estimates a 0-60 time of 6.1 seconds for the stick and 6.6 for the auto—but not overwhelming. Just like the old car, the new GR 86 provides a relatively tame envelope of grip and power that lets you work the car hard without having to drive at speeds that make you a law enforcement target. That, to us, is just magnificent—what good is a sports car if you have to risk a ticket or your neck every time you want to drive it as it was meant to be driven?

What else can we criticize? Not much, except perhaps the tiny trunk and a back seat so small that it is practically imaginary. We tried to squeeze back there and failed miserably, and this with the driver’s seat adjusted for a 5-foot, 6-inch occupant. Aside from small children, the GR 86, like the 86 before it, is best considered a two-seater.

Toyota plans to offer the 2022 GR 86 in just two models, Base and Premium, the latter designated by a larger trunk spoiler, upgraded interior trim, a couple extra speakers for the stereo, and 18-inch wheels with Michelin Pilot Sport 4 tires. The base model comes with 17-inch Michelin Primacy HPs, the same sort of rubber you’d find on a beige Camry, and frankly there’s something to be said for this option—the cheaper tires let you slide around more, and in a car like the Toyota GR 86, that’s three-quarters of the fun. Pricing hasn’t been set, but Toyota promised us the base model would be “comfortably” under $30,000. Even so, expect a bit of a bump over the outgoing 86’s $28,055 base price.

Overall, our first impressions of the 2022 Toyota GR 86 are overwhelmingly positive. This is a great new interpretation of an old favorite, and we love that Toyota has made meaningful improvements without ruining the basic character that made the original so wonderful. We can’t wait to get more seat time in the 2022 Toyota GR 86.