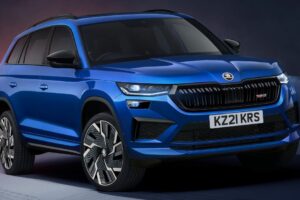 Skoda’s flagship SUV, the Kodiaq, has just received a midlife refresh. The redesign is rather subtle, and may take a pair of keen eyes to spot the difference. Nevertheless, there’s new equipment, trim levels and upgraded safety systems to bring this seven-seat SUV up to parity.

On the design front, the fascia is fitted with a new grille that is similar in size as before, but made bolder thanks to thicker frame surrounds. LED headlights with LED daytime running lights are now standard across the board, although customers can upgrade to the full LED matrix headlights as an option.

Other visual nip and tucks include a slightly reprofiled front bumper (the top vRS gets its own unique piece), revised lower valance, plus a selection of new alloy wheel designs that measure up to 20 inches in diameter. The blue vRS variant pictured above rides on the exclusive 20-inch Sagitarius alloys.

Revisions at the back are much more subtle, this time featuring the Skoda script along the tailgate as opposed to the roundel from before. The C-shaped LED tail lights have also been slightly reworked, as have the lower bumper with faux integrated exhaust exits and gloss black rear spoiler. Skoda says the new spoiler enables a drag coefficient value from 0.31, depending on the variant.

Inside, you’ll find new trim materials and seat designs, including the option of upgrading to power adjustable leather seats with memory, heating, ventilation and massage functions. The two- and three-spoke steering wheels have been carried over, but feature more functions than before.

An eight-inch touchscreen infotainment system is the bare minimum offering, but a larger 9.2-inch system can be specified. Both systems have built-in eSIM functionalities, so map and software updates can be done over the air. Wireless Apple CarPlay and Android Auto support is standard, while the range-topping sound system is the upgraded 625-watt 10-speaker Canton sound system. A 10.25-inch Virtual Cockpit is standard on the vRS, but optional on other trims. This has been redesigned with five different graphical layout, those being Classic, Extended, Modern, Basic and Sport. The SportLine and vRS trims get model-specific graphics. Other niceties include USB-C charging ports, a wireless charging tray, and an optional USB-C port at the back of the rear-view mirror to power a dashcam.

There are up to 45 “Simply Clever” details that owners will find helpful, such as an integrated funnel for the windscreen washer tank, powered tailgate, 1.5-litre bottle holders for the front and rear doors, bag hooks in the boot, double-sided boot liner, ticket holder on the A-pillar, electrically retractable tow bar, and even an ice scraper in the fuel filler cap with a tyre tread depth gauge. The vRS, however, is now powered by the VW Group’s 245 PS/370 Nm 2.0 litre TSI mill for the first time, and it is 60 kg lighter than the biturbo diesel engine that it replaces. It now sprints from standstill to 100 km/h in 6.6 seconds, or about 0.4 seconds quicker than before. All engines are Euro 6d-compliant and get paired with a seven-speed DSG dual-clutch transmission, though entry-level 150 PS models get a six-speed stick instead.

Progressive steering is a standard feature in all but the SE and SE L trims (optional for SE L). This system is widely used in the VW Group and enables better handling at higher speeds and greater agility in corners. It also lightens up quite significantly when driving at lower speeds, making manoeuvrability much easier when driving in urban settings.

For safety, the Kodiaq can now be kitted with up to nine airbags, and the new Travel Assist incorporates five assistance systems, including Predictive Cruise Control, Adaptive Lane Assist and an improved version of Traffic Sign Recognition. Are you a fan of the Kodiaq?