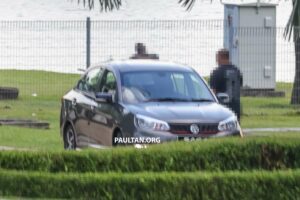 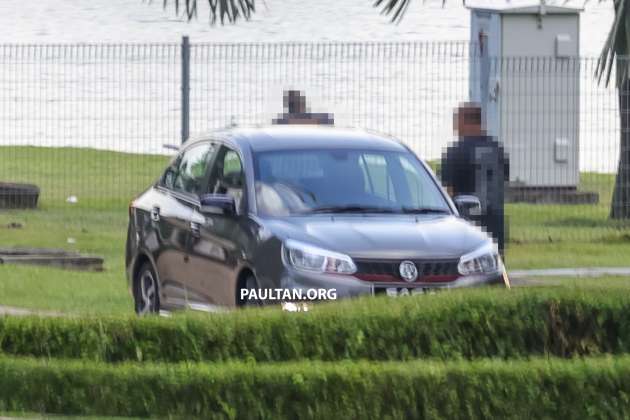 Proton has officially confirmed that the 2022 Proton Saga MC2 facelift will be launching in May. That’s this month, and there are slightly more than three weeks to go, so it’s truly just around the corner.

“The best-selling model in April however was the Proton Saga with 4,579 units sold leading to a year-to-date total of 14,028 units in its final full month of sales before the launch of the 2022 Proton Saga,” Proton said in its monthly sales report released today.

Now, a refreshed Saga isn’t a surprise, as we’ve shown you two rounds of spyshots in the past week alone. Don’t expect any mechanical or major skin redesign – exterior changes are limited to Proton’s new round logo; a red ethereal bow cradling the grille, X50-style; a bodykit for the top spec car; shuriken-style two-tone alloys; and black side mirrors. No changes to the lights and bumpers at both ends.

Inside, red highlights appear on the meter rings, central AC vent frame, little strips on the steering buttons and side AC vents. For an example on how coloured accents work on the Saga, check out the yellow on the Anniversary Edition from 2020. It’s more comprehensive here, though.

The AC control panel is new – it has knobs on either end and two buttons in the middle. The knobs look like those on the latest Iriz, and it looks a lot better than the current car’s basic three-dial layout.

It appears that there’s a new OS for the infotainment system as well, judging by the home screen, which has more icons and colour. There’s also a Perodua-style “please check your belongings” warning when one turns off the engine, reminding you to bring along your baby, bag and laptop. There’s also Proton’s new round logo on the steering.

A leaked document that made the rounds earlier this month tells us all we need to know about the Saga MC2. There’s will be a new range-topping 1.3L Premium S AT variant, and it will featuring the new 15-inch wheels and bodykit you see here, auto-fold side mirrors and an updated trunk lid with a release switch.

Other goodies listed in the document are an updated instrument cluster, leatherette covers for the steering wheel and seats, keyless entry with a push start button and a black headliner. Beyond that, the 1.3 Standard AT variant is set to receive electronic stability control (ESC). The 1.3 Standard MT won’t have ESC, but it will continue to exist as Proton’s sole manual transmission car. Not long now.