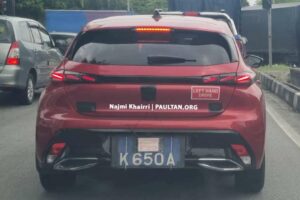 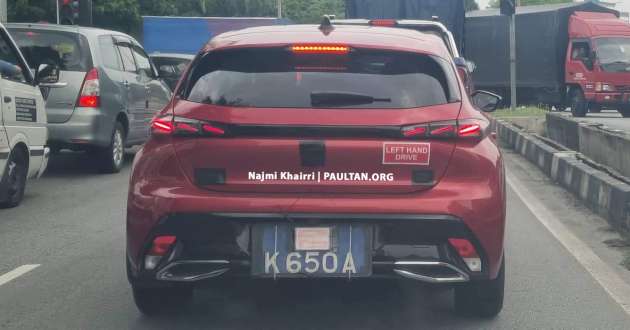 Indah khabar dari rupa is a popular Malay proverb that perfectly defines this story. A short 10-second TikTok video recently went viral for depicting what’s deemed to be the next-generation Perodua Myvi, but the actual car was in fact the third-generation Peugeot 308.

At the time of writing, the video has gotten over 2.1 million views and more than 1,000 comments, many of which were excited over the prospect of it being the new Myvi. There were several users who called him out, of course, but those who have no clue what the new 308 looks like would easily be misled by the video title and the usual charms of social media.

If you take a closer look at the rear of the hatch, there’s a red sticker – clearly outlined in white – that says ‘LEFT HAND DRIVE’. This is also pretty evident in the viral TikTok video. It was travelling in a convoy behind a Citroen DS3 Crossback. By the way, Perodua test mules are hardly ever spotted out in the wild, and even if they were, you can bet your life savings that they will be completely camouflaged.

Now, this is actually the exact same test car that was seen in Penang earlier in the year, but this time we get to take a slightly closer look at it. Standout features include a large panoramic sunroof, 16-inch dual-tone alloy wheels with Continental PremiumContact 6 tyres (205/60 R16), keyless entry on all four doors, black-painted side mirror caps, and GT Line kit.

The 308 is the first Peugeot model to wear the company’s new lion head logo, which is found on the radiator grille, front fenders, and tailgate (clearly masked up here). It rides on the same Efficient Modular Platform (EMP2) as before, but in terms of proportions, it’s 20 mm lower, 11 mm longer, and the wheelbase is stretched by 55 mm.

So far, the 308 is only available with three engine choices, starting with a 1.2 litre PureTech petrol, 1.5 BlueHDi diesel, and a 1.6 PureTech Hybrid. Outputs range from 110 PS to 130 PS for the 1.2 litre lump, while the plug-in hybrid can be had in either 180 PS or 225 PS tunes. There’s no indicative timeline for the launch of the new 308 here in Malaysia, and the same can certainly be said for the new Myvi.