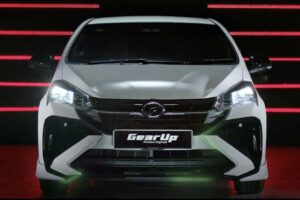 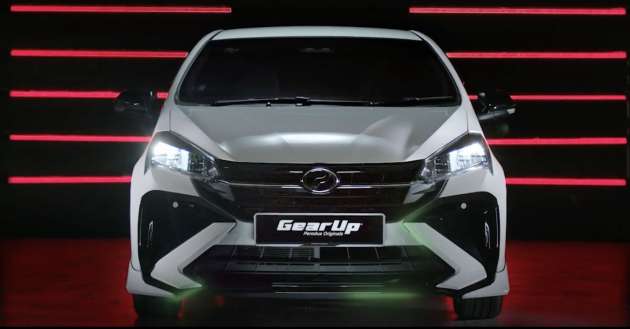 Perodua has released teaser footage of the GearUp bodykit for the 2022 Perodua Myvi facelift, following the appearance of leaked images of the bodykitted G3 facelift in Cranberry Red.

While the 2022 Myvi was offered with a selection of GearUp accessories, the latest iteration of the Malaysian favourite was not shown with the full extent of exterior accessories until now. What we can observe from the leaked live images of the GearUp kit is the black-out treatment of the outer areas where the LED daytime running lights are located on the un-kitted car.

Footage from Perodua confirms that the front lower lip also gets the gloss black treatment, and with the blacked-out outer areas of the front bumper, highlight the body-coloured diagonal ‘fangs’ to form an aggressive ‘X’ design for the Myvi’s face.

While the official film shows just the front of the car, the prior leaked images also reveal a two-tone treatment for the bodykit’s side skirts, namely in body colour and the contrasting gloss black. Relative to the AV trim, there’s considerable augmentation at the rear end, too, where the rear wing is replaced by a larger wing with longer side protrusions.

Like at the car’s front bumper, the rear bumper also gets extensions to match, and the middle section below the license plate area gets diffuser-style trim. This particular unit photographed also wears exterior door visors from the GearUp catalogue.

In terms of availability, Perodua states in its Facebook post that the GearUp kit is coming soon to all authorised Perodua showrooms. What do you think, dear readers? Is this GearUp exterior kit the setup of choice for your facelifted third-generation Myvi?