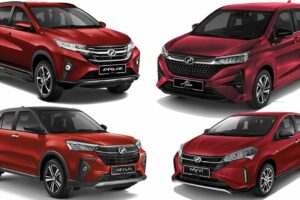 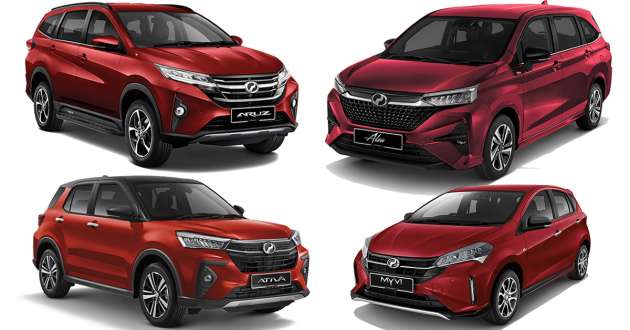 The second-generation Perodua Alza is the latest in the carmaker’s line-up to be powered by the 2NR-VE engine, which is also used by the current Myvi and Aruz. The 2NR-VE is a 1.5 litre DOHC naturally-aspirated four-cylinder with Dual VVT-i, and while it is shared by the three models, the outputs to differ slightly.

In this post, we’re examining how much it’ll cost to maintain the Alza over five years or 100,000 km relative to the Myvi and Aruz. For additional point of comparison, we’re also bringing in the Ativa with its 1KR-VET 1.0 litre turbocharged three-cylinder mill and D-CVT, which does overlap with the Alza and Aruz when it comes to price, as well as the original Alza that has the older 3SZ-VE 1.5 litre engine and 4AT.

As usual, some housekeeping is in order before we proceed. Firstly, the models mentioned are obviously aimed at different audiences, so this post is purely to show how much it’ll cost to maintain each of the four models that Perodua customers with a slightly larger budget may be considering. If you’re looking for a maintenance cost comparison involving the Alza and its rivals, we’ve already done one with the Mitsubishi Xpander and Honda BR-V which you can check out here.

Secondly, all the figures in these tables are pulled from the official maintenance schedules that are readily available at Perodua’s website at the time of writing. All good and clear? Let’s dive right in.

As you can see, the cost of maintain the Alza over five years/100,000 km doesn’t differ significantly from its stablemates. Compared to the Aruz, the seven-seat MPV is RM81.55 more costly to maintain, while the gulf widens to RM216.86 against the Myvi.

The Ativa is the costliest to maintain of the bunch, although by only an extra RM17.04 compared to the Alza. It should be noted that divided over five years, these differences are largely negligible. In the case of the first-generation Alza, the OG is the cheapest to the bunch when it comes to scheduled maintenance, although the sum climbs to RM3,481.06 when all optional Pro Care items are included (RM660.70).

Looking at the itemised schedules, the costs of the engine oil (fully synthetic), oil filter and brake fluid used by the new Alza, Myvi, Aruz and Ativa are identical, with the exception of the old Alza that uses a more affordable semi-synthetic engine oil. The new Alza’s engine drain plug gasket is the costliest too, although it doesn’t require a coolant top up within a five-year/100,000-km ownership period like its siblings.

When it comes to big-ticket items, the Alza, Myvi and Aruz require new iridium spark plugs at 60 months/100,000 km at a cost of RM220.40, which is a lot less than the Ativa’s spark plugs that cost RM471.90. The previous Aruz’s spark plugs are changed every 12 months/20,000 km, which costs RM302 in total over 100,000 km/60 months. All the D-CVT-equipped models also get their transmission fluids changed at the same point, which is priced at RM101.30 inclusive of the drain plug gasket. Meanwhile, the 4AT models (Aruz and old Alza) need two transmission fluid changes every 40,000 km/24 months.

The rear-wheel drive Aruz’s driveline requires the lubricants for the four-speed automatic and rear differential changed twice over five years at two-year/40,000-km intervals, with each time costing RM151.50. The Aruz does require less frequent cabin filter replacements (every 18 months/30,000 km), which does offset the maintenance cost.

The Aruz’s official service schedule also lists Pro Care service items that are optional. These include air filter (for the engine) and brake fluid changes at 12 months/20,000 km; 36 months/60,000 km; and 60 months/100,000 km, along with tyre alignment, balancing and rotation ever 12 months/20,000 km. There’s also a spark plug change at 30 months/50,000 km. Including all the Pro Care options across five years will add RM738.10 to the Aruz’s maintenance bill.

As always, there’s more to overall running costs beyond the visits to the service centre. For instance, road tax differs between SUVs and non-SUVs. The Alza and Myvi are RM90 yearly, but it’s RM120 for the Aruz and just RM20 for the Ativa.

There’s also the matter of consumables like tyres, which can differ wildly in price according to wheel sizes. The Alza’s wheels range between 15 and 16 inches in size, it’s between 14 and 15 inches for the Myvi. As for the SUVs, the Ativa’s alloys start at 16 inches and go up to 17 inches, with the latter being the standard for the Aruz.

Brakes are another consumable too, and the Ativa, Myvi and Aruz use front disc brakes and rear drum brakes. This is also true of the Alza, although the top-spec variant of the MPV comes with front and rear disc brakes to go along with its first-for-a-Perodua electronic parking brake.

Adding to this is fuel consumption, which differs based on driving style. Referring to Perodua’s official claimed fuel consumption figures, the Myvi is the most economical of the four models compared here, delivering 21.1 km/l according to the ECE standard, followed by the Ativa (18.9 km/l) and Aruz (15.6 km/l). The Alza according to the NEDC will do 18.9 km/l, or 22 km/l in the Malaysian Driving Cycle.

So, there you have it. The new Alza is costlier than its predecessor to maintain over five years/100,000 km, although the total cost doesn’t differ that much from Perodua models being sold today, which is good to know if you’re considering any of the four current models compared here. Thoughts?