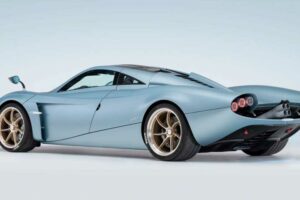 We’re just going to flat out tell you: even though Pagani made five of the Codalunga version of the Huayra, you can’t have one. They are all already spoken for with their nearly $7.4 million (at time of publishing) price tag starting point. Each one was tailor made for each owner, but Pagani Grandi Complicazioni made sure that each Codalunga had that 1960s Italian coachbuild look to them. And, boy, are they some beautiful looking cars.

When looking at the Codalunga, you almost can’t tell that it started life as a Huayra. The hints are there with the side window shape, the door lines, where the mirrors are placed, and its headlights. Despite that, the Codalunga is such a different looking car that you’d be forgiven for thinking that it wasn’t. Its lines are simple, yet flow well with this body. The racy look remains, but just in a different way and without the rear wing. It still has its front fangs, but they are now wider apart than on the standard Huayra. Its front opening in the bumper is more like a mouth gasping at just how much this cosmetic surgery has changed it. You can also see that the rear end is not only longer but its iconic quad pipe exit and tail light design are very different.

Immediately, you know just what Pagani Grandi Complicazioni were trying to achieve with the Codalunga. If you were to take it and place it on the grid of the 1960s or even 1970s Le Mans grid, it wouldn’t look out of place. Its APP Tech forged Avional 20 inch front and 21 inch rear wheels are mounted with a set of Pirelli PZero Corsa tires in 265/30R20 front and 355/25R21 rear, giving this car plenty of grip without the need for a massive wing.

Its suspension is all modern with forged aluminum alloy wishbones while its brakes are Brembo carbon-ceramic discs measuring in at 16.2 inch front and 15.4 inch rear. The calipers are also from Brembo with six piston, one-piece calipers on the front axle and four piston, one-piece calipers on the rear. The chassis all of it attaches to is made from carbon-titanium alloy and carbon-triaxial weave composite materials rather than the aluminum and steel you’d expect from a 1960s racer. When all said and done, the Codalunga tips the scales at just 2,822 lbs. Propelling it down the straights to the nearest Italian coffee shop is the ever impressive Pagani 6.0 liter twin-turbocharged V-12 producing 829 hp at 5,900 rpm and 809 lb-ft of torque from 2,000-5,600 rpm. It’s backed by an Xtrac seven-speed sequential transmission for true, racecar inspired performance.

While the performance is as impressive as the car is beautiful, Pagani Grandi Complicazinoi weren’t content with just any interior design. It’s equally as eye-catching as the exterior is. What isn’t wrapped in aged suede leather or machined from single blocks of aluminum is painted to match the exterior color, with other parts of the carbon fiber interior left exposed but with a matte finish. It’s a modern take on classic, handcrafted coachbuilt vehicles the Codalunga was aiming for. Moreover, despite being such a custom-made, extremely limited production, the five Huayra Codalungas are still road legal with all of the safety and emissions features required for where its owners drive it. At nearly $7.4 million just as a starting price, they ought to be. For those five lucky owners, you can’t help but envy that they have the privilege of experiencing the enchanting vision of the Codalunga. It’s absolutely one helluva looker.