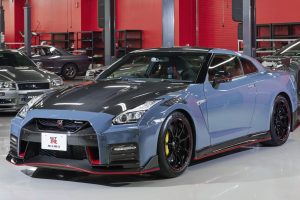 The R35 Nissan GT-R seems to be immortal. Not only is the current generation still around, Nissan has just unveiled the 2022 Nissan GT-R Nismo, which is back for a new model year. The GT-R Nismo, along with a special edition version, is set to launch in Japan in October.

The company’s performance flagship and icon will be offered in the new, Nismo-exclusive Nismo Stealth Gray body colour, which Nissan says was inspired by track tarmacs GT-Rs have set records and competed on. As they can’t just say that this sort of grey is “trending” and in-fashion these days, we’ll accept the tarmac inspiration. Bluer than most – what do you think of Nissan’s take on Nardo Grey?

The special edition of the car features a Nismo-exclusive clear-coated carbon fibre hood. Not choosing a painted hood not only exposes the intricate CF weave, it also saves 100g in weight. The special edition rides on exclusive 20-inch Rays aluminium forged wheels with a red accent that matches the red pinstripes around the body. The other carbon bits you see on the nose, sides, vents and rear wing are existing parts. For the first time, the new Nissan logo first seen on the Nissan Ariya electric SUV is placed on the rear and wheel centre caps. As this is a GT-R, there are no Nissan logos for the front and steering wheel.

The rest of the hardware, which has been honed over the years, are unchanged. Under the hood is the venerable VR38DETT 3.8 litre twin-turbo V6 with GT3 racecar-supplied turbochargers (modified turbine shape and fewer blades), 600 PS and 652 Nm of torque. A six-speed dual-clutch transmission and all-wheel drive gets those horses on the road.

A car as fast as this needs mega brakes, and the carryover Brembo calipers and carbon ceramic rotors – 410 mm in the front and 390 mm at the rear – are the biggest ever fitted to a Japanese performance car.

The built-to-order GT-R Nismo special edition uses new high-precision, weight-balanced parts including the piston rings, connecting rods, crankshaft, flywheel, crank pulley and valve springs dialled in with tighter tolerances, delivering snappier revs and quicker turbo spooling. Each engine is handcrafted by its own takumi technician. The takumi certification plate on the engine is also in an exclusive colour.

Before the actual car is available in Japanese showrooms, the latest Nissan GT-R Nismo will make its sales debut at McDonald’s. In collaboration with the fast food chain and Tomica, the “Tomica Happy Set” will include a miniature toy version of the latest R35. The set meal will go sale for a limited time in Japan, from April 16.