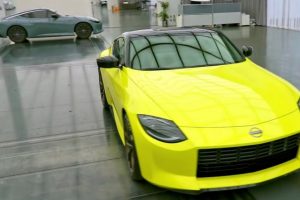 Last week, Nissan revealed the latest Pathfinder SUV and Frontier pick-up truck via a virtual launch event, with Alfonso Albaisa on hand to discuss the styling of the new models from the carmaker’s design headquarters located in Atsugi-Shi, Kanagawa, Japan.

As the vice president of global design at Nissan, Albaisa ended his presentation by stepping into the Z Proto concept, which previews the brand’s upcoming sports car, reportedly called the 400Z. The yellow show car is something we’ve seen before, but what’s interesting is the car placed just behind it.

Spotted by members of the NewNissanZ forum, the car certainly looks nearly identical to the Z Proto, save for the different grey paintjob, which is potentially a new colour for the sports car. There are also some slight differences from the concept.

For starters, the grey car wears a different set of wheels from the Proto Z and the side skirts are simpler in design, without any black trimmings. The small, side quarter windows are also not as heavily tinted, while the concept’s Z badge is missing from the rear quarter panel. It’s being speculated that this could be the production version of the Z Proto, but there’s also another possibility that we’re just looking at a clay model. Only Nissan knows for sure, and Albaisa has said in the past that the production 400Z will look just like the Z Proto, which is good if you like what you saw the first time.

As for what’s going on under the bonnet, Instagram user layersworks snapped a few photos of the Z Proto being placed at Nissan Crossing earlier in January, where it looks like the car will get the same 3.0 litre twin-turbo V6 found in the Infiniti Q60 Red Sport 400.

That engine makes 400 hp and 475 Nm of torque in the Infiniti coupe, which is certainly plenty, but only Nissan can decide how much the production Z car will get. Rest assured that a six-speed manual will be made available, along with the option of an automatic.