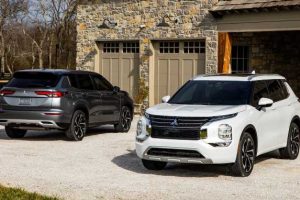 The 2022 Mitsubishi Outlander first drive we’ve just completed proves the new Outlander is, without pretense, the realization of an idealized future. The Japanese automaker’s latest crossover SUV is the most modern and segment-competitive product to wear the triple-diamond crest in, well, at least 15 years. It’s not perfect—far from it—but if the slow resuscitation of Mitsubishi Motors in the U.S. is ever going to happen, it will be on the backs of solid SUVs like the new Outlander, and not small sports coupes and rally specials. We’re sorry to say it, but it’s time to move on, Evo fans.

Even prior to Nissan taking a controlling stake in the brand back in 2016, the automaker appeared content to sit on the fringes of the U.S. market, not bothering to chase competitors Honda and Toyota for a larger slice of the pie than it already had on its plate.

So, with Nissan’s arrival into the picture, we knew—or hoped, rather—the fruits of such a union would slowly lift Mitsubishi from its willful doldrums. Nissan has gone through its own fair share of shakeups, setbacks, and slumps in the past five years, but as it continues to stabilize, it seems the control-partnership between the two automakers remains rock steady.

The 2022 Mitsubishi Outlander is our best barometer for this. Underneath the new Outlander’s bold chrome-laden exterior rests the bones of the current-generation Nissan Rogue. Mitsubishi reps were quick with their language when describing the development process behind the car, and mentioned only that while development at “the Alliance” began together, the two companies diverged at some point and created their own products from the shared platform.

We believe them—but after a few hours in the new 2022 Outlander, we also believe there is a significant amount of Rogue in the Outlander. That’s a damn good thing, Mitsubishi; we know you’re not going to brag about the Rogue roots, but a shared-platform product with one of the world’s largest automakers could only be a good thing.

We don’t believe the new Outlander to be badge engineered—such a nasty phrase—as there are enough fundamental differences between the two SUVs to render them entirely different products. Chief among them is the Outlander’s exclusive three-row, seven-seat configuration not shared by the Rogue or anything else in the Rogue’s space, though the Outlander can be seen as a bit of a segment straddler.

It’s longer, wider, and taller than the Rogue, Toyota RAV4, and Honda CR-V, but smaller than the equivalent segment step-ups. It’s bigger than the outgoing Outlander, too. A side-by-side comparo reveals an additional 2.0-inches of width and 1.5-inches of height. The wheelbase gains another 1.4 inches, contributing to an additional 1.0-inch of front and 1.1-inches of rear legroom, respectively.

2022 Mitsubishi Outlander: Only One Powertrain—For Now

For now, the new Outlander’s sole powertrain configuration is the naturally aspirated 2.5-liter Nissan PR25DD inline-four cylinder, offering up a square 181 horsepower and 181 lb-ft of torque through a CVT with eight simulated forward gears. Front-wheel drive is standard, though Mitsubishi’s proprietary S-AWC all-wheel-drive system is available. Mitsubishi’s standout model in the mid-to-late 2010s was the plug-in variant of the Outlander, and Mitsu reps have already confirmed the future arrival of an Outlander PHEV. After some extended seat time in the 2022 Outlander through the hills and highways of Orange County, California, we reckon the PHEV is the one to wait for if you’re eco-minded or you’re coming from something with more than 200 hp.

The 181 hp is adequate for pulling the Outlander’s almost two-ton bulk around, but only just. Zero-60 mph feels somewhere in the mid-to-high eight-second range—hardly dangerous—but remember, this is a three-row SUV. The very nature of a crossover implies the hauling of family, friends, dogs, furniture, mulch, luggage, tires, bikes—whatever. Many people purchase vehicles based on those vehicles’ ultimate potential—trucks, sports cars, and yes, SUVs—but you can bet your butt there will be a fair share of 2022 Mitsubishi Outlanders struggling around at full capacity.

For now and on this first drive, it was just us by our lonesome in our loaded SEL S-AWC-model loaner. The CVT is just as smooth and seamless as any other beltbox, but like so many other CVT-based powertrains, the whole experience is cheapened by the combination of poorly dampened engine sound and the CVT’s need to hold the engine at high rpm. The result is an echoing mechanical thrash that permeates the whole experience when you put the gas pedal to the floor, and remember, with only 181 hp and a whole load to haul around, you’re going to floor it often.

This is hardly a fault unique to Mitsu, but it’s worth noting. Also worth noting is the 2022 Outlander’s above average handling and chassis control; we were skeptical as to why Mitsubishi’s planned route for this first drive review had us run up one of OC’s more popular canyon roads, but after a few minutes on Ortega Highway, we were pleasantly surprised. The Outlander is no BMW X3 M—or Mazda CX-5 for that matter—but it sluiced through the squiggly pavement with poise far beyond the requisite. Body lean was present but not disastrous, and while the steering was both light and vague, turn-in was quick enough to not fall on its face.

A modern platform does wonders for an old nameplate. Much of the hardware underneath the 2022 Mitsubishi Outlander’s skin is lighter and stiffer than the old SUV’s, particularly with regard to the suspension. Brakes are bigger, too, a welcome addition to a car that’s only grown in size. After we settled down and stopped treating the Outlander unlike any normal consumer ever would, the ride was comfortable and well-damped, though we would have appreciated a bit more granular isolation.

The interior is by far and away the most impressive aspect of this generational shift. Compared to the egregiously outmoded interior duds of the prior Outlander, this might as well be a Rolls-Royce Cullinan; well, maybe a Lexus, at least. We’re happy to report the majority of plastics, switchgear, leather, stitching, and touchpoints are all absolutely on-par with Toyota, Subaru, and—of course—Nissan.

It’s a massive visual improvement as well. All of the late 2000s-era aesthetic was purged in the transition to this new Outlander, making way for a clean and modern bi-level horizontal theme that, when spec’d correctly, adds a handsome unbroken air-vent design on the center dash. Dig deep into the trim levels and you’ll come away with an armful of couture stuff like quilted leather surfaces and real aluminum trim.

Most of the hardware, including the HVAC controls, infotainment display screens, and terrain selector are either shared with or reskinned versions of the Nissan SUV. Again, Mitsubishi, we’re loathe to fill much of this first drive review with references to Nissan, but this shared stuff is a good thing and will only help in the long run, we promise.

Overall, our loaded-out test example was a pleasant place to spend a few traffic-locked hours inside of. Mitsubishi added its own differentiating knurled texture and trim touches to much of the switchgear and rotary dials, including the bulky terrain selector, where an impressive range of drive modes are available, including Tarmac (Sport), Gravel, Snow, and Mud, aside from the standard Normal and Eco modes. We only ventured into the sport-minded Tarmac for the better sections of our drive, and noted a change in transmission programing and throttle sensitivity.

If the old Outlander was threadbare, the new SUV is a relative cornucopia of tech toys. The most significant improvement is the standard 8.0-inch center infotainment display with both Apple CarPlay and Android Auto, though we spent our time with the optional 9.0-inch unit. Stick with the 8.0-inch screen, and a new 7.0-inch display screen fits between two traditional analog gauges. Adding the 9.0-inch infotainment display also adds a fetching 12.3-inch configurable digital display cluster and an available head-up display. Sharp stuff.

These aren’t half-baked features, either. Mitsubishi’s proprietary infotainment system is quick and mostly easy to navigate, as is the configurable digital gauge display. It does a flattering imitation of Audi’s MMI system, with a choice of different views and data displays. Other optional finery includes wireless smartphone charging, panoramic sunroof, heated and ventilated seats, heated steering wheel, and a 10-speaker Bose sound system. This was space-age stuff to the Outlander of yore.

This coddling extends to the rear passengers, too. If you’re going to haul some folks around, spring for the optional heated second row that also adds USB and USB-C ports and retractable sunscreens for the windows. Three-zone climate control is also a first for Mitsubishi, so don’t expect to hear much grousing from the backseat drivers, at least not about their comfort.

2022 Mitsubishi Outlander: Emergency Use Only

Speaking of the backseat—er, back-back seat—the third row is for emergencies only. By “emergencies” we mean a 10-minute drive to the family reunion dinner, or a last-minute pickup from soccer practice. Even small kids will struggle to get comfortable in the two-seat jump-row, but hey, we’re just happy there is a third row at all. For the record, the Volkswagen Tiguan is the only other three-row SUV of the same relative size.

Of course, that entire row stows when not in use to give the full benefit of the area behind the second row, though we’re not privy to interior storage dimensions just yet aside from the 78.3 cubic feet behind the first row. There are plenty of second-row configurations, with an unusual 40:20:40 split that allows for folding of each individual seat.

The 2022 Mitsubishi Outlander is a fantastic effort by automaker. It’s thoroughly modern, comfortable, nice to drive, well-equipped, smartly packaged, and stupendously priced. A stripper front-wheel-drive Outlander will set you back $26,990, jumping all the way up to $36,445 for the top-of-the-line loaded all-wheel-drive SEL w/ Touring package, at a time when the average new car changes hands for around $40,000. Keep it up, Mitsubishi—we can’t wait to see what comes next.