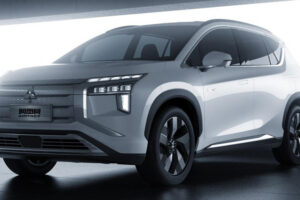 After teasing the Mitsubishi Airtrek, the Japanese carmaker has revealed the all-electric SUV at the Chongqing International Auto Industry Fair (Auto Chongqing) in China. As we’ve known previously, the Airtrek will be built by GAC Mitsubishi Motors (GMMC), which is a joint venture between Mitsubishi and Guangzhou Automobile Group (GAC).

Reports indicate the model will be based on GAC’s Aion V, albeit with a completely new skin as you can see here. The Airtrek boasts Mitsubishi’s signature Dynamic Shield front, which is accompanied by a dual-tier lighting setup that is reminiscent of the Mi-Tech Concept). The latter consists of daytime running lights positioned above the L-shaped main headlamps.

Given that the Airtrek is an EV, the grille and the rest of the bumper is closed off, with the only prominent intake being located in the lower apron. Along the sides, the Airtrek features flush door handles just like the Aion V, but the blacked-out C-pillars, which create the “floating roof” look, are a little more restrained in their appearance.

At the rear, T-shaped taillights extend towards the rear fenders, joined by a hexagonal scalloped tailgate section. Unlike the Aion V, the rear bumper has a simpler look that is devoid of vertical reflector sections in the corners. The Aion V measures 4,586 mm long, 1,920 mm wide and 1,728 mm tall, with a wheelbase that spans 2,830 mm, making it smaller than the Outlander.

These images also give us our first look at the Airtrek’s interior, which is also of a minimalistic design. Highlights include a large infotainment touchscreen placed above the centre air vents on the dashboard. The touchscreen is kept separate from the instrument cluster, which is different from the Aion V’s merged displays approach.

Meanwhile, a raised centre console houses a rotary gear selector, cupholders, wireless charger and other vehicle controls, with additional storage space located below this area. The armrest and door cards are also specific to the Airtrek, bearing no resemblance to the Aion V.

Mitsubishi has yet to reveal powertrain details for now, but if it’s confirmed that the Airtrek is based on the Aion V, it should ride on the same GAC Electric Platform 2.0 (GEP 2.0). The Aion V is equipped with a front-mounted electric motor rated at 184 PS (181 hp or 135 kW) and 350 Nm of torque, and is capable of between 500 to 680 km of range, depending on variant.