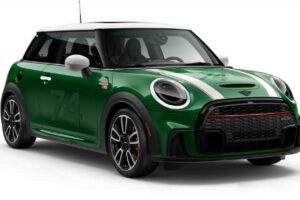 Celebrating 60 years since making its debut at the racetrack in 1961, Mini is releasing a new limited model honoring its racing heritage. The 2022 Mini JCW Hardtop Anniversary Edition highlights three generations of the Cooper family and Mini brand collaboration.

This new special-edition Mini is based on the John Cooper Works Hardtop two-door, a model that has a strong connection to the Cooper family and Mini partnership over the last six decades.

The two-door hot hatch is offered exclusively in British Racing Green—a hue with its own special racing history—here in the U.S.; other markets will be available with other colors. Mini sets off the green main body color with white hood stripes, red accents, and a white roof and mirror caps. The number 74, prominently featured on the doors and hood, pays tribute to the first race the Mini Cooper entered sporting the same number.

Inside, the signatures of John Cooper, John Michael Cooper, and Charlie Cooper are etched in the cockpit fascia, honoring the work between the British automaker and the Cooper family. Moreover, the Cooper Car Company logo is added to the door sills and side scuttles complete the look.

The Anniversary Edition includes a touchscreen with navigation and a panoramic moonroof; neither are special-edition exclusives, just nice to have. The limited-run 2022 Mini JCW Hardtop Anniversary Edition starts at $40,750 and is now available at dealerships.