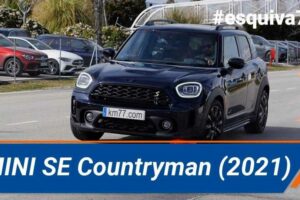 When we experienced the Mini Countryman Cooper SE PHEV a few years back, we were impressed by how well it holds the road, the precision of the steering and the body control. It was still noticeably less agile than non-plug-in variants, though, due to the extra weight of the battery, which you could really notice, especially if you had previously driven other Countryman versions.

For reference, the SE plug-in hybrid is around 550 pounds (250 kg) heavier than the regular S, even though it has a smaller (and lighter) 1.5-liter engine, as opposed to the S’ 2-liter. What brings the SE’s weight all the way up to 3,780 pounds (1,715 kg) is a 10 kWh battery pack and a rear-mounted electric motor. As a PHEV, though, it does become an all-wheel drive vehicle.

With that experience in mind, this new video by Km77, which shows a Countryman SE being subjected to the moose test, is even more impressive to watch. With an entry speed of 49 mph (79 km/h), almost as good as the gas-burning Cooper S hatch that the outlet previously tested.

The vehicle’s impressive agility shines again in the slalom test – they praise the plug-in Countryman for being able to quickly change direction in spite of its extra weight. Acceleration was another point of praise they had for it after the slalom test and you can even see in the video how quickly it picks up and accelerates when it turns around at the end of the course.

This strong acceleration consistent with what we experienced when we tested it – with plenty of juice in its 10 kWh battery pack and all-wheel drive traction, the Countryman SE shoots off the line quicker than you may think, even when you see that it makes 220 horsepower  and sprints to 62 mph (100 km/h) in 6.8 seconds.