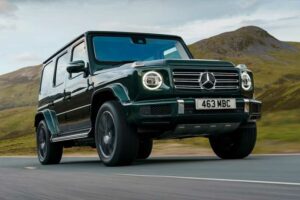 “I thought it would be blinged-out for Dubai or Miami,” said my son-in-law when he caught sight of the 2022 Mercedes-Benz G400d for the first time. But it wasn’t just the tasteful dark green metallic paint over the macchiato beige and espresso brown interior, perfect for a sunny weekend among the Range Rovers swarming the picturesque stone villages of England’s Cotswolds, that caught his attention. It was what was under the hood. “It’s a diesel!” he realized, incredulously.

Launched in 2018, the present Mercedes-Benz G-Class is an obsessively crafted rework of the Geländewagen originally designed in the 1970s as a go-anywhere 4×4 workhorse for the military and farmers. It has a new chassis with independent front suspension, the latest-spec Mercedes engines and transmissions, a completely redesigned body, and a leather-wrapped interior with screens and all the connectivity you expect in a 21st-century automobile.

It’s smoother, faster, and more luxurious, with more room inside and better ergonomics than the original G-Wagen. But it has the same exposed door hinges, the same push-button door handles, and the old-school central-locking system that sounds like someone slamming the breech on a howitzer when you press the button on the key fob.

With 9.3 inches of ground clearance, excellent axle articulation, and three lockable differentials, the modern G-Class also still has the chops to go wheel to wheel with a Jeep Wrangler Unlimited, or a Land Rover Defender 110, or a Toyota Land Cruiser when you run out of road. But it exists not because it’ll confidently take you across Africa. It exists because it’s good business: Mercedes-Benz last year sold 8,523 G Classes in the U.S., split between the entry-level $131,750 G550 and the $156,450 G63.

You read those prices right: The original G-Wagen cost a fraction as much as an S Class when launched in 1979. It’s now the most expensive non-Maybach-badged Mercedes you can buy in America. And it’s the most customizable Mercedes of them all, offering more exterior colors—a whopping 37, including 14 special hues available under the G-Class-only G Manufaktur program, each priced at $6,500—and more leather colorways (up to 31 in the AMG G63) than any other model.

Four G-Class models are built in the Magna Steyr plant in Austria, which has produced more than 400,000 of the go-anywhere Benzes since the original G went into production more than 40 years ago. The G550 has the 416-hp, 450-lb-ft, 4.0-liter twin-turbo Mercedes V-8 under its hood, while the G63 gets the bonkers 577-hp, 627-lb-ft AMG version of the engine. But perhaps the more interesting G-Class models are the ones you can’t get in the U.S., the G350d and G400d, both of which are powered by Mercedes’ 3.0-liter straight-six turbodiesel, codenamed OM656.

Though both are less expensive than their gas-powered siblings, neither is exactly cheap. In the U.K., the G400d, which comes only in the fully loaded Premium Plus specification, costs 75 percent as much as a G63, which suggests a U.S. sticker of about $118,000. That’s more than the cheapest new Range Rover, a third more than you’ll splash on an entry-level Lexus LX600, and $33,000 more than you could possibly spend on a Jeep Wrangler Rubicon 392 with all the toys.

Short answer: yes. The 2022 Mercedes-Benz G400d commands its price fairly, and for precisely the same reasons the G550 and G63 effortlessly shoulder their hefty price tags. Part factory restomod and part automotive performance art, the Mercedes-Benz G Class is as defiantly indifferent to the norms of automotive fashion as a Morgan Super 3, its raw charisma underpinned by its genuine off-road capability and amplified by its relative rarity. What’s under the hood is almost irrelevant.

Almost. And this is where the G400d makes a compelling case as the pick of the G-Class lineup. Sure, the loud and angry AMG G63 is fun—if only for terrorizing unsuspecting BMW M3 drivers at traffic lights—but it’s difficult not to struggle with its prodigious thirst. And yes, the G550 is also quicker to 60 mph than the G400d. But it’s not $13,000 quicker.

The most impressive numbers, however, are the ones you see at the pump: We covered 297 miles in a G400d, a mix of British motorway running at 70 to 80 mph with some lengthy stretches at 50 mph because of roadwork, plus two-lane country road cruising at 40 to 60 mph and a 15-mile haul through traffic across central London. The fuel gauge indicated the 26.4-gallon tank was just more than half full at the end of the trip. Assuming the worst—that the big Mercedes had actually used half a tank of diesel—this indicated our fuel economy to be about 22.5 mpg, slightly better than the official (Euro cycle) combined rating of 21 mpg.

Dieselgate means this G-Wagen model is persona non grata in the U.S., but the OM656 is a helluva engine, not just impressively fuel efficient but also responsive, smooth, and quiet right through the rev range. Which is just as well, for although the G400d has seriously off-road capable suspension, bump-thump and general road noise are well suppressed, helped by the meaty 275/50 Pirelli Scorpion Zero tires with their generous sidewalls. At 75 mph with the straight-six diesel murmuring softly at 1,600 rpm in ninth gear, the wind rustling off the flat windshield and around the A-pillars is pretty much the loudest noise in the G400d’s cabin.

You ride high, wide, and handsome in the G400d, towering over Range Rovers and lesser, car-based SUVs. However, it doesn’t feel unwieldy and the iconic turn signals atop the front fenders allow you to place the Mercedes on the road with great accuracy. This is useful in bumper-to-bumper, door-handle-to-door-handle city traffic, or while threading your way down a narrow country lane.

True, the steering doesn’t have the honeyed accuracy of a Defender’s (it’s way more precise than that of a Toyota Land Cruiser, however), but the on-center feel is good, and the response is linear. Sure, the body rolls through corners and there’s a touch of movement from the live rear axle on uneven tarmac; this is a tall 4×4 with long-travel suspension, not a sports car. The key point is that all the motions are controlled especially well. The G400d doesn’t wallow down the road like a drunken water buffalo.

Certainly, there’s an honesty about the 2022 Mercedes-Benz G400d that’s hugely appealing. The diesel engine—relaxed, torquey, and efficient—suits the fundamental character of a Mercedes model that, beneath its carefully contrived styling and polite road manners, remains a seriously capable off-roader.