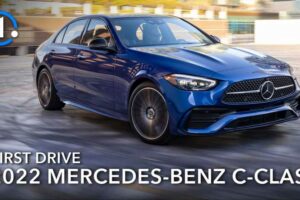 For some reason, Mercedes-Benz seems intent on tying the fate of the S-Class with that of the smaller C-Class. Whenever a new flagship appears, you can bet your hat that a redesigned compact sedan isn’t far off, usually following the styling and technology trends that its bigger sibling sets. That’s the case with the 2022 Mercedes-Benz C-Class, which arrives at US dealers this month in C300 form – AMG variants will follow later.

I recently took a spin in a loaded C300 Pinnacle 4Matic (the new flagship trim level), keen to see if it could live up to the Star Award-winning S-Class. As with most new Mercedes, the new C-Class boasts a wafting ride (yet good body control), technology that’s easy to use, and reasonable performance given its base-model positioning. Of course, it’s less than half the price of an S-Class, so there are some compromises in terms of cabin materials – acceptable at its $44,600 base price but a bit eyebrow-raising at my tester’s $62,520 sticker. But for the most part, the new C-Class lives up to the Mercedes-Benz mystique.

A vehicle’s verdict is relative only to its own segment and not the new-vehicle market as a whole. For more on how Motor1.com rates cars, click here.

I’m fairly confident that if you read any review of the 2022 C-Class, somewhere in there will be a reference to “mini-S-Class styling.” We automotive hacks may be a bit uncreative, but no more so than Mercedes’ designers. The C-Class’ pointed LED headlights, daytime running lamp eyebrows, arched roofline, strong shoulder crease, and a rounded rear end look a lot like those of the company’s biggest four-door sedan. Add the AMG exterior package (as my car had) and you get a different grille design cribbed from the E-Class middle child.

Of course, C-Class customers will love that their relatively inexpensive sedan looks like a much pricier one, so the common design cues aren’t bad. And the compact gets a few of its own special touches, such as twin power bulges in the hood – a retro-inspired cue that recalls the 1954 300SL – and sharp, pointed taillights that look appropriately aggressive given the C-Class’ more nimble size. One final update: Like the E-Class (and unlike the S-Class), every 2023 C300 gets the automaker’s sport-styled grille with a dinnerplate-sized emblem – gone is the previous generation’s rarely optioned Luxury Line grille and hood ornament.

There’s lots of Benz DNA inside the C-Class as well, ditching the old twin-screen monolith setup in favor of a sloping console styling and standalone digital instrument cluster, with five funky “squircle” HVAC vents spread across the top of the dash. My tester’s sweeping wood and aluminum trim is a $200 option, a bargain for how rich it makes the dashboard look and feel. Unfortunately, it can only do so much to hide the cheap-feeling piano black center console, though other interior trim options come with different finishes there.

Yet more concern arises on the doors. Although the armrests are well-padded, the floating window switch binnacle feels chintzy, and the forward part of the door panel is done up in hard plastic that looks and feels cheap whenever your knee hits it. Using inexpensive materials is acceptable when they’re well hidden – you won’t really notice the sides of the center console or the lower dashboard – but the doors put some of the cost-cutting on full display.

It’s easy to get comfortable in the C-Class, with plenty of space for the driver and front passenger. Once settled in, I turned my attention toward the coastal town of Encinitas, near San Diego. Traffic on the freeway was predictably lousy, so I decided to slow down a bit and route myself through the canyons above Malibu to suss out the C. Given its non-AMG place in the lineup – styling features aside – I assumed it would be dully competent on some of those plunging, twisty roads. Instead, the C300 4Matic obliged my hot shoe with sharp turn-in and a surprising amount of grip, as well as the throttle-on stability of all-wheel drive.

Also impressive is the amount of thrust available. The C300’s turbocharged 2.0-liter inline-four makes 255 horsepower at 5,800 rpm and 295 pound-feet of torque between 2,000 and 3,500 rpm, with Mercedes’ first four-cylinder application of its EQ Boost 48-volt mild-hybrid system. The integrated starter-generator can add 20 hp and 148 lb-ft at lower engine speeds, helping minimize turbo lag and improve smoothness. The sum of those parts is a reasonably responsive accelerator pedal, both when stepping off from a start and powering out of a tight hairpin corner.

Left to its own devices in normal traffic, the nine-speed automatic transmission is a smooth operator, but in Sport or Sport+ modes it feels a bit dull, and the gearbox doesn’t respond very quickly to the steering wheel–mounted paddle shifters. More eager downshifts when decelerating would be appreciated, as would less eager upshifts when acquiring speed.

The only other dynamic fault in fast driving is the brake pedal. Although the stoppers are more than capable of bringing the car to a halt without drama, the pedal itself requires a lot of pushing before actual braking happens, with a spongy, isolating feel that erases confidence when approaching a tight corner (or a sudden freeway stop).

Then again, canyon roads are more likely to be the purview of the forthcoming AMG C43 and AMG C63 models, whereas the C300 excels in daily driving. With steel springs and fixed-rate dampers, you might expect the C-Class to either ride harshly or wallow over bumps, but instead it sops up pavement imperfections and body motions with equal aplomb – nearly as comfortably as the larger E-Class’ optional Airmatic suspension. The C-Class’ interior is also quiet and serene at speed, with limited wind noise or tire roar and only the occasional grit from the turbo four under the hood, especially when it’s spinning near the top of the tachometer.

The heated and ventilated front seats are another boon for long-haul comfort thanks to cushy foam and a supportive design. And although they lack a massage function, they do get Mercedes-Benz’s “Kinetic” function. When activated, it makes tiny adjustments to the seatback and seat bottom angles and to the lumbar support, helping reduce fatigue on long trips.

In spite of its compact dimensions, the 2022 C-Class also has pretty comfortable rear quarters. Headroom and legroom were adequate for me (I’m 5-foot-11, with a 32-inch inseam), and the bench seat itself is nearly as supportive and as the front buckets are. A 60/40 split fold is standard, expanding the trunk beyond the spacious 17.9 cubic feet that are available with the seats up.

Helping keep the cost of those long trips down is a perfectly respectable 23 miles per gallon city, 33 highway, and 27 combined. Opt for rear-wheel drive and those numbers go up two ticks across the board. The BMW 330i does a bit better at 30 mpg with rear-wheel drive or 28 with all-wheel drive, and the Quattro-only Audi A4 gets an impressive 29 mpg combined if you’re willing to settle for 201 hp or 27 combined if you insist on 261 ponies.

Adding to the C300’s long-distance chops is a sophisticated driver-assistance suite. Every C-Class comes standard with automatic emergency braking and blind-spot monitoring, but my loaded tester also came with the $1,950 Driver Assistance package, which includes navigation-linked adaptive cruise control that slows for curves in the road, as well as active steering, enhanced blind spot monitoring, and lane-change assist. The C300 still requires hands on the wheel, but the technology helps it seamlessly blend in with surrounding traffic on a wide variety of roads.

The 2022 C-Class’ 11.9-inch infotainment touchscreen operates the latest version of MBUX software, which now uses the navigation map as an always-visible base layer, placing audio, phone, and comfort tiles above it to control various systems. As on other modern Mercedes, this system also learns its driver’s habits and schedules, suggesting routes, phone calls, and more based on the driver’s routine. MBUX is easy to use and logically laid out, with excellent touch, pinch, and pan responses.

In front of the driver is a standard 12.3-inch digital information display, which offers a variety of colorways and gauge styles to suit one’s personal taste. A full-screen map, efficiency information, and a minimalist function are also available to keep the driver informed and/or reduce distraction.

The C-Class also borrows one more neat feature from its S-Class kin: a huge variety of ambient lighting settings. Several different monotone and two-tone lighting cues are available, or the car can scroll through all the different options gradually, with lighting accents appearing on the dash and doors. It doesn’t add much functionality except showing off to your friends, but sometimes, a bit of driveway flash is enough for a luxury car owner.

Now in its fifth generation, the non-AMG C-Class is available in three different trim levels. The base Premium costs $44,600 with destination, with all-wheel drive adding $2,000 to the price. It comes well-equipped too, with standard heated seats, LED exterior lighting, a sunroof, and more. Jump into the Exclusive trim and you’ll get active parking assistance, a surround-view camera system that can detect damage even while parked, enhanced ambient lighting, and a Burmester audio system in exchange for $46,850 with rear-drive or $48,850 for 4Matic.

The top Pinnacle trim starts at $48,550, with my 4Matic tester demanding $50,550 at the minimum. The Pinnacle gets a head-up display and navigation with an augmented-reality display on the dashboard helping guide the way. To that, my car added $750 for metallic paint and $1,620 for leather (MB-Tex faux leather is standard, even on the flagship), as well as $450 for ventilated seats, $1,000 for a panoramic glass sunroof, $3,050 for AMG exterior and interior styling, and $1,950 for the aforementioned driver-assist suite. A handful of other extras brought its final price to $62,520. That’s a lot of cash for a compact sedan.

Does the extra 7 grand justify itself on the C-Class? It depends how much value one places on the historical link between Mercedes’ compact and flagship sedans. When the C-Class first debuted for the 1994 model year, it brought a dash of modernity to the automaker’s entry-level cars, just like the big-body, W140-generation S-Class did a couple years earlier. In the intervening five generations, not much has changed. The C-Class still looks up to its big sister, and the S-Class is more than happy to share with its kid brother.

In spite of some faults – those squidgy brakes, as well as some hard plastic that’s placed a bit too obviously in the cabin – the 2022 Mercedes-Benz C-Class still carries that big-body gravitas. With impressive ride comfort, surprising back-road verve, and wannabe-AMG styling, a C300 is all but guaranteed to please either repeat customers or first-time Mercedes owners, giving them the three-pointed-star experience we’ve come to expect from the brand. Even if they have to pay extra to get it.