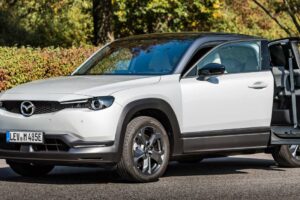 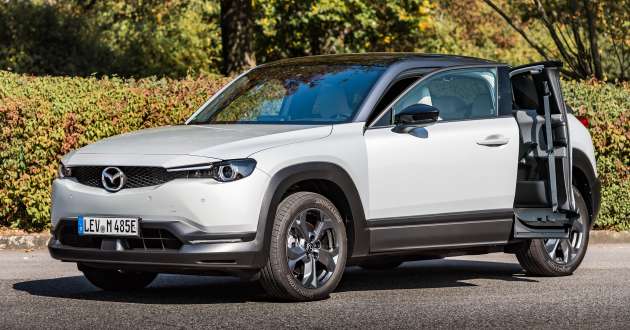 Mazda has updated its first mass-production EV, the MX-30, for the 2022 model year, which will go on sale in Europe from July this year. The MX-30 was first introduced in October 2019 and is currently available in Europe and the United States, with Malaysia set to join the list following a preview held last month.

Getting into the technical updates first, the latest MX-30 features enhanced charging performance to “make it even easier to use,” according to the carmaker. For starters, the EV now supports three-phase AC charging (Type 2 connection) at a maximum rate of 11 kW, which is better than the previous 6.6 kW.

As for DC fast charging (CCS2 connection), peak power input has been increased from 40 kW to 50 kW, which Mazda says reduces the time taken to get from a 20-80% state of charge by 10 minutes to just 26 minutes instead of 36 minutes.

So, the MX-30’s AC and DC charging capabilities have been improved, but there’s a bit of a peculiarity with the latter. See, when the MX-30 was first announced, Mazda said in its release that the EV supported DC charging up to 50 kW. Subsequent local announcements in the United Kingdom and the US echoed the same thing, so the numbers are kind of odd. In any case, we’ll take Mazda’s word at face value for now and carry on. Before that, as a side note, the MX-30 that Bermaz Motor showed us in April supports 6.6 kW AC and 40 kW DC charging.

Besides the revised charging rates, the rest of the MX-30’s powertrain is otherwise unchanged. There’s still a 35.5-kWh lithium-ion battery that powers a front-mounted electric motor with 145 PS (143 hp or 107 kW) and 271 Nm of torque, and the range remains at around 199 km.

Other changes include further optimisation of the sound frequency emitted by the car’s “EV sound” system, which provides the driver with audible feedback tied in with throttle usage. Mazda says sound frequency has been set to 100-200 Hz – “the same as other sounds heard whilst the car is operational, such as the wheels and wind noise – so that drivers can recognize the amount of torque in a natural manner without any sense of the sound being unusual.” 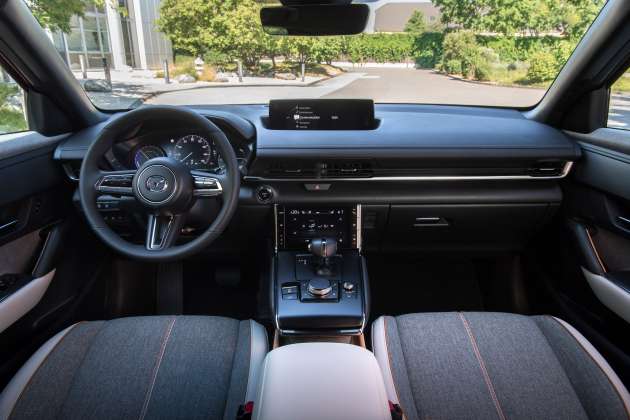 For 2022, the number of multi-tone colour schemes has been increased to four, with Jet Black and a new Zircon Sand (beige) being added to the list of options. Meanwhile, the interior gets three additional themes to choose from, including Modern Confidence (white leatherette with mélange fabric, orange stitching and natural cork) and Industrial Vintage (brown leatherette, denim coloured fabric and a darker coloured cork).

There’s also a new Urban Expression (all-black interior with grey and white accents for the denim fabric upholstery, dark brown cork console and door grip trim). Some of the seat fabrics use up to 20% recycled thread, keeping in line with Mazda’s approach to sustainability in vehicle production.

The MX-30’s design is unchanged from before, so you still get the rear, RX-8-style suicide doors, while the interior features a dual-screen setup for the centre console – upper 8.8-inch infotainment and lower seven-inch for climate controls. There’s also a windscreen-projected head-up display and another seven-inch screen acting as a digital instrument cluster.