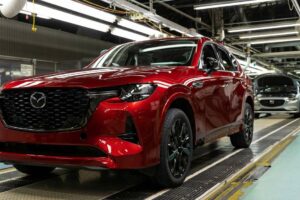 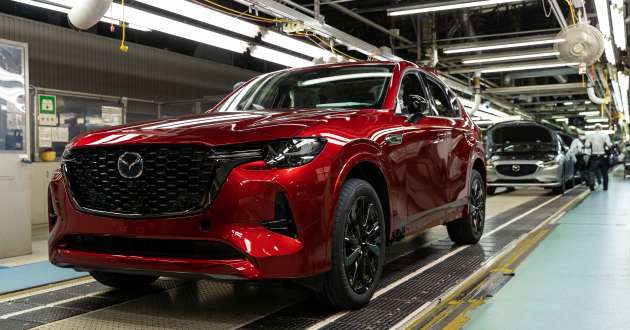 Mazda has officially begun mass production of the CX-60, which first made its global debut in March this year. The CX-60 Is one of five SUVs being added to the Japanese carmaker’s line-up over the next two years, with others being the CX-50 – revealed last November – as well as the upcoming CX-70, CX-80 and CX-90.

To commemorate the occasion, the company recently held a line-off ceremony at its Hofu Plant No. 2 in the Yamaguchi Prefecture where the CX-60 is produced alongside the Mazda 6 and CX-5. According to the carmaker, production of the CX-60 for the European market began on March 15, with the first shipment of cars set to depart for the continent from Nakanoseki port on April 26.

The CX-60 is Skyactiv Multi-Solution Scalable Architecture with a front-engine longitudinal layout and rear-wheel drive. In Europe, the CX-60 will be available as a plug-in hybrid – a first for Mazda – featuring a Skyactiv-G 2.5 litre naturally-aspirated four-cylinder petrol engine making 192 PS (189 hp or 141 kW) and 261 Nm of torque.

This is augmented by an electric motor rated at 136 PS (134 hp or 100 kW) and 250 Nm that sits between the engine and an eight-speed automatic transmission. The SUV also comes with Mazda’s i-Activ all-wheel drive system that enables shaft-driven transfer of torque between the axles, along with a 17.8-kWh lithium-ion battery that for up to 63 km of emissions-free driving at speeds of up to 100 km/h.

There’s also a mild hybrid version of the straight-six diesel engine called the e-Skyactiv D, which adds Mazda’s M Hybrid Boost 48-volt electrical system to deliver 254 PS (251 hp or 187 kW) and 550 Nm. Every engine for Japan is paired with an eight-speed automatic transmission as standard.