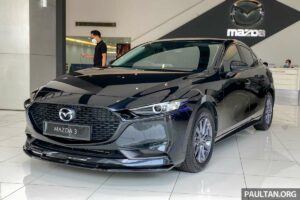 We recently came across this rather unique Mazda 3 being displayed at the Mazda Glenmarie showroom, which suggests that a Mazdasports package may be offered to customers. The Mazdasports name is not new here, as it is used for Mazda Malaysia’s advanced driving academy.

Before that, Bermaz Motor – the official distributor of Mazda vehicles here – applied it to an optional package that was offered to buyers of the previous, third-generation Mazda 3 Hatchback. Said package added several visual enhancements like a body kit, exhaust finishers, red accents as well as revised seats and steering wheel.

This Mazda 3 Sedan appears to follow the same approach, as it too gains additional body components like a front splitter, side skirts and a new rear apron featuring a diffuser-like element. Other differences from a regular model include a darkened grille surround instead of the usual chrome, prominent exhaust finishers and a small boot lid spoiler.

The lack of keyless entry and rear air vents indicate this to be the base variant of the Mazda 3 Sedan, which packs a Skyactiv-G 1.5 litre naturally-aspirated four-cylinder petrol engine (118 hp and 153 Nm), paired with a six-speed automatic transmission driving the front wheels.

Said variant is supposed to come with fabric seats, but this example has its seats trimmed in leather and suede instead. Suede is also used for the shift boot and the top portion of the steering wheel, while you’ll find “MS” branding on the backrests of the front seats.

We’ve checked and were told that these add-ons are currently not available for purchase and there’s still no confirmation if it will be offered in the future. Would you be interested to purchase them if they were officially sold through dealerships?