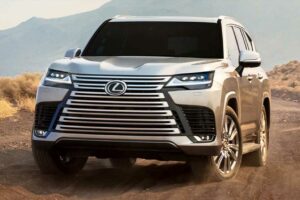 The one consolation prize in America’s loss of the legendary Toyota Land Cruiser—okay, maybe the only consolation prize—is that we will be sent the massively updated 2022 Lexus LX600 you see here. For most of the 26 years the LX has lumbered around, it has in effect been a Land Cruiser with fancier trimmings and a trick hydraulic suspension system. Both of those things are still true for the ’22 Lexus LX, but this new generation deviates farther from its Land Cruiser roots than ever before.

Far and away the biggest new additions to the LX family—besides a cleaner overall new look, aside from that gigantic grille—are the Ultra Luxury and F Sport trim levels. The former gets onboard with the Mercedes-Maybach-led trend of VIP rear seating, dropping the rear bench seat for two first-class captain’s chairs split by a special center console. The six-way power-adjustable chairs feature seven massage programs with five levels of intensity, all controlled by a touchscreen on the console.

For serious relaxation, the right rear passenger can even take control of the front passenger’s seat and electronically fold it forward against the dashboard (presuming no on is occupying said seat) for more leg room. In doing so, the rear seat entertainment screen mounted to the front seat back will tilt itself flat for a less-obstructed view of the road ahead. A footrest can be extended from the back of the front seat. Finally, the VIP can lay their seat back into a deeply reclined (but not quite lay down) position for a nap.

The rear console also features a wireless phone charger, power points, USB and headphone jacks, and a lid for the cupholders that doubles as a writing surface that is sprayed with self-healing paint to protect the finish. Manually deployed sunshades on the rear door windows manage sunshine entering the relaxation station, though we gotta ask: Why aren’t these shades power-operated?

Lexus made no mention of the third row in its press release, but photos and videos provided appear to show a cargo divider behind the second row in the Ultra Luxury model, suggesting the regular LX’s third-row seat is removed.

The F Sport treatment is more familiar, in keeping with the ubiquitous style- and (at-times) performance-enhancing F Sport trim level Lexus makes available on most of its vehicles. New to the LX, the F Sport trim brings a standard Torsen limited-slip rear differential and a new rear anti-roll bar, both engineered to enhance the SUV’s on-road handling. The standard Adaptive Variable Suspension electronically controlled dampers and electric power steering are retuned for sportier responses, too.

The rest of the package is aesthetic, starting with the 22-inch forged aluminum wheels and blacked-out mesh grille. Inside, the front seats offer more lateral support and the leather on the steering wheel and shifter are textured ostensibly for better grip but mostly for looks. A red interior color scheme is optional, as is a special white exterior paint color.

The Rest of the Interior

Regardless of trim level, front seat occupants will be treated to an entirely new dashboard design that finally doesn’t resemble a reskin of the Land Cruiser’s interior.

Far and away the attention-getter is the dual-screen setup on the center stack, with a seven-inch display embedded between the air vents and a 12.3-inch unit perched on top. A special LX take on the latest Lexus Interface infotainment system that debuted in the NX earlier this year, the system features an entirely new user interface that’s far simpler to use and quicker to respond than before; it also has the ability to accept over-the-air software updates.

Of course, Lexus would prefer you use its onboard digital assistant as much as possible rather than poking at screens. It can control the navigation, stereo, phone, and climate settings all with voice commands, using natural language and not just specific commands.

Because the whole system is connected to the cloud, you can set up your preferences once in the Lexus App and move your profile between different Lexus vehicles just by bringing your phone with you.

A third screen occupies most of the instrument cluster ahead of the driver, flanked by four analog gauges. The look changes with the different drive modes, which are new to the LX and include the self-explanatory Auto, Dirt, Sand, Mud, Deep Snow, and Rock. Controls for the drive modes and other critical off-road functions like suspension height, center differential lock, four-wheel drive selection, and off-road aids are all physical buttons, switches, and knobs next to or ahead of the shifter for easy no-look actuation while driving.

Opt for any trim besides Ultra Luxury and you’ll get a second-row bench seat and, we presume, a third-row bench that folds into the floor rather than against the sides of the cargo area like before. We say presume because Lexus makes no mention of the third row in its press release and provided no photos of the cargo area, so we’re forced to make an educated guess based on the latest Land Cruiser’s third-row seat setup. We can confirm, though, that the split-opening tailgate is gone, replaced with a one-piece liftgate like the Land Cruiser’s.

Under the skin, the new LX shares far, far more with the new 300-Series Land Cruiser. As always, the LX is a derivative of the Land Cruiser, so they share the same platform, now the Toyota GA-F architecture. These components are shared with the 2022 Toyota Tundra pickup and forthcoming Sequoia replacement, but are heavily focused on the needs of the Land Cruiser.

The LX shares its frame, drivetrain, and most of its suspension with the Land Cruiser. Up front, the Lexus again utilizes upper and lower control arms for its independent suspension. At the rear, a beefy live axle continues to be located by a four-link suspension. One LX exclusive? The Active Height Control hydraulic suspension, which offers four ground clearance settings starting with Low, for passenger entry and exit, then lifting to Normal, Hi1, and Hi2 for off-roading. Lexus says the system is faster-acting than before.

Lexus has not yet provided ground clearance figures for the new LX, but says key off-road metrics such as the approach, breakover, and departure angles “are maintained at the same level as the previous model,” which we take to mean they’re exactly the same. That would give LX pilots 8.9 inches of clearance and a 27.5-inch water fording capability to work with. Lexus frustratingly only provides approach, breakover, and departure angles for the old LX in the “Normal” height setting rather than the highest, so the 25/23/20-degree ratings are not indicative of its true capability.

Beyond the objective measurements, the LX’s capability is enhanced through a volley of small tweaks. Lexus claims slightly more rebound travel in the front and rear shocks for better ride quality on- and off-road. The Multi-Terrain Select system has been reprogrammed so it can be used in both four-high and four-low, not just the latter. Crawl Control, Toyota’s five-speed off-road cruise control, has been added, as has hill descent control and the Multi-Terrain Monitor system of exterior cameras that show not only a 360-degree view around the vehicle but also the ground directly below the engine and below the rear cargo area.

Out at the corners, 18- and 20-inch wheels are available, and a new brake-by-wire system has been implemented. Up front, the steering is now electrically boosted, allowing Lexus to add a number of contemporary active safety features including lane-keeping assistance, emergency steering assistance, and lane centering combined with cruise control.

Grouped under the banner of Lexus Safety System+ 2.5, active and passive safety systems also include forward collision warning and automatic emergency braking, lane departure warning, automatic high beams, road sign recognition, adaptive cruise control, and the ability to recognize and warn of oncoming vehicles when making a left turn. While not a safety feature per se, the LX’s claimed weight loss of 441 pounds should provide marginal safety and handling improvements—hey, safety features are great, but avoiding accidents altogether with safe evasive maneuvering is even better.

The V-6 is backed up by a 10-speed automatic transmission and a full-time four-wheel drive system with low range. While the Torsen center differential can be locked for a 50-50 power split front and rear, only the F Sport model includes a Torsen limited-slip rear differential. The transmission can be manually shifted by the steering wheel paddles.

Lexus has not announced fuel economy figures for this new powertrain, but we imagine they’ll be significantly better than the old V-8 model’s 12 mpg city, 16 mpg highway, and 14 mpg combined, though still not amazing in the context of a modern vehicle.

The company has also made no mention of other powertrains, but we think it’s highly likely a future LX600h-badged model will offer the hybrid powertrain that recently debuted on the new Tundra. That system places a 48-hp/184-lb-ft electric motor between the engine and the transmission’s torque converter, powered by a small nickel-metal hydride battery and increases total output to 437 hp and 583 lb-ft. It is extremely unlikely Lexus will offer the Land Cruiser’s diesel engine in the U.S.

When, and What Does It Cost?

Lexus is being cagey on two critical details. The 2022 Lexus LX600 will go on sale sometime in the first quarter of 2022. Pricing hasn’t been announced or even hinted at, but we imagine it’ll rise a bit from the current vehicle’s $88,275 starting price to account for all the new tech. The company has not said whether a two-row model will continue to be offered (aside from the Ultra Luxury trim), which could also impact the base price, as the third row currently adds $5,000 to the price on all models. If you were waiting for the new Land Cruiser to hit American shores, your wait is over—so long as you don’t mind a Lexus badge, that Lexus price, and that in-your-face, um, face.