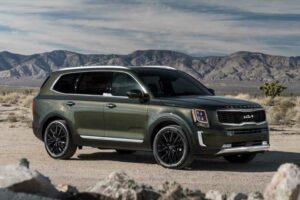 Pricing is a bit higher, too.

On June 14, leaked images claimed to show the 2022 Kia Telluride wearing a new grille. The photos also came with some inside information that basically pointed to more standard equipment for the popular SUV. Kia couldn’t confirm the info, but it may have been the catalyst in this unexpected debut for the 2022 Telluride.

For starters, don’t call this a facelift. Yes, the Telluride is distinctive for the 2022 model year, but as the leaked info indicated, visual changes are limited to the grille. The distinctive part is the Kia logo, which trades the old style for the snazzy new script but the grille itself is also slightly redesigned. Kia doesn’t say specifically how, but we know it adopts more of a mesh design. It also goes black for the full lineup, though some measure of brighter trim will endure on everything but the Nightfall Edition.

This lines up with the previously leaked information, but now we have pricing information to go along with it. As you’d expect, more standard equipment does mean a higher sticker price though it’s not a tremendous bump. The entry-level Telluride LX starts at $32,790, an increase of $600 from 2021. Similarly, the Telluride S also sees a $600 increase, starting at $35,290. The EX and SX only see a $200 increase to $37,790 and $42,690, respectfully. All prices are for front-wheel-drive models and don’t include a destination charge of $1,225, which is unchanged for the new model year.

Look for the 2022 Telluride to reach dealerships later this year.