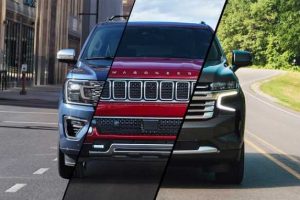 You might think that using “grand” as a descriptor means something is larger in size—but the new Jeep Grand Wagoneer is no longer, wider, or bigger in any dimension than the regular Wagoneer. It’s simply a more luxurious land-yacht-sized SUV. And while the Grand Waggy competes with blue-chip stuff such as the Lincoln Navigator and Cadillac Escalade, the not-quite-as-grand Wagoneer is aimed at mainstream large SUVs such as the Ford Expedition and the recently redesigned Chevy Tahoe.

Even though we haven’t had the chance to get behind the wheel of the new Wagoneer (or its Grander sibling), there’s already plenty of data we can dredge up and use to compare it with its American full-size competitors. Which SUV is the biggest? Which one has the most power? We parse all of this and more below, outlining how do the Wagoneer, Expedition, and Tahoe stack up on paper:

While both the Chevrolet Tahoe and the Jeep Wagoneer come with great big V-8s under their hoods (the Chevy’s optional diesel has no equivalent from the other two SUVs in this comparison), the Expedition can only be had with a twin-turbocharged V-6. That 3.5-liter twin-turbo Ecoboost V-6 makes a hearty 375 horsepower and 470 lb-ft of torque. Even though the EcoBoost carries the smallest displacement of any engine here, its snail-shaped lungs give it the most torque of the bunch. The Expedition and Tahoe both use versions of the same 10-speed automatic transmission that General Motors co-developed some years ago with Ford.

Output for the Jeep’s V-8 stands at 392 hp and 404 lb-ft of torque, putting it behind both of the Chevy’s engines and the Ford when it comes to power, and right near the bottom of this trio in terms of torque. We know that a Wagoneer 4xe plug-in hybrid is on the way, but we aren’t sure what kind of power it’ll make or whether it will bridge the gap between the current Wagoneer’s V-8 and the Chevy’s 6.2-liter V-8.

Wagoneer vs. Tahoe, Expedition: The Small Matter of Size

Look, the Wagoneer, Expedition, and Tahoe are not tiny. All three are similarly huge, with less than 5 inches separating their overall length measurements. The 214.7-inch long Jeep is longest, measuring 4.7 inches longer than the Expedition and 4 inches longer than the Chevrolet. It’s also the widest and the tallest of the group. However, despite its larger footprint, the Wagoneer is only the second largest of this group when it comes to interior dimensions.

Top cargo-space honors go to the Chevy, which offers the most maximum cargo room (so, behind the front seats, with the second and third rows folded) at 123 cubic feet. The Jeep offers a respectable 117 cubic feet of maximum cargo room behind the first row, but the Ford lags way behind, offering just 105 cubes of free air to work with. The gap shrinks when comparing the space behind the SUVs’ second and third rows, but the Tahoe mostly keeps its advantage over the other two even with its second- and third-row seats raised.

Wagoneer vs. Tahoe, Expedition: To Tow or Not to Tow?

Towing is one key reason why many buyers choose a full-size SUV over an otherwise similarly useful three-row midsize rig. After all, they are the perfect tool to haul you, your family, their stuff, and a boat the nearest lake. The new Jeep shines brighter than the others in this category. Despite its weaker horsepower and torque figures, the large Wagoneer can still tow more than the Tahoe and Expedition—a nice and even 10,000 pounds.

There’s plenty more to think about if you want a full-size SUV now that the Wagoneer has arrived on the scene. It’s newer, has a swanky interior, and revives a legendary name from the Jeep brand’s past. We’ll have to wait to get behind the wheel to tell you more about what the new Waggy is like, but it’s safe to say we’re excited to see how it stacks up in real life and not just on paper.