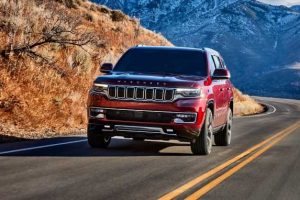 With a base price of $59,995, the 2022 Jeep Wagoneer enters the scene as either an expensive mainstream full-size SUV or a bargain-priced luxury one. We’re tempted to view the new Jeep as the latter. Although the base Wagoneer Series I’s sub-$60,000 starting sum undercuts the entry-level 2021 Cadillac Escalade and 2021 Lincoln Navigator by almost $17,500, it strikes us as a model intended to strictly serve as a price leader. Even so, we’re sure it’ll come reasonably well-equipped given it costs over $8,000 more than a base 2021 Chevrolet Tahoe and 2021 Ford Expedition, its more direct competitors.

A Series of Wagoneer Trim Levels

It seems Jeep hopes most consumers will skip past the Wagoneer Series I and drive off in the higher-end Series II model. At $69,995, the Series II just about matches the $70,445 cost of entry of the 2021 Infiniti QX80 (while still undercutting the Escalade and Navigator by thousands). Although Jeep’s yet to share the specific features the Wagoneer Series II adds over its lesser Series I sibling, the brand does note the trim comes standard with 20-inch wheels, a 10.1-inch infotainment system, tri-zone automatic climate control, and leather seating surfaces. Four-wheel-drive is available as a $3,000 option. Also, at launch, only the Series II and III will be available—the cheaper Series I goes on sale later.

Grand by Name, Grand by Reputation

If the Wagoneer Series III fails to entice you, then maybe the grander Grand Wagoneer might do the trick. Starting at $88,995 and available exclusively with four-wheel drive, the Grand Wagoneer brings a little more pizazz to the table by way of special styling cues, additional comfort and convenience features, and a more potent powertrain.

Whereas the Wagoneer relies on a 392-hp 5.7-liter V-8 for motivation, the Grand Wagoneer uses a 6.4-liter mill with 471 horses. Engine aside, making the move to the Grand Wagoneer scores kit such as a 12.0-inch infotainment screen, quad-zone automatic climate control, and a two-tone paint scheme.

Move up to the $95,995 Grand Wagoneer Series II and Jeep swaps the Series I’s 20-inch wheels and tires for a set of 22-inchers and adds features such as a camera-fed rearview mirror, and higher quality hides. Ready to cross the six-figure threshold? Then look no further than the $100,995 Grand Wagoneer Obsidian with its black-trimmed 22-inch wheels and less flashy fascia.

At the top of the Grand Wagoneer heap sits the $105,995 Series III. As the flagship trim, the Grand Wagoneer Series III sports a long list of standard equipment, including a camera-based rear-seat monitor, a night vision system, and a front-passenger infotainment display.

Look for the 2022 Jeep Wagoneer family to go on sale before the middle of the year, with the base Wagoneer Series I and six-figure Grand Wagoneer Obsidian arriving later in the year.