Home » Car Reviews » 2022 Jeep Grand Cherokee 4xe First Drive: This Is the One to Buy

2022 Jeep Grand Cherokee 4xe First Drive: This Is the One to Buy 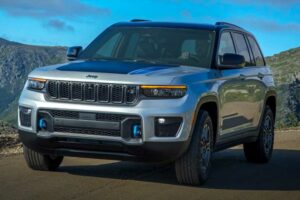 The 4xe throws down 375 hp and 470 lb-ft of torque, making it the Grand Cherokee lineup’s most powerful option, at least until the high-performance SRT models return wearing the new body. (The V-6 puts out 293 hp and 260 lb-ft; the V-8 357 hp and 390 lb-ft.) Nudging the next-most-efficient Grand Cherokee by 1 mpg (for 23 mpg) on the EPA’s combined cycle might not sound impressive, but that’s what you get if you never plug in and use the 4xe like a hybrid. If you plug it in (the whole point of a PHEV) and take advantage of its 25 miles of electric-only driving range, the EPA massively ups its combined figure to 56 mpg-e.

But wait, there’s far more complexity, too! The 4xe setup is anchored by a 2.0-liter turbo I-4 contributing 270 hp and 295 lb-ft, assisted by a 134-hp, 195-lb-ft traction motor that replaces the eight-speed automatic transmission’s torque converter, as well as a 44-hp, 39-lb-ft starter/generator motor that acts on the accessory drive pulley. Electricity is stored in a floor-mounted 17.3-kWh lithium-ion battery.

Two clutches manage the power-source distribution to the standard four-wheel-drive system in the three drive modes, closing in the Hybrid drive mode so the engine and traction motor work together. The starter/generator motor provides some assistance directly to the engine’s crankshaft via the drive pulley, so for the purposes of this clutch-action rundown, it’s part of the engine input.

In E-Save mode, the Grand Cherokee 4xe runs mostly like a hybrid, but it maintains the battery’s state of charge, sacrificing some fuel economy by favoring the engine where possible. In this mode, drivers can also select a target state of charge, and if the battery is below that level, the gas engine is used to charge up on the go. In certain instances—when stopped at a light, for example—the clutch linking the engine to the drivetrain will open, allowing the engine to rev a little and spin its drive pulley—and thus the starter/generator.

The all-electric mode is dubbed—surprise!—”Electric,” and it leaves the clutch to the engine open and closes the one for the larger electric motor. Because of the motor’s placement upstream of the transmission, you’ll feel the gearbox shifting up and down just like it does with the gas engine running. This is unusual among hybrids, which tend to utilize continuously variable automatic transmissions (CVTs) rather than clutches to blend their power sources, and it goes a long way toward keeping the Jeep from feeling flat-footed in its EV mode.

Charging is handled via a small door on the front-left fender. Capable of Level 2 charging, the Jeep can only accept charge rates of up to 7.2 kW. Even if you use a 19.2-kW level 2 charger—you’ll still only get 7.2 kW. Charge time on such a 240-volt Level 2 setup is about two hours. But given the size of the battery, a quicker charge rate would theoretically enable a full or close-to-full charge during, say, a grocery store run, thus allowing for more EV-only use. Use a 120-volt household outlet, and you face down about 12 hours of waiting.

Jeep partially atones for the charge-rate sin by integrating a handy array of lights atop the dashboard visible from outside the vehicle that give a simplified readout of the state of charge; if there is a problem with a charger, the lights will flash to offer a quick alert without the driver needing to reenter the car—or worse, find out later the SUV didn’t charge. And every time you turn off the Jeep, the gauge cluster can display estimated charge times on 240-volt and 120-volt sources, giving you a speedy hint of how long your SUV will need to be plugged in.

All this hardware is the same—at least on paper—as in the Wrangler 4xe introduced last year. In the Wrangler, the 4xe powertrain feels like a science experiment strapped to an oxcart. Sure, the 4xe is the quickest factory Wrangler this side of the V-8-powered 392, and it’s the most efficient, provided you rigorously plug it in (if you don’t, the heavy 4xe is one of the least efficient Wranglers). It also handles better than other Wranglers thanks to its low-mounted battery and wider axles from the Rubicon model.

Here’s another “but”: There is a lot happening between the 4xe’s transmission, those clutches, the engine, and the motors. It all goes very noticed in the Wrangler and relatively unnoticed in the Grand Cherokee. We suspect the simple fact the Grand Cherokee isn’t an oxcart with removable doors, roof panels, and a dearth of sound deadening gets some credit here, as does the standard active noise-cancellation feature.

Yet Jeep 4xe engineers made real progress since the Wrangler 4xe, putting the extra development time to good use. The powertrain is smoother, brake feel—particularly the handoff from the electric motor’s regen slowing effect to the mechanical brakes’ engagement at low speeds—is vastly improved. The electric-only mode is peppier than in the Wrangler, too, thanks in part to Jeep sending more power to the electric drive motor for an additional 14 lb-ft of torque, a not-insignificant 8 percent increase.

Where the Wrangler’s accelerator pedal responds recalcitrantly and non-linearly to inputs in Electric mode, the Grand Cherokee’s delivers a more natural ramp-up in acceleration. Jumping to 30 mph without pressing the accelerator hard enough to clear the kickdown detent and wake up the gas engine is easy, and although acceleration trails off above surface-street speeds, the transmission helps the motor build speed well enough that Electric mode doesn’t feel like a compromised afterthought. We made it just more than 21 miles in mixed driving before the Electric mode cut out; the battery meter reads “zero” when kicked, but the system preserves enough battery charge to power the hybrid side of things.

Power delivery is more cohesive with the gas engine and electric motors working together, though the clutches can still be caught out with abrupt changes in pedal inputs. Ditto stopping; in the Wrangler, the transmission downshifting, clutches opening to keep the engine from stalling, and regen-to-mechanical-brake handoff is an overlapping series of events you feel in shudders and odd pedal sensations at less than 10 mph or so. Engine noise, a persistent tinnitus in the Wrangler, is virtually nonexistent here; at idle the engine transmits a faint tremble to the steering wheel rim (if it’s on at all), and startups and shutdowns are seamless. Cruising at higher speeds, the gas engine is muted going on mute. Overall, you must pay close attention to the digital gauge cluster readout for the power splits to divine what, exactly, is taking place most of the time.

You will also want to pay close attention to any nearby fuzz when pressing hard on that accelerator pedal. Jeep claims the Grand Cherokee 4xe can hit 60 mph in 6.0 seconds with the engine and motors working together, making the 4xe quickest in the range. (Again, until the SRT model arrives sometime in the future.) At all speeds, the 4xe feels punchy, and the engine, motors, and transmission respond earnestly to accelerator pedal inputs.

The biggest surprise with the 4xe’s satisfying power is that it contends with the same near-half-ton weight penalty that plagues the plug-in Wrangler. More than 900 pounds separate the entry-level 4xe and an equivalent Grand Cherokee Limited with four-wheel drive and the V-6. That gap shrinks to around 500 pounds when comparing other 4xe models to their V-8-powered equivalents, but at between 5,325 pounds and 5,558 pounds—per Jeep’s figures—the 4xes are chubby no matter how you jiggle the numbers. For context, the weight penalty essentially erases the newest non-4xe Grand Cherokee’s inherent weight loss relative to the previous-generation SUV.

However, the heft you feel translates as solidity, not flab, and it is erased quickly when you press the accelerator and rocket forward. Where the powertrain shrugs off the extra mass (with the help of a shorter final-drive ratio), the chassis’ sharp steering response and planted cornering attitude give way to weighty anvil-gliding-across-syrup sensations on the freeway and while purring around town. With its standard steel springs or available air suspension, the Jeep rides like a Mercedes, and its stiff body absorbs whatever leftovers the suspension can’t handle like an ingot.

Combined with the new Grand Cherokee’s vastly improved, roomier interior and its lower beltline and thinner front pillars, the driving experience is luxurious bordering on Range Rover-esque. The only dent in the armor? Tire noise somehow penetrates the cabin at freeway speeds. You’ll barely hear a “whumpf” as a semi-truck passes going the opposite direction on a two-lane road, and wind noise is nonexistent—yet the tires sing like they’re at the Grammys, even through the white noise generated by the running engine.

At least the 4xe off-roads like a true Grand Cherokee. We humped across boulders in rural Texas in the off-road-oriented Trailhawk model-which gets the more aggressive QuadraDrive II 4×4 system, special all-terrain tires, extra skidplates, tow hooks, a different front bumper, an electronic-locking rear differential, and anti-roll bars that can decouple completely for extra wheel articulation—and it handled some of the same obstacles we tackled in a Wrangler 4xe during that 4×4’s launch last year. We even left the Grand Cherokee in Electric mode to see if it could keep up with the Gladiator pickup we followed over the trail. No sweat. All 4xes aren’t quite so outfitted but do get sealed batteries protected by a 1.1-inch-thick skidplate.

Now for the final, “But wait, there’s more!” Prices. Jeep is only selling the 4xe in Limited, Overland, Trailhawk, and Summit guises—midrange and higher in the normal Grand Cherokee lineup, which is available in more affordable Laredo and Altitude options. That puts the starting ask at $59,495; lay out the 4xe’s MSRPs alongside those of equivalent gas models, and they are five figures higher.

That gut check is softened by the $7,500 Federal EV tax credit the Jeep qualifies for, plus any local electric-car incentives. Jeep is putting its thumb on the scale, too, with attractive lease rates that effectively make the 4xe less expensive (in terms of monthly payment) than equivalent gas models. The 4xe is better equipped, too, with a standard digital gauge cluster, 10.0-inch Uconnect 5 central touchscreen, heated front and rear seats, leather-wrapped steering wheel, dual-zone A/C, and a full package of active safety features (automated emergency braking, adaptive cruise control, lane keep assist, and blind-spot monitoring). Fancier leathers and trim are available, too, as are a screen for the front seat passenger and each outboard rear passenger, plus additional options. In this era of high gas prices, plugging in the 4xe as much as possible and relying on EV mode might save you some dough, too.

The magic here is that you needn’t justify the 4xe as a plug-in hybrid to want one. Don’t ever plug it in? It doles out decent hybrid fuel economy: Beginning with a depleted battery, we saw around 25 mpg over 100-some miles of mixed driving. It’s satisfyingly quick. It delivers refined driving manners. Independently those are all compelling why-buys. The fact each aspect bests those of an equivalent gas-only Grand Cherokee tells you all you need to know: There is no need to wait, there is no more—this is now the two-row Grand Cherokee to get.