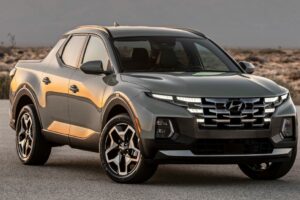 Revealed in April, the 2022 Hyundai Santa Cruz has started production at Hyundai Motor Manufacturing Alabama (HMMA) in the US. The “Sport Adventure Vehicle” joins the Sonata and Elantra sedans and Santa Fe and Tucson SUVs on the Montgomery assembly line.

This is the first time HMMA is making five models at once. Hyundai’s US factory recently completed an expansion project to support adding the Santa Cruz to its product mix. The compact truck will begin arriving in US dealerships later this summer, ahead of the just-revealed Ford Maverick, which will hit the road in the fall.

Both Santa Cruz and Maverick are unibody compact trucks, but couldn’t look more different. While the Ford is intentionally slab-sided and traditional looking (Ford’s F-Series truck has been America’s best-selling vehicle for close to four decades now), the Hyundai has plenty of creases and surfacing, just like the Tucson SUV it shares a platform with. It looks futuristic and super cool to these eyes – which do you prefer?

Hyundai’s truck comes with two 2.5 litre engine options, both paired with eight-speed automatics. The standard engine is a direct-injection naturally aspirated four-pot with an estimated 190+ hp and over 245 Nm of torque. This NA engine is paired with a conventional torque converter gearbox. There’s also a turbo option (estimated 275+ hp, over 420 Nm) with a dual-clutch gearbox and steering shift paddles.

Both NA and turbo 2.5L engines offer HTRAC all-wheel drive. The AWD is a multi-mode system, providing an electronic, variable-torque-split clutch with active torque control between the front and rear axles. The Sport setting gives a more agile feel by sending more torque to the rear wheels. Towing capacity is surprisingly strong for such a small truck – the Turbo AWD can pull 5,000 pounds (2,268 kg), which is more than the Jeep Gladiator Rubicon.

The dashboard is carried over from the Tucson, which means it’s a modern dual-cockpit design, but with the SUV’s gear selector buttons swapped for a traditional gear lever, which is fitting for a truck. More on the Santa Cruz here.