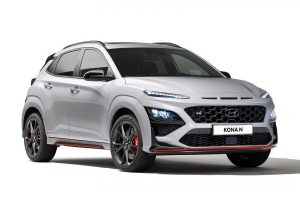 The company’s sportiest crossover takes much of its running gear from the Veloster N hot hatch.

After months of speculation and teasing, Hyundai finally pulled the silk sheet from the 2022 Kona N, the sportiest iteration of the company’s compact crossover. Borrowing its turbocharged 2.0-liter inline-four from the Veloster N, the Kona is also one of Hyundai’s most powerful SUVs ever, making 276 horsepower and 289 pound-feet (206 kilowatts and 392 newton-meters). As such, the automaker calls the Kona N its first “true hot SUV.”

In the US, the Kona N will likely exist in a class of one, but Hyundai still isn’t resting on its laurels. The small SUV also boasts a stiffened suspension, crisp-shifting eight-speed dual-clutch gearbox, and snappy new duds to set it apart from other members of the Kona family. And the automaker isn’t done tweaking its lineup for added verve. The hottest Kona will only be one of 18 different performance vehicles in Hyundai’s global lineup by the end of next year, joining the existing Veloster N; N Line variants of the Tucson, Kona, Elantra, and Sonata; the future Elantra N; and several unspecified projects.

The most obvious alteration between the Kona N and other trim levels is its powertrain. The aforementioned 2.0-liter four already appears in the Veloster N, where it exhibits plenty of low-end torque, minimal turbo lag, and a zesty exhaust note worthy of a performance car. It also makes 81 hp (60 kW) and 94 lb-ft (127 Nm) more than the turbocharged 1.6-liter four found in the Kona N Line and Limited trims. The company’s “N Grin Shift” temporary overboost punches power up to 286 ponies (213 kW) at the push of a button, perfect for launches or quick passes. Hyundai claims a 62-mile-per-hour sprint of 5.5 seconds, with a top speed of 149.

The Kona N will get an eight-speed wet-dual-clutch transmission (likely the one found in both the Sonata N Line and Veloster N), up one cog over the “dry” DCT that’s paired to the 1.6-liter. A manual transmission likely won’t be available in the Kona N, nor will all-wheel drive. That’s an odd choice given then Kona’s performance-SUV predilections, and four driven wheels would do wonders for the torque steer that sometimes rears its head in the Veloster N.

Even so, an electronic limited-slip front differential will help keep the SUV planted; ditto N-specific 19-inch forged aluminum wheels and Pirelli P-Zero tires. Higher-friction braking material and upsized brake rotors enhance stopping power; meanwhile, Hyundai also enhanced the Kona N’s body with added weld points and a reinforced skeleton, and the strut rings have been revised for added rigidity and less body roll in corners. Helping aid all-around performance is a curb weight of about 3,340 pounds, according to Hyundai – up only about 100 over a Veloster N.

Five drive modes (Eco, Normal, Sport, N, and Custom) will alter throttle mapping, traction and stability controls, steering weight, and exhaust sounds. We certainly hope the active exhaust in the Kona N sounds as snorting and rambunctious as that of the Veloster.

If you’re going through the trouble of getting the performance variant, you want it to look at least a little special, right? Hyundai agrees, which is why the 2022 Kona N will get significantly revised bodywork. Along with the facelifted Kona family’s new headlights, daytime running lamps, and taillights, the N model gets a reshaped front bumper with sharper grille textures and a new rear bumper with hilariously oversized twin exhaust outlets, leaving no question as to the SUV’s intentions.

A front lip spoiler and split rear wing atop the hatch provide added downforce, as do reshaped side skirts. The N–speciifc triangular third brake light recalls the Veloster, as do the smatterings of lower body red pinstriping that have become a family trait. Body-colored wheel arches, borrowed from the less aggressive Kona N Line, keep it all in the family. An aggressive wheel design suits the small SUV’s exuberant styling perfectly.

Inside, supportive-looking front bucket seats feature microfiber suede seat faces and faux leather inserts, looking as comfortable here as the similarly shaped seats of the Sonata N Line. As with every Hyundai performance product, the 2022 Kona N gets Performance Blue accents applied liberally throughout the interior, including the steering wheel–mounted drive mode selector, DCT gear selector, and cupholder rings. A chunky steering wheel and metal pedals look the part and should feel nice to use as well, and a hand-operated parking brake is a nice, old-school touch.

Like other 2022 Kona variants, the N gets a 10.0-inch digital instrument cluster, as well as an identically sized infotainment screen. What’s more, the performance model gets an “N Mode Design” feature that can communicate lap times or place the driver at a specific location on a circuit – presumably on pre-programmed racetracks. The system is designed to provide a gaming-like experience for the driver, which is an odd choice if you’re lucky enough to actually be on a track instead of just dreaming about it in Gran Turismo.

Direct competition will be thin on the ground, with a lower price and more exciting performance than the BMW X2, Mercedes-Benz GLA, and Jaguar E-Pace. As such, we hope the Hyundai Kona N inspires other mainstream automakers to produce sportier, sexier versions of their small crossovers – Volkswagen Taos GTI or Nissan Kicks Nismo, anyone?

The 2022 Hyundai Kona N will arrive on the market before the end of the year, with pricing a mystery at the moment. However, we presume it will cost more than the Veloster N and any other member of the compact crossover family. Figure a starting price of about $34,000, give or take a few grand.