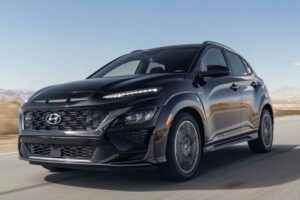 What are the uninitiated to make of the updated 2022 Hyundai Kona in new N Line trim? The subcompact SUV’s distinctive exterior is kind of cute, kind of funky and chunky, but not necessarily everyone’s cup of tea. As an N Line offering, it’s supposed to be sportier, and its size and fifth door have led some to consider the Kona to be something of a compact/subcompact hatchback instead of a small crossover SUV.

The 2022 Kona N Line features the range’s more powerful 1.6-liter turbocharged four-cylinder engine linked to an eight-speed twin-clutch automatic transmission, and our test vehicle has all-wheel drive. As for the N Line designation, that’s a reference to the brand’s “N” vehicles, like the Veloster N, the Elantra N, and, yes, the  Kona N, with N Line being a sort of stepping stone between the regular versions and the frenetic, high-performance full-N models. Those include the Elantra N Line, Sonata N Line, and more aggressively styled Tucson N Line, some of which receive power upgrades, and some of which don’t.

So, is the 2022 Kona N Line to be viewed as a performance hatch with a direct line that traces to Hyundai N performance machines? Or is it more like a baby Tucson N Line, which is to say an SUV that’s all show and no go? That’s one of the questions we hoped to answer through testing.

What the Numbers Say

The 2022 Kona N Line AWD’s performance shines greatest when it’s turning left or right at speed and not so much out of the gate or in a straight line. On our one-way lateral acceleration loop on the skidpad, it netted a result of 0.89 g on average. That compares favorably to subcompact SUVs like the less powerful segment-leading 2021 Subaru Crosstrek Sport, which maxed out at 0.79 g, and 2019 Honda HR-V Sport AWD, which was very close at 0.88 g. It’s also better than hatchbacks like the 2021 Mazda 3 AWD Turbo (0.79 g) and front-wheel-drive 2022 Honda Civic Sport Touring (0.88 g) but not unexpectedly trails thoroughbred performance models like the 2022 Volkswagen Golf R (0.94 g).

On our figure-eight assessment, the Kona N Line continued to impress, but with a caveat. “More grip than expected, but stubborn understeer on the limit,” road test editor Chris Walton said. “The only time AWD was evident was on the exit, where I could floor the throttle without wheelspin. Steering weight and precision are very good for this vehicle class. Sportier than most would expect.”

The Kona’s athleticism is less evident mashing the throttle from a standstill. Although its 195-hp turbo inline-four powertrain can get peppy, road test analyst Alan Lau noted it provided an unremarkable launch and the “drivetrain felt kind of lazy, too.” We recorded a best 0-60-mph time of 7.3 second for the Kona N Line and a quarter-mile time of 15.7 seconds at 91.5 mph.

Our test team found the Kona’s brakes to be effective and predictable, though pedal feel was a bit soft. Lau also experienced chassis “wiggle under hard braking, and not the sporty kind.”

The Kona N Line’s solid testing numbers translate to a fun time on the street, and our canyon drives were a hoot in the crossover. Although the suspension was a little stiff, ride and handling were good and body roll minimal, no doubt helped by the Kona’s multilink rear, comparatively low ride height, and forward and aft anti-roll bars. The grip in corners was particularly impressive, aided by AWD and standard 235-section tires that are notably wider than the 215s that come on the lesser SEL model and the 205s on the base Kona SE.

It wasn’t the swiftest in stoplight drag races. But the Kona N Line’s powertrain provided enough punch for passing on the freeway. Its seven-speed dual-clutch automatic transmission seemed quick enough and delivered almost instant throttle response. That you’re experiencing this satisfaction while sitting in an interior with plenty of hard plastic—some of it quite cheap feeling—seems a little incongruous, but overall, the Kona N Line’s interior is perfectly fine. Its design and layout are tasteful and logical. The front seats are comfortable enough. But wherever you are in the vehicle, there’s usually an unattractive plastic panel or two nearby.

But the feature set is decent; the Kona N Line has standard features such as a power driver’s seat, heated first row, and a leather-wrapped steering wheel and shift knob. Hyundai also added the available $2,500 Tech package to our Kona test vehicle, which includes, among other features, a power sunroof, eight-speaker premium audio (two more speakers than standard), automatic high-beams, and adaptive cruise control.

The cabin’s screens are appreciated for their size, both 10.3 inches, but only the digital instrument cluster is on every Kona N. (The standard infotainment touchscreen is 8.0 inches.) We also appreciate that Hyundai tried to sport up this Kona with splashes of red in the black-on-black cabin. But with its available sunroof, the Kona’s headroom is compromised in the back seat. The hinged armrest that covers the center console storage cubby is also positioned more as an elbow rest.

Indeed, space maximization is one of the Kona’s biggest letdowns. The room most shoppers are looking for in this class is usually for transporting small numbers of people or parcels. Even so, the five-passenger Kona is pretty tight inside. It offers less rear legroom than rivals like the 2022 Crosstrek and 2022 Honda HR-V and trails them in cargo space, as well. The Kona offers just 45.8 cubic feet of space with the rear seat folded, whereas both the Honda and Subaru provide more than 55 cubes. Behind the rear seat it’s more of the same, with even the Mazda 3 hatch delivering 20.1 cubic feet to the Kona’s 19.2.

A small car generally means a small fuel bill, and in that regard the 2022 Kona N Line is competitive. Rated at 27/32 mpg city/highway by the EPA, it offers slightly better fuel economy than 2022 versions of the 1.6-liter turbo Kia Seltos AWD, which rides on the same platform and shares a similar powertrain, and the 1.8-liter naturally aspirated inline-four HR-V AWD equipped with its CVT. From the hatchback world, it’s also better than both the turbo and non-turbo 2.5-liter Mazda 3 AWDs. The 2022 Crosstrek gets slightly better fuel economy regardless of powertrain, but both SUVs are down on power compared to the Kona N Line.

A comparable 2022 HR-V AWD could be the EX model, which has a sticker price of $27,795, but it doesn’t get the Hyundai’s leather-wrapped steering wheel and shift knob and comes with a smaller infotainment screen and fewer speakers. The same goes for the 2022 Crosstrek Sport. Even with the optional package that adds a moonroof, blind-spot monitoring (standard on the Kona N Line) and bigger touchscreen (still 2.0 inches smaller than our tester’s), for $29,770 you’re getting a manually adjusted driver’s seat, analog gauges, and fewer speakers than the Hyundai.

We have driven less engaging small cars than the 2022 Kona N Line and like how Hyundai has sharpened the performance on this subcompact SUV. It’s not a hot hatch by any stretch—not even close—but it’s also not boring. We said as much when we named an earlier version of this Kona generation a 2019 SUV of the Year finalist.

That’s a plus for a relatively affordable model that wears its cost savings on its sleeve. Yes, there is a ton of plain-looking plastic inside a cabin that’s small for its class. But the Kona N Line’s turbo powertrain is punchy, its chassis handles great, its equipment list is generous, and fuel economy is nothing to sneeze at. It’s these things that lead us to think this little Hyundai could make an ideal first car for a young enthusiast. While the Kona N Line doesn’t measure up to true performance compacts like the VW GTI/Golf R or Honda Civic Si/Type R, it provides enough heat to spice up most folks’ daily grind.