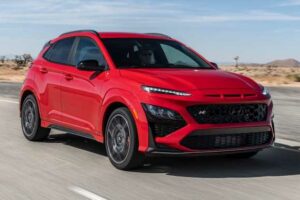 When you’re interested in performance cars, you want vehicles best engineered to deliver the most dynamic fun—and that means cars. We’re talking coupes, sedans, and hatchbacks, not tall, heavy, bulky SUVs. Weight is the enemy of performance, as is a high center of gravity. Most new car buyers today, though, want SUVs; as such, a new common ground has emerged in the form of the performance SUV. It’s not ideal, but this “solution” looks more and more like the future of factory-built performance. And if the 2022 Hyundai Kona N is any indication, the future doesn’t look nearly as bad as you might fear.

The reason: The Kona N is barely an SUV. Front-wheel-drive only and with just 1.1 inches of additional ground clearance compared to a Toyota Camry, the Hyundai Kona N is actually a high-ish-riding hot hatch. It’s a Veloster N for people who can’t do the three-door small hatchback thing and who want or need a bit more practicality and space.

That’s the trade-off you make here. Standing about 6.0 inches taller and 93 pounds heavier than the Veloster N, the Kona N gives you the SUV-like tall seating position people love and the ability to put five folks in the car without any hassle. Cargo space is effectively the same in both cars.

Those pounds and inches don’t sound like much, but they do make a material difference in the way the cars drive. The 2022 Hyundai Kona N is the slightly more mature, sophisticated machine of the two. That’s not to say it’s tame; it’s still a wild child, just not quite as wild as the Veloster N.

You feel it most in the Kona N’s composure. It feels planted, hunkered down on the road despite sitting 1.5 inches higher above it. Where the Veloster N feels light on its feet and tossable, the Hyundai Kona N is more serious. Chuck the Veloster N into a corner, and it rotates, sliding just a bit as the tires howl but don’t let go entirely. Not the Kona N. Its tires don’t squeal, and it doesn’t rotate. It digs its claws in and goes.

You don’t even need to be childish with the throttle to break the tires loose mid-corner. Hyundai’s electronically controlled N limited-slip differential is aggressive for a street car, transferring substantial power across the front axle to the outside tire. With 276 horsepower and 289 lb-ft of torque on tap and only the front wheels to take it, there’s a little torque steer, but more often what you feel is the diff doing its thing. Rather than fighting you, the tug through the steering wheel pulls you into the corner. Catch a big enough midcorner bump, and the diff will actually tighten up your line too much, which you correct by either muscling it or, heaven forbid, backing off the throttle slightly.

The power delivery also has its quirks. There’s obvious turbo lag below 2,500 rpm, and the boost hits old-school with a big surge just past 3,000. If it bothers you, shifting manually with the paddle shifters to a lower gear before you enter a corner keeps the revs up and the boost on, but honestly the lag can be a useful tool. Left to shift itself, the eight-speed dual-clutch gearbox will let the engine dig from 3,000 rpm even in its most aggressive shift program, and doing so affords you a beat to unwind the steering wheel before the boost hits. Done correctly, this allows you to get on the throttle super early in a corner knowing that by the time the boost hits, you’ll be exiting the bend and straightening the wheel. The diff can figure out the rest, and it will.

Absent an irritation with turbo lag, there’s no need to shift the transmission yourself. In its most aggressive setting, the gearbox makes excellent choices, and there’s more than enough midrange torque to get you out of even the tightest corners in whatever gear it chooses. Shifts are buttery smooth, unless you push the big, red “NGS” button on the steering wheel; it stands for “N Grin Shift.” Yes, really.

NGS activates an overboost function that buys you an extra 10 hp for 20 seconds, which you don’t feel in the seat of your pants. It also bangs the shifts just a little to make it feel like you’re really beating on the car. The function is generally only useful when you want every last pony, mainly when drag racing or coming off a corner onto a long straight. The button itself is located awkwardly at the four o’clock position, requiring you to move your right hand down the wheel and stretch your thumb out. It’s rarely worth the effort.

The buttons you do want to push are the N paddles just below the horizontal steering wheel spokes. In fact, the very first thing you should do when you buy a Kona N (or a Veloster N) is take the car to your favorite road, push the right paddle (which is N Standard mode and Custom 1; the left paddle is for Normal mode and Custom 2), and start playing with the customizable settings.

If your favorite road is anything other than a racetrack, N Standard mode is going to be way too stiff in terms of the suspension. Like in the Veloster N, we prefer the Kona N’s electronically adjustable shocks in their softest setting. Anything else will have you bouncing around like the seats were replaced with trampolines. The body control is excellent regardless of shock stiffness, so there’s no need to torture yourself.

Similarly, we prefer the lightest steering setting, as the heavier, supposedly sportier settings mostly make you work more for a minimal increase in road feel, which is already excellent for a high-powered front-drive car with electric power steering. Turn-in is sharp, though again not quite as razor’s edge as the Veloster N’s, and the ratio is appropriately quick, so you never have to take your hands away from nine and three to make a corner, no matter how tight.

The brakes require a likewise gentle touch. They’re sensitive but not Veloster N touchy. They deliver a lot of initial bite, but it’s easier to modulate and easier to get used to. The big discs are steel, but you really have to try to fade them on the street. Hours of hard driving on excellent mountain roads couldn’t put a dent in them. It helps that you only really have to use them for tight corners, as the composure we mentioned earlier allows you to carry a ton of cornering speed and use the brakes mostly to transfer weight forward as needed.

When you do get into them hard, it’s reassuring to know they aren’t phased by bumpy braking zones. It’s the only time you’ll hear the tires chirp (aside from doing a burnout), but the ABS has zero issues stopping the car hard even when the surface isn’t smooth.

Unless you live in one of those swanky trackside villas, at some point you’ll need to drive home in real-world traffic, and this is where the 2022 Hyundai Kona N really justifies itself. Set to its normal drive mode, the Kona N can easily be your primary car. It rides stiffly, sure, but no more so than any other performance car you might cross shop. The throttle programming backs way off, allowing you to behave like an adult when you want to rather than ripping away from every stop. The exhaust quiets down to a mildly sporty murmur, and the car becomes a sporty crossover, not a track machine.

Whichever personality you want, it’s hard to make a case for any of the Hyundai Kona N’s competitors. You already picked this over the Veloster N because you want a small SUV, not a traditional hatchback, and there’s almost no competition in this space. The Kona N will run circles around a Mini Clubman JCW or Countryman JCW, and it’ll stand up to a Mercedes-AMG GLA45 for probably about $20,000 less. (Hyundai hasn’t announced pricing, but a Veloster N starts at $33,245 and a GLA45 at $55,500.) Unless you absolutely need to have the three-pointed star on your car, you won’t miss anything buying the Hyundai.

That’s what makes the 2022 Hyundai Kona N great: It’s a hell of a performance bargain, it rips around more like a hot hatch than a fast SUV, and it satisfies any concerns you have about the wisdom of buying a Veloster N as your only car. It might not be the ideal performance car formula on paper, but when you’re behind the wheel, we dare you to care.