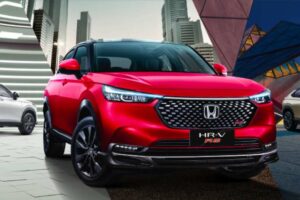 The 2022 Honda HR-V has launched in Indonesia in four variants; three are specified with the 1.5 litre petrol naturally aspirated VTEC engine producing 121 PS and 145 Nm torque, while the fourth, range-topping version is equipped with a 1.5 litre VTEC Turbo producing 177 PS and 240 Nm of torque. Both engines are mated to a continuously variable transmission.

This contrasts against the HR-V launched in Thailand, where the B-segment crossover has gone on sale as an e:HEV hybrid. This features a 1.5 litre Atkinson-cycle engine rated at 105 hp and 127 Nm of torque from 4,500 rpm to 5,000 rpm, and is combined with two electric motors powered by a lithium-ion battery. Total system output for the Thai-market HR-V is 131 hp and 253 Nm.

Kicking off proceedings for the HR-V range in Indonesia is the HR-V S variant at 355.9 million rupiah (RM104,738), which starts with the Honda Sensing suite of driver assistance systems. Exterior equipment on the S variant is comprised of full-LED headlamps with LED DRLs and 17-inch alloy wheels, while inside the HR-V S provides a 4.2-inch TFT instrument cluster as well as a seven-inch touchscren display audio head unit with smartphone connectivity and a four-speaker setup. 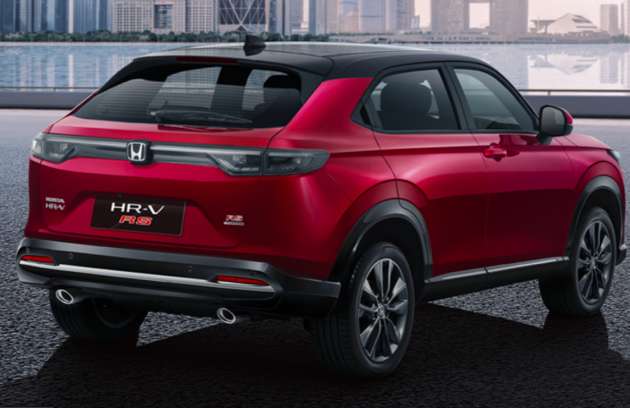 Next up at 379.9 million rupiah (RM111,798) is the HR-V E, which packs the base equipment specification of the HR-V S, and adds remote engine start, painted foglamp and front bumper garnish, shift paddles, auto-folding exterior mirrors with LED turn signals, and a second-row power outlet.

Inside the HR-V E, leather-fabric upholstery is applied to its Combi seats, and is joined by a part-leather trim for the steering wheel and a leather gear shift knob. Rear seat occupants additionally get air-conditioning vents as well as a rear seat armrest with cupholders.

Another level up is the HR-V E SE, priced at 399.9 million rupiah (RM117,701). Here, the SE variant packs the equipment of the E, and to which it adds sequential turn signals, a panoramic glass roof, LED fog lamps, and 18-inch alloy wheels.

Topping the 2022 HR-V range for Indonesia is the HR-V Turbo RS, at 499.9 million rupiah (RM147,070). In addition to the headlining 177 PS/240 Nm 1.5 litre turbocharged engine, the Turbo RS is visual identified by its RS bodykit and dual exhaust pipe outlets.

Instrumentation for the driver in the Turbo RS variant is a seven-inch TFT cluster with customisable display settings, while audio comes courtesy of a four-speaker setup joined by two tweeters. The driver gets to choose from three drive modes – Sport, Normal and Econ, while further conveniences in the Turbo RS include a hands-free powered tailgate with walk-away closing function. Passive safety equipment includes six airbags.

The 2022 Honda HR-V has been sighted on Malaysian roads last month, and Honda Malaysia has stated that all-new models it has planned for the Malaysian market will comes with VTEC Turbo as well as e-HEV hybrid powertrains; also confirmed is the Honda Sensing driver assistance suite. This B-segment crossover will be one of two all-new model introductions slated for our market this year, with the other being the BR-V.