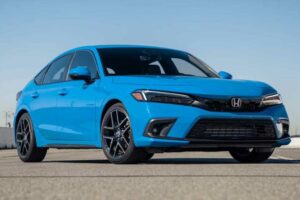 The 11th-generation Honda Civic Hatchback trades the weirdly angular, trying-too-hard-to-be-cool look for a more mellow and refined body design. Like a serious suit-wearing executive who loosens up on the weekend in jeans and a T-shirt, the latest Civic hatch exhibits a new laid-back temperament in a shrinking segment endangered by SUVs and crossovers. We recently grabbed a 2022 Honda Civic Sport Touring Hatchback (wearing the brightest blue paint our eyes could tolerate) for a week’s worth of evaluation, including our full MotorTrend testing regimen, and it demonstrated once again why the latest Civic is so darn good.

Our test vehicle arrived with only one option, the Civic-exclusive Morning Mist Blue Metallic paint, and an as-tested price of $30,815. This hatchback was a continuously variable automatic transmission (CVT) model powered by the trusty 1.5-liter turbo inline-four that makes 180 horsepower and 177 lb-ft of torque.

In our numbers testing, the 2022 Honda Civic Sport Touring Hatchback accelerated to 60 mph in 7.7 seconds; the Civic Touring sedan we tested previously did so in 7.4 seconds, and the manual-transmission hatchback in the same 7.7. When it came to the quarter mile, the Civic Hatchback logged 15.9 seconds at 89.8 mph; the sedan made the same run in 15.7 seconds at 91.4 mph. The manual hatch opens a lead over its CVT sibling by that point, crossing the quarter-mile mark in 15.7 at 88.9 mph. As another comparison, the 2021 Toyota Corolla XSE Apex we tested hit 60 mph in 8.8 seconds and completed the quarter-mile test in 16.7 seconds at 85.5 mph.

On the street, we were delighted by how briskly a hatchback of this size and modest power drove in notoriously congested Los Angeles traffic; more specifically, how it managed to maneuver past the rolling roadblocks so effortlessly. In Sport mode, the 2022 Honda Civic Hatchback feels anxious to get up and go, and it’s surefooted handling was a delight when the roads opened up. And when driving conditions slowed down out of the blue, as is typical in L.A., hitting the brakes delivered smooth and effective stopping power.

Overall, the Civic Hatchback is a rewarding, fun little car to drive, with an engaging character and more capable dynamics than some might expect. The engine is torquey, the brakes are good, and the steering has some talkativeness. We were also pleased with the amount of grip the tires and chassis provided.

Living with the 2022 Honda Civic Sport Touring Hatchback came as natural as hitting the snooze button in the morning. It made commuting in the rat race seem not so bad as we steered the smooth operator onto several poorly maintained roads around L.A.; our butts and lower backs appreciated the top-notch ride quality. We liked putting the Civic through tight turns and having a bit of fun as we entered and exited winding freeway ramps.

One pesky feature to note, however, is included in the Honda Sensing package: The collision warning sounded repeatedly at the slightest detection of the Civic getting close to the rear of another vehicle. We’re not talking inches here, either.

The new 2022 Honda Civic’s cabin feel notably spacious, and at the $30,000 price point Honda did a spectacular job to produce a modern, upscale-looking interior. The seats are comfortable, and every button and control knob feels well-made. The honeycomb-style trim on the dashboard is a lovely bit of design and character on a consumer-friendly level. The sound the climate-control knobs produce when you adjust the temperature would make an excellent ASMR video.

We also think it’s neat how almost every inch of the infotainment screen is functional. For example, if you touch the time in the top right corner, it pulls up the Clock Faces menu; our favorite was the astronaut waving hi. You can also upload your own images to use as themes. Standard equipment includes leather-trimmed seats, a 9.0-inch touchscreen, a wireless phone charger, the Honda Sensing safety package, and both wireless Apple CarPlay and Android Auto.

The all-new 2022 Honda Civic Sport Touring Hatchback is an absolute buy for anyone who finds it fits their lifestyle needs. After our latest round of testing and real-world driving, it’s easy to say the new Civic’s dominance is well confirmed.