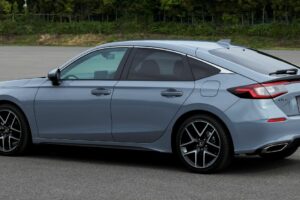 Two months after the 11th-generation Civic made its debut in sedan form, Honda has pulled the covers off the hatchback variant. This is the first body style that has been confirmed for markets outside of the United States, with the five-door being the only available option for Japan and Europe – although the sedan will almost certainly remain the default choice for the ASEAN region.

Design-wise, the hatch builds on the more mature design of the sedan but with a few tweaks beyond the truncated rear. The front end with its slim LED headlights and aggressive triple air intakes is similar, but there’s also a larger concave grille that is exclusive to the hatch, replete with a hexagonal mesh in lieu of the sedan’s horizontal slats. The body-coloured bar above the grille is slimmer as a result.

Along the side, the longer bonnet and the distinctive chrome window strip that extends into the C-pillars have been retained. However, the strong shoulder line now leads into a rear end that is 125 mm shorter than the sedan’s, along with a full-width taillight design that integrates the third brake light. The rear windscreen has also been made larger to improve rear visibility, ditching the split design of the outgoing model. Meanwhile, the lightweight composite hatch and the more outwards positioning of the hinges have allowed the top of the tailgate to sit 50 mm lower, creating a sleeker roofline without compromising rear headroom. Rounding off the sportier look are the large twin trapezoidal tailpipes and a black rear diffuser.

Inside, the hatch shares the sedan’s new Audi-like dashboard, featuring a freestanding seven- or nine-inch infotainment touchscreen, an available 10.2-inch digital instrument cluster, a hexagonal metal mesh covering for the full-width air vents and the use of more premium soft-touch materials and tactile switchgear.

Larger rear side windows, including a new quarter light window, make for a more airy feel for passengers at the back – who also enjoy 35 mm of extra legroom. Boot space has yet to be confirmed, but Honda says the tailgate opening is now 40 mm wider to make it easier to load items in. The hatch also retains a 60:40 split-folding rear seats and the outgoing model’s novel side-pull cargo cover. As per the sedan, the hatch is offered with the full suite of Honda Sensing driver assists, upgraded with a new Traffic Jam Assist (TJA) Level 2 semi-autonomous driving system that incorporates smoother, more natural responses from the adaptive cruise control and lane centring assist. In Japan, the Civic is also offered with an Adaptive Driving Beam (ADB) function that blocks off certain parts of the high beam to avoid dazzling other road users – the first time Honda is using such a system.

Both engines are fitted as standard with a CVT, but this time around, only the hatch gets the option of a six-speed manual gearbox. Honda has also confirmed that it will introduce a new e:HEV hybrid (the only powertrain option to be made available in Europe, in line with the company’s promise to offer a fully electrified lineup) and a high-performance Type R next year.