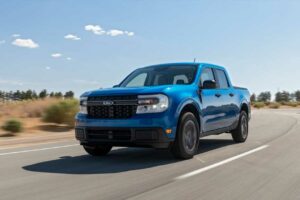 Back in the day, a truck was a truck, built solely for work. Body-on-frame, burly, able to haul horses and hay without breaking a sweat. Right? Given the intense one-upmanship in the half-ton pickup space, and the equally impressive size and capabilities of the “mid-sizers,” you’d be forgiven for thinking this has continued to be the case. But utility has always been a spectrum, and we once were offered smaller pickups in a variety of shapes and sizes that paired surprising payload capabilities with great affordability. The compact truck is back, and its name is Maverick—and the way the 2022 Ford Maverick hybrid’s “base” powertrain behaved in our testing should make you sit up and rethink all your assumptions about what a pickup can and should be.

If there’s only one thing you take away from this first test, it’s that the 2.5-liter I-4 and permanent-magnet electric motors are more than up to the challenge of the work this truck will be asked to do. It even pulled a light trailer with shocking confidence and ease. And the planetary continuously variable transmission is no buzzkill, either, providing smooth and linear power delivery that enabled the little truck to post some solid test numbers.

We’ll get to those numbers in a second, but we should also highlight something the numbers can’t capture: the Maverick Hybrid’s charisma. The version we tested was an XLT trim, one step up from the base model, and it featured a fantastic mix of interior materials that added to its puckish charm. The seats were done up in an attractive and premium-feeling two-tone textile, which worked well with a restrained use of bright orange interior accents to give the small truck a serious but playful appeal. Where the Maverick really shines is how Ford used smart design, especially texture and color, to make what would normally be hard, nasty grained plastic into something you actually want to look at and touch. Every single one of the many editors who have driven a Maverick raved about the colors, textures, and overall design—and, for those inclined to the practical, its grip of cubbies, water bottle cut-outs, and FITS slots. It’s this attention to detail, making an inexpensive truck’s interior something to enjoy rather than something just to accept, that is perhaps the truck’s biggest triumph. It’s also the same philosophy Ford applied to the Maverick’s bed, too.

You can apply that concept of enjoyment to the powertrain, too. It’s a smooth, enthusiastic setup, and there’s power if you call for it. But it also returns fantastic fuel economy. Ford had promised 40 mpg in the city initially, but in EPA testing it actually beat this estimate, earning official ratings of 42 mpg city, 33 mpg highway, and 37 mpg combined. In our testing, during which we towed a small trailer up a long freeway grade and attacked a twisty country road repeatedly, we observed about 30 mpg combined.

How Quick Is the 2022 Ford Maverick Hybrid?

Our Maverick Hybrid, which you should recall is only available with front-wheel drive, is no sprinter. But for a 3,694-pound pickup with a hybrid powertrain, its 0-60 mph time of 7.6 seconds is more than adequate, putting it right on par with your average modern crossover SUV or compact car. And subjectively, every editor that drove this little truck remarked on its surprisingly strong, linear power delivery. The important thing is that the Maverick Hybrid produced strong thrust, only starting to wheeze when passing north of 65 or 70 mph.

More important, despite lacking the traction advantages of all-wheel drive, it was only 0.6 second behind the much more powerful 2.0-liter turbocharged Maverick FX4 we also tested. It braked better than its non-hybrid counterpart, too, managing to stop from 60 mph in 119 feet.

How Does the 2022 Ford Maverick Hybrid Ride and Handle?

Zero to 60 mph times are not a yardstick for fun, but a handling loop is, and we made sure to sample the Maverick Hybrid not only in the day-to-day grind but also on the kinds of twisty roads we dream of. It’s out there on real pavement, over rough surfaces and in tight, winding corners, that the Maverick’s ace attribute comes out: the suspension.

Body control isn’t something pickups are known for, but the Maverick Hybrid shows a poise and sharpness that, frankly, raises the bar. Every turn of the wheel results in a deft, fluid weight transfer, with the truck settling down instantly. The damping is superb, with the Maverick Hybrid soaking up both large bumps and sharp, short-frequency ones with equal grace. Body roll is minimal, as is jostling of the occupants. It still feels like a truck, just a truck with superbly tuned suspension. And, it should be mentioned, our non-hybrid Maverick (an FX4 AWD) rode and handled well, but didn’t quite have the final ride quality special sauce of the Hybrid.

Can the 2022 Ford Maverick Hybrid Do Truck Stuff?

Long story short: Yes. Payload capacity is a useful 1,500 pounds for both the Hybrid we tested and the 2.0-liter turbocharged engine; drivetrain doesn’t make a difference. That’s right in the ballpark of the least capable full-size pickup payload figures, as well as most of the midsize truck segment.

Towing is more modest, but on par with that of many crossovers and wagons: 2,000 pounds. Opt for the 2.0-liter turbo powertrain and you can increase that to 4,000 pounds with an optional package, but the hybrid is stuck with the base tow rating. In our testing, we hooked up a light trailer with some ballast, ringing in at about 1,500 pounds. Pointing the Maverick Hybrid and the trailer up a grade, the little blue truck hardly broke a sweat. Power proved adequate, allowing slow but acceptable passing uphill. And the Maverick’s awesome damping helped impart extra confidence in how it tames a load and resists being shunted around by the trailer. For the sort of occasional “in-a-pinch” towing duties you could imagine a Maverick Hybrid owner using the truck for (a small sailboat, personal watercraft, or small load of building materials), this Ford is perfectly up to the task.

So, the plucky Maverick Hybrid can do truck stuff. It looks like a truck—certainly more so than the attractive but less conventional Hyundai Santa Cruz—and is really great to drive and use thanks to its thoughtful design, smart interior, and fantastic road manners. We feared that, perhaps, the “base” powertrain would be a drag, but in fact the smooth power delivery and EPA (and observed) fuel economy numbers are hugely impressive. The Maverick Hybrid isn’t a so-so version of an affordable truck—it might be the one to get, full stop.

You get the same powertrain, the same capability, and the same economy (with fewer niceties) in the base XL trim, which has an MSRP of $21,490. That said, most Maverick Hybrid buyers will step up to at least the XLT trim to get features most folks want, like cruise control. And just by polling the pool of editors who’ve driven the Maverick, we think an all-wheel-drive option would entice a lot more buyers to go hybrid—especially given the truck’s trouble getting traction when we put it on a sandy hill (which it nevertheless still conquered). Minor gripes about seat comfort and a desire for a skosh more linearity to the brake pedal can’t overshadow the fundamental goodness here.

Ford has created something great in the Maverick compact truck, infusing it with a coolness, an X-factor that makes this bargain hybrid pickup a standout we actually want to drive. It’s a vehicle that should make some legacy midsize pickups awfully nervous—and a legion of owners deeply satisfied.