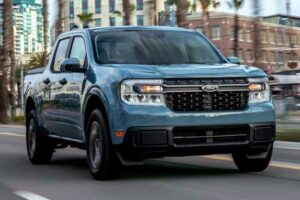 The 2022 Ford Maverick might be the Blue Oval’s smallest truck, but it’s still a big deal. It presents a tantalizing alternative to the doldrum of cheap SUVs and giant pickups we see endlessly patrolling our roads without resorting to outlandish styling or garish gimmicks. It’s a small truck for people who don’t need or want a half-ton in their driveway.

It’s priced for the everyman, too. With a starting sum of $21,490, it undercuts the cheapest F-150 by almost $10,000. It is also more than $5,000 cheaper than a base Ranger. It’s also the cheapest new pickup, period. But it’s not like this unibody trucklet is short on capability. Despite its smaller stature, the Maverick can still haul up to 1,500 pounds in the bed and tow up to 4,000 pounds with the 4K Tow option selected.

That $21,490 price is just for the base XL, and though there will be more than just one trim for the Maverick, the pricing for the other trims will come out later. The Maverick XL looks like a work truck. It comes with steel wheels, blacked-out mirror caps, and comes with the option for the 4K tow package. It also gets niceties such as LED headlamps, an 8.0-inch infotainment display, a rearview camera, and all the added utility of that 4.5-foot long bed.

The higher-spec Maverick XLT receives a host of upgrades, including a set of 17-inch alloys in place of the XL’s steelies, an available FX4 off-road pack, and Ford’s Flexbed storage setup. The Maverick Lariat serves as the truck’s flagship trim and it gets a leather steering wheel, Ford’s so-called “ActiveX” seat material, dual rear USB ports, and an available Bang and Olufsen sound system. Like the XLT, the Maverick XLT is also available with the FX4 off-road package.

Base Mavericks are motivated by a 191-hp gasoline-electric hybrid powertrain made up of a 2.5-liter I-4 and an electric motor that pushes power to the front wheels. Uprated Mavs get the 250-hp turbocharged 2.0-liter four-cylinder out of the Bronco Sport Badlands. The forced induction four shoots its power to all four wheels. The Maverick’s only true rival, the Hyundai Santa Cruz, is powered by a 2.5-liter I-4 engine good for 191 hp. Should you need a little more grunt, there is an optional 2.5-liter I-4 engine with 281 hp.

We still don’t know how much the Santa Cruz will cost, but it’ll have to be pretty well-priced to compete with the cheapest Maverick. It should be a good fight between the two compact pickups, but at the end of the day, we’re just happy both are here.