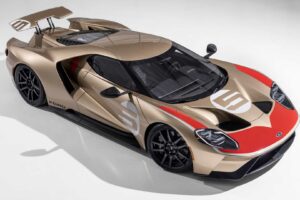 There have been eight Ford GT Heritage Edition models since the iconic Blue Oval supercar arrived in 2005. The first came in 2006, bringing the famous blue and orange Gulf livery to the first-generation car. The rest have graced the second-generation GT, and now we come to number nine, the last in the series. Say hello to the 2022 Ford GT Holman Moody Heritage Edition.

As with previous heritage models, this one pays homage to the GT40’s racing history. Every auto enthusiast knows about Ford beating Ferrari at Le Mans in 1966, crossing the finish line in a 1-2-3 formation to sweep the podium. Much attention has been given to Bruce McLaren and Ken Miles, who infamously finished side-by-side as part of the Shelby-American racing team. The Mk II GT40 in third place was driven by Ronnie Bucknum with the Holman Moody team, wearing a gold exterior with flashes of red at the front. That’s the racing livery recreated for this 2022 Ford GT, right down the no. 5 roundel on the hood and doors. 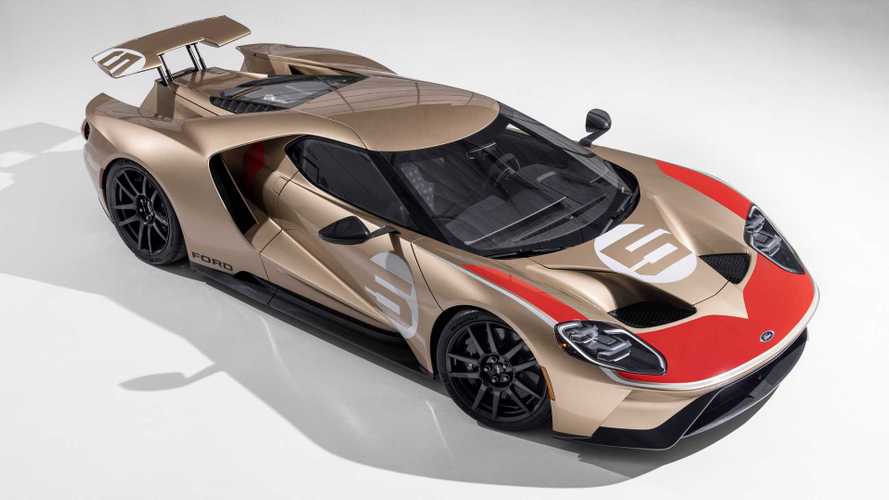 In addition to eye-catching colors, the Holman Moody Heritage Edition also features exposed carbon fiber in various locations. The 20-inch wheels are arguably the most prominent, but you’ll find carbon fiber on the front splitter, engine louvers, rear diffuser, side sills, and side mirrors. There’s more carbon fiber inside on the door sills, console, and registers. The rest of the interior is standard-issue Ford GT with plenty of leather and Alcantara, though you will find a bit of gold trim as a reminder of its Holman Moody connection.

Ford will debut the 2022 GT Holman Moody Heritage Edition to the public at the 2022 New York Auto Show, joined by the original 1966 Ford GT40 Mk II on which it’s based. Production is said to be ultra-limited – a number hasn’t been offered but every second-gen Ford GT heritage run thus far has been 50 or less. Overall Ford GT production is expected to end in December with 1,350 vehicles built all total.