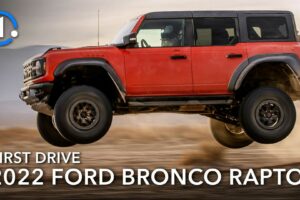 As a narrow, mountain-focused off-roader that rivals the Jeep Wrangler, the Ford Bronco isn’t a natural base to create something with the talent to go flat out across the desert floor, instead built for narrow rock crawls and forest trails. But Ford points out that desert racing is in the Bronco’s blood, with historical vehicles like Parnelli Jones and Bill Stroppe’s “Big Oly” dominating the Baja 1000 in 1969.

Rest easy, Blue Oval fans. Big Oly’s reputation remains unscathed in its spiritual successor, the 2022 Ford Bronco Raptor. The off-road family’s new flagship borrows liberally from the Ford parts bin, combining the high-speed prowess of the F-150 Raptor with the four-door Bronco’s relatively short wheelbase, turning it into an impressively multifaceted off-roader. Ford likes to refer to the 2022 Bronco Raptor as an Ultra4 racer for the road, and over the course of two days of difficult off-roading and a surprisingly curvy street drive, I found that metaphor hard to refute.

A vehicle’s verdict is relative only to its own segment and not the new-vehicle market as a whole. For more on how Motor1.com rates cars, click here.

There are some obvious external differences between the Bronco Raptor and its less aggressive ilk. A functional vented hood helps reduce ambient temperatures in the engine bay, and sheet-molded composite front and rear fenders have a more bulbous appearance while also widening the bodywork to cover the Raptor’s broader stance relative to the base Bronco. The Raptor badges front and rear pair with a bold “FORD” grille with amber lights – mandatory given its 85.7-inch width – and the stylized-B taillights stick out further to provide better visibility around the full-size, 37-inch spare tire.

But as muscular as the Ford appears, those styling alterations hide genuine engineering improvements. The most headline-grabbing of these is probably its new, twin-turbocharged 3.0-liter V6 that makes a prodigious 418 horsepower and 440 pound-feet. That V8-rivaling grunt routes through a 10-speed automatic gearbox to a part/full-time four-wheel-drive transfer case with a rock-friendly 3.06:1 low range. Like the 3.5-liter EcoBoost in the F-150 Raptor, the bucking Bronc’s 3.0-liter has a wide, flat torque curve that comes online after a brief bit of turbo lag – smooth inputs required when inching over rocks, please.

Built on a 116.5-inch wheelbase (a 0.4-inch expansion over the regular four-door), the Raptor enhances the standard Bronco’s frame with additional reinforcements to the shock towers and suspension and steering mounts, as well as further bracing for the skid plates and trailer hitch. The additions yield a 50-percent increase in torsional rigidity, which gives the Fox Live Valve shock absorbers a better stage to perform on. The shocks scan and adjust for road conditions hundreds of times a second, and if they sense a total unload – as if the vehicle were airborne, perhaps – they stiffen to ensure smooth, stable re-entry.

The steering’s beefed-up tie rods and rack-and-pinion internals better compensate for the stresses of the desert and the heavy rolling stock – 37-inch BFGoodrich All-Terrain T/A KO2s and optional beadlock-capable 17-inch wheels. Furthermore, the wheel hubs, bearings, and knuckles come straight from the F-150 Raptor, giving the flagship Bronco a 73.2-inch front and 73.6-inch rear track, numbers that are nearly identical to the pickup and more than 8 inches wider than the standard Bronco.

Words, numbers, specs and fractions and ratios, all meaningless the first time you unleash the 2022 Ford Bronco Raptor on a trail.

Put it all together and you’re left with 13.1 inches of ground clearance, as well as 13.0 inches of front and 14.0 inches of rear suspension travel. Those numbers neatly match the F-150 Raptor with 37-inch tires and are an improvement over even the Bronco Sasquatch, placing the Raptor firmly at the top of the food chain.

Between A Rock And…

Words, numbers, specs and fractions and ratios, all meaningless the first time you unleash the 2022 Ford Bronco Raptor on a trail. And where better to do that than the home of those aforementioned Ultra4 off-road racers, Johnson Valley, California. But this was no mere sight-seeing visit. Ford was going to actually put us on portions of the actual King of the Hammers race course, a tough playground for even a purpose-built off-highway machine. If Ford wanted to prove the Bronco Raptor was worthy of the Ultra4 comparison, they picked a hell of a way to do it.

The first several hours of our day in the hot sun were spent on some of Johnson Valley’s most fearsome rock crawls, including sections of the actual King of the Hammers route. In a show of confidence, Ford even put us on the fearsome “Not Her Problem” trail, a tight and narrow route peppered with boulders the size of Geo Metros. For this incredibly challenging section, our pre-production Broncos went without their removable front bumper ends and side steps, a move that likely prevented some trail damage at the hands of good-for-nothing cads (present company most definitely included).

“Not Her Problem” was easily the hardest-core off-roading I’ve ever done, a white-knuckle experience that forced me to ignore my surroundings and focus only on the trail spotters from Driven Experiences, whose expert guidance helped me coax the Raptor up and over some precarious rock formations. I heard plenty of gut-wrenching scraping sounds as the guides helped me through the path, but they assured me it was merely the hard work of the Raptor’s extensive skid plating, which covers everything from the front bumper to the transfer case. Steel sheets also protect the rear differential, the fuel tank, and even the trailer hitch.

Drenched in sweat – the trail guides had it worse, standing in the triple-digit temperatures all day – I nonetheless got the bumperless Bronco back to its home base in one piece. After thinking it over for some time, I had few complaints about the Bronco’s performance in those tight, rocky confines. Foremost, I wish the throttle were a bit more linear. Typical of turbocharged engines, you have to wait a moment after touching the gas pedal before you know exactly how much power you’ve dialed up, and that makes inching over huge rocks a challenge.

In less terrifying situations, I could better appreciate the Bronco Raptor’s standard, selectable one-pedal trail mode, which helps with that issue by automatically dragging the brakes in part-throttle driving. It takes some getting used to and I wasn’t totally comfortable relying on the feature on “Not Her Problem,” but the one-pedal mode eases some of the demands on the driver once you’ve grown accustomed to it. Ditto the G.O.A.T. Modes drive selector, which features the same Off-Road, Rock, Mud, and Baja settings as the standard Bronco but ratchets the performance parameters up to 11 to suit the Raptor’s stouter performance credentials.

As good as the wide-track Bronco is over rocks, it really comes into its own when given some freedom on a lonely stretch of dirt. For this experience, our group of Raptors convoyed to the nearby Soggy Dry Lake, where Ford had set up a dirt autocross for me to put the off-roader’s full-throttle acceleration, braking, and slalom traction to the test. In these conditions, the 3.0-liter engine’s sharp throttle response made much more sense, allowing me to dial up the turbos and let them rip as I seesawed right-left-right through the dust-covered cones.

But the autocross was a mere appetizer for the main course: a 7-mile loop trail peppered with whoops, washboards, and tank traps. Even at speeds approaching 60 miles per hour, the Bronco felt surefooted and stable, although its short wheelbase relative to the F-150 Raptor meant it could get controllably tail-happy going through corners. Ford nailed the tuning for the Baja G.O.A.T. mode, reducing stability control intervention to allow those big tires to thrash through the sand and keep momentum.

As good as the wide-track Bronco is over rocks, it really comes into its own when given some freedom on a lonely stretch of dirt.

The Fox shocks earn their keep in such conditions, helping keep all four wheels connected to the terra loosa. With so much ground clearance and wheel travel, the Raptor inspires driver confidence in spades, and my hot lap around the sand came and went too quickly. Luckily, the last few hundred yards were an all-out approach to a natural ramp – somehow, Ford convinced its lawyers to let me jump the damn thing a few feet. And true to its Baja reputation, the Bronco Raptor felt nothing but secure upon landing.

As much fun as it is to hoon a fast, flashy SUV across the desert, the majority of Bronco Raptors will spend most of their time on pavement. And the wide-body off-roader is far better than expected on the daily slog. One of the benefits of the long-travel suspension is a smooth, well-damped ride – I shouldn’t have been surprised given how nicely the Fox shocks work under the F-150 Raptor. And while the wide track is a challenge on narrow urban streets, it pays dividends with good stability through corners, especially for a vehicle that sits 77.8 inches tall and has 13.1 inches of clearance under the axles.

What’s more, the alterations Ford made to the steering (partly to compensate for the weight and width of the tires) have given it a more accurate, stable feel when driving down the highway, as well as decent response when going around turns. Otherwise, the usual Bronco traits apply. Plenty of wind noise makes its way through the hardtop at freeway speeds, and there’s abundant tire howl in corners that warn you not to treat your SUV like a hot hatch.

But while many ultra-rugged SUVs feel tippy and unmoored on the pavement, the 2022 Bronco Raptor feels up to the task of an hours-long freeway journey or a trip up a lonely mountain road. That’s also partly due to the pleasant interior, which features Raptor-specific seats that have just the right amount of bolstering to be cozy, but never confining. The steering wheel’s thicker rim feels great, as do the trim-exclusive magnesium shift paddles. Attractive carbon fiber trim appears on the steering wheel, dash grab handles, and center console, with Code Orange accents on the door nets, air vents, and steering wheel.

The nicer interior trim helps soften the blow of the Raptor’s biggest flaw. With a starting price of $70,095 including the $1,595 destination, the tall and tough Bronco has a huge appetite for dollars and cents. My Area 51-painted tester – enhanced with $1,695 beadlock-capable wheels, leather and faux-suede seats (a $2,495 option), and a handful of other add-ons – carried an as-tested price of $76,515. The BRap also likes to wash down those coins with a lot of fuel, with an EPA rating of 15 miles per gallon city, 16 highway, 15 combined.

Just because it competes in a class of one doesn’t make the 2022 Ford Bronco Raptor any less appealing, however. The design brief was to create an off-roader that could just as easily tackle the rocks as it could the open desert, and it’s impossible to argue with the results. The Bronco Raptor is an excellent blend of the Blue Oval’s best-performing products. Big Oly would be proud.