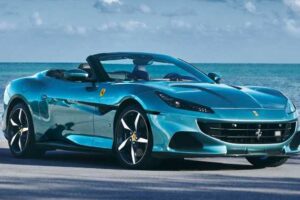 Imagine you’re an editor for FloralTrend, invited on a deluxe junket to Paris to experience a new species of water lily. You arrive only to discover your “experience” involves a dark room full of giant paintings of the flowers done by a mostly blind guy. All you can smell is linseed oil, and they all look blurry. The flowers themselves are just 45 miles away in Giverny, but you’re not allowed to go there. How will you accurately describe these Nymphéas to your readers?

Statistically Florida is the flattest state in the union, and its roads must also rank as the least curvy. Billeting us in the Keys and assigning a strict 500-mile drive limit (with each extra mile costing $25) kiboshed any dreams of finding Ferrari-worthy tarmac any further afield than the infield at Miami-Homestead Speedway—where an $8,500/day rental fee did the kiboshing. Hence, we were mostly constrained to trundling along in thick traffic on the heavily policed Overseas Highway.

So this first drive review won’t divulge how the manettino’s new Race mode setting and Ferrari Dynamic Enhancer collaborate to transform any schmo driver into Ayrton Senna. There will be no gushing hyperbole about how the turbochargers feel and sound spinning 5,000 rpm faster than they used to or how the higher-lift camshaft profiles and hollow valve stems boost responsiveness and extend the torque peak by 500 revs to 5,750 rpm. Those two changes help add 42 horsepower to the engine, 22 of which are then gobbled up by the new gasoline particulate filter, leaving a net gain of 20 horses.

It was similarly tough to assess how the new eight-speed twin-clutch transmission’s tighter gear spacing alters the way the Portofino M attacks a tight series of esses. There’ll be nothing about how its new three-shaft design (down from four), faster-filling clutches, and upgraded controller shrink shift times by as much as 21 percent, nor will ink be spilled discussing whether the 13-15 percent torque reduction applied in the first six gears is discernible. It’s not even possible to comment on the fuel economy achieved in this slow-going (aided by the new gearbox’s 23 percent decrease in energy consumption) because the onboard trip computer doesn’t report fuel economy, and doing math on less than a tank of fuel is inconclusive.

For answers to most of the above, please consult our first drive of the Portofino M’s fixed-roof sibling, the mechanically equivalent 2021 Ferrari Roma, which was experienced in Italy, as God intends.

There was ample opportunity to evaluate the new advanced driver assist systems added this year, which include adaptive cruise control, lane departure warning, high-beam assist, 360-degree surround-view cameras, blind-spot detection, and rear cross-traffic alert, plus automated emergency braking. Sure, Toyotas have offered these technologies for years, but Ferrari just introduced them on the 2019 GTC4Lusso. They remain optional to placate inveterate DIY drivers and those who refuse to mar their Ferrari’s styling with sensors and camera lenses.

The adaptive cruise deserves special commendation for how gently it brakes when encountering slower traffic. This was especially challenging given the Portofino’s giant brakes optimized for erasing three-digit speeds when entering Turn 1 at Fiorano. Sadly, the zillion buttons on the front and back of this steering wheel leave no room for cruise control buttons, which are relegated to a pod at the left. Of course, engaging Race mode turns ACC off, so you could use that as a steering wheel-mounted cancel switch. The surround-view camera proved invaluable at preventing damage to the restyled front and rear fascias and the new forged wheels when parallel parking to visit Hemingway’s polydactyl cats.

Mastering the Ferrari’s user interface consumed much of the time spent droning along at the double-nickel. The touchscreen-and-knob system is more obtuse than those of most mainstream vehicles nowadays, but among its exotic peers it’s downright comprehensible, and it affords considerable customization of what information the occupants can monitor. Yes, the passenger gets a separate screen that can display speedometer/tach readings, audio selections, or a list of the current powertrain and chassis settings.

Early summer in the tropics afforded no opportunity to sample the new Air Scarf neck warmer, but the easily installed wind blocker helped corral some air conditioning in the cockpit with the top down and windows up. This configuration also improved the sound of the JBL Professional audio system when running topless.

Less pleasing—top up or down—was the exhaust note. For 2022, the resonator/muffler units formerly positioned at the very back of the exhaust system are replaced by a new oval-shaped bypass flap and those power-robbing particle filters. In top gear at 60 mph, the engine was often loafing along at 1,800 rpm producing an unpleasant drone. This Ferrari V-8 uses a flat-plane crankshaft design that makes it sound like a pair of four-bangers. Ferrari V-8s used to sound great until they started having to shout through turbos, catalysts, and particle filters.

On the last day, sufficient odometer budget remained to allow a detour to Everglades National Park. En route, there appeared a section of highway with no vehicles or buildings in sight, which afforded a golden opportunity (at long last) to perform three banzai blasts through the gears—one each in Comfort, Sport, and Race modes. Sure enough, each clockwise click of the manettino delivers more wheelspin and quicker shift times, but the exhaust sound remains the same. This exercise wasn’t terribly instructive, but it certainly soothed the soul.

As the wheels retracted on my flight away from this blurry, impressionistic drive impression, we realized that Ferrari had basically forced us to drive its entry-level convertible (just $226,000 to start!) precisely the way enthusiasts like us who can’t afford Ferraris presume owners will drive them most of the time—like a lame poseur.